This photo of Imagine Dragons' Dan Reynolds is even more amazing with context. 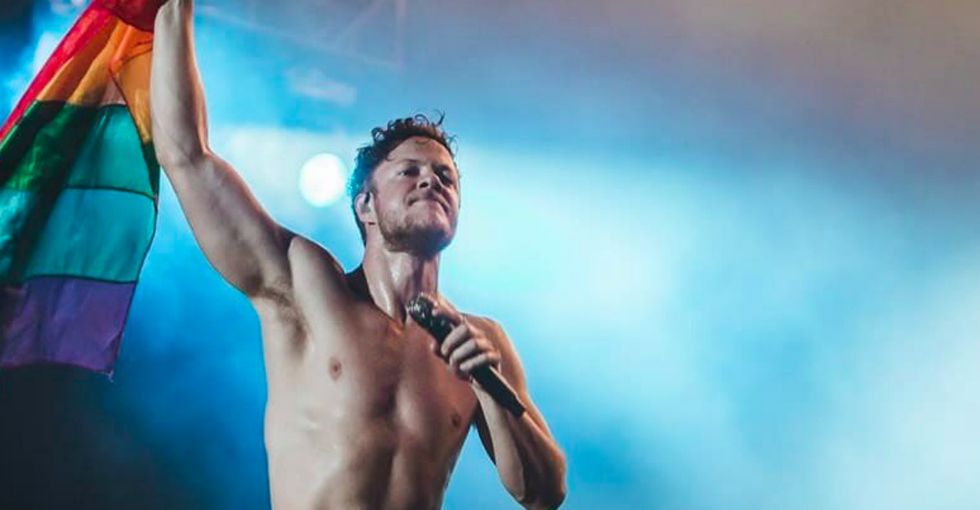 If you haven't heard of Dan Reynolds, you've at least heard his voice on the radio — probably many, many times.

Right now, the band is performing at venues around the world before bringing their tour home to North America this summer. And at Lollapalooza Brasil in São Paulo over the weekend of March 23, 2018, Reynolds — who identifies as straight and cisgender — did something pretty fantastic during his performance: He took out a rainbow flag and waved it around the stage.

In a heartfelt post following the performance, Reynolds called on our world to "fully embrace" LGBTQ youth.

He also explained how he sees "loving" someone and truly "accepting" them as two different things.

"To 'accept' does not simply mean to 'love,'" Reynolds argued. "It means you give true validity and fully embrace and support diverse sexual orientations and do not see ones sexuality as 'incorrect' or 'sinful.' Love is an empty word otherwise."

The message is an especially telling one in Brazil right now.

While São Paulo's gay pride is often billed as the world's largest, and Brazil offers some protections and rights to LGBTQ people — such as marriage equality — a recent surge in anti-LGBTQ violence has the queer community in Brazil on edge.

At least 445 LGBTQ Brazilians died directly due to homophobia or transphobia last year, according to watchdog group Grupo Gay de Bahia — the highest ever on record. The organization tracked 387 murders attributed to hate crimes and 58 suicides inextricably tied to anti-LGBTQ sentiment.

Some advocates claim the alarming figures correlate with a steep rise in ultraconservative political leaders using their platforms to promote bigotry. Luiz Mott, president of Grupo Gay de Bahia, told The Guardian in January that increasing evangelical influence in Brazil is to blame for the violence: "It’s a discourse that destroys solidarity and equates LGBT people to animals."

With the Trump administration in power — along with a Republican-controlled Congress — LGBTQ advocates in the U.S. worry the same effect is happening in America. A recent study by GLAAD found that, for the first time since 2014, more Americans report feeling uncomfortable with their LGBTQ neighbors.

Reynolds' message of acceptance needs to be heard all around the world — even in the countries where it's deemed less vital today.

Reynolds at  The Trevor Project's 2017 TrevorLIVE L.A. event, where he was honored with the Hero Award for his support for LGBTQ youth. Photo by Alberto E. Rodriguez/Getty Images.

"To be gay is beautiful and right and perfect," Reynolds told Billboard in 2017. "To tell someone they need to change their inner-most being is setting up someone for an unhealthy life and unhealthy foundation."

If you are an LGBTQ youth and need some help, don't hesitate to reach out to your friends at The Trevor Project.