This is the best mother-daughter chat about the tampon aisle ever. Period. 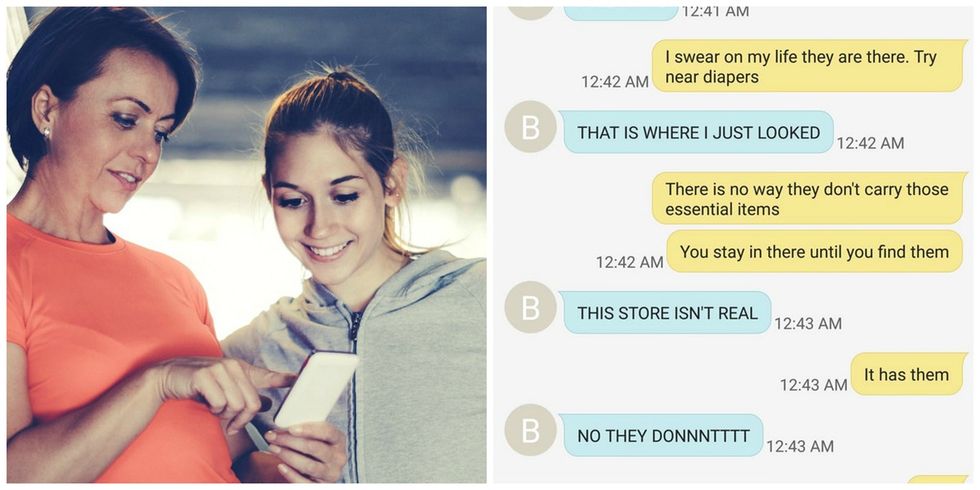 This article originally appeared on 09.14.16

Belinda Hankins and her 13-year-old daughter, Bella, seem to have a great relationship, one that is often played out over text message.

She won't answer me.
Posted by Belinda Hankins on Monday, September 12, 2016

Sure they play around like most teens and parents do, but in between the joking and stealing of desserts, they're incredibly open and honest with each other. This is key, especially since Melinda is a single parent and thus is the designated teacher of "the ways of the world."

But, wow, she is a champ at doing just that in the chillest way possible. Of course, it helps having an incredibly self-aware daughter who has grown up knowing she can be super real with her mom.

Case in point, this truly epic text exchange took place over the weekend while Bella was hunting for tampons at the store.

"THIS was the highlight of my parenting week. Sending my 13-year-old daughter into the store for (whispers) 'feminine hygiene products,' and having the following text exchange."

Let's give this the fanfare it deserves.

Every woman, whether she's 13 or 30 has said or thought "THEY'RE NOT HERRREEEEEE" while standing in an aisle, desperately searching for period products. It's like they're trying to make it a scavenger hunt for which we did not sign up.

Act 2: Everything is a lie.

That's right, Bella. Vagina, like Voldemort, is a word some people refuse to invoke because they're terrified what great, untamed powers doing so might unleash.

Only a truly great mom could put this in such a way that inspires laughter and fist-pumping agreement at the same time.

A brilliant conclusion, mom/daughter solidarity AND an accurate map that illustrates what women encounter on a daily basis? If this exchange were a stage play, it would receive five stars.

And many others have agreed; the Facebook post has already been shared over 57,000 times in just two days.

So hip-hip-hooray for moms like Belinda who are candid with their kids on issues big and small and teach them how to be strong using humor and real talk.

The more hilarious conversations like Belinda's and Bella's about vaginas and the patriarchy that there are in the world, the better.