This hellish spider from nightmare-land may be man's other best friend.

Warning: You may hate spiders a little less after reading this story. 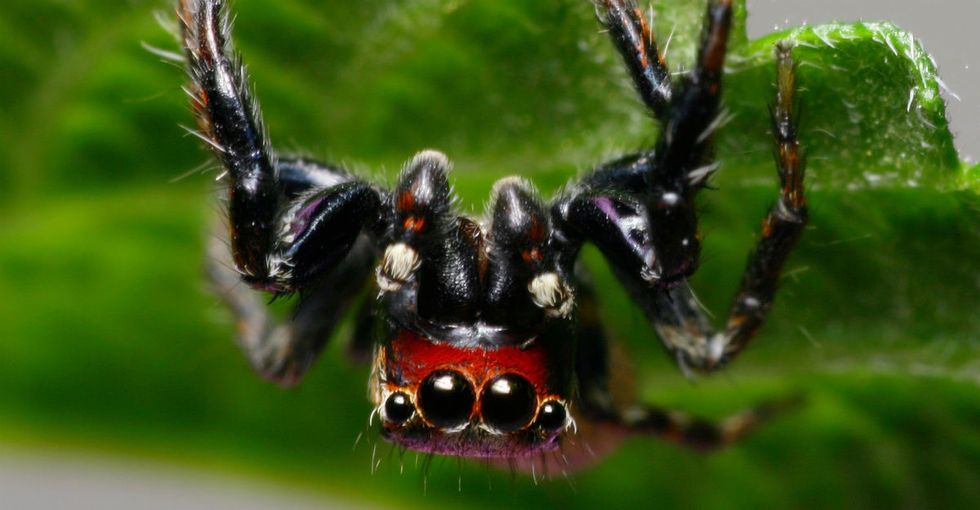 This is the Evarcha culicivora, a spider native to East Africa.

Or, in layman's terms, a horrifying beast from the depths of hell.

Here are some tidbits about the Evarcha culicivora that'll keep you up at night:

However, this article has been nothing but fear-mongering thus far (sorry!). Because while the Evarcha culicivora may seem like something that belongs in that "Arachnophobia" movie, it's actually completely harmless to us.

In fact, these spiders could help save lives.

The Evarcha culicivora could play a helpful role in the fight against malaria.

A new study by researchers at New Zealand's University of Canterbury and the International Center of Insect Physiology and Ecology looked at what these spiders like to eat. They found, reiterating what previous studies have also, that these "mosquito terminators" shouldn't be feared at all — they should be viewed as friends.

Female Anopheles mosquitoes carry and spread malaria. It's a preventable yet deadly disease that's responsible for about 500,000 deaths a year. Even though that figure has dropped significantly since 2000, allowing half a million preventable deaths is still, by any measure, unacceptable.

Here's the good news: The Evarcha culicivora has a specialized craving for those female Anopheles mosquitoes.

Feasting on our blood gives these spiders an odor that attracts mates. So, naturally, they're gunning for it. But earlier — when I said these spiders love our blood — I didn't say it had to be in us. Funny story: These spiders' mouths aren't even equipped to bite humans.

They can, however, snack on human blood carried by malaria-transmitting mosquitoes.

"This is unique," Fiona Cross, who co-authored the study, told The Guardian. "There's no other animal that targets its prey based on what that prey has eaten."

So yes, the recent study further confirms these terrifying beasts from hell may actually be a godsend. But there are still hurdles to clear before we'll see a substantial impact on malaria infections.

For one: Disliking spiders is a pretty universal feeling, as it turns out. While it's actually a blessing in disguise, people hate the fact that a creepy creature like Evarcha culicivora wants to hang out in their homes. Other mosquito-eating spiders — like, say, Paracyrba wanlessi, which prefers living in bamboo stems and feasting on mosquito larvae in water — have housing preferences and eating habits that make them far less effective in the fight against malaria.

Cross pointed out humans' general disdain for eight-legged predators is fairly ingrained: “People need to know that these organisms are harmless and will not attack them."

That may be a tough fear to overcome for many of us. But I'd say it's a fear worth conquering if it means a life saved from malaria.