This gun store owner has a radical plan for preventing suicides by gun. 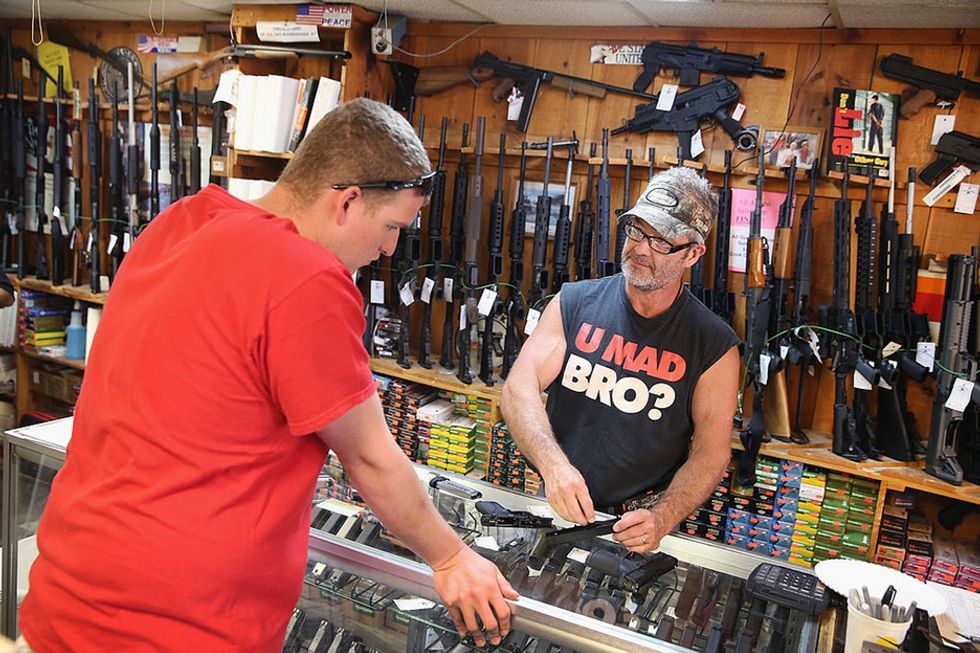 Ralph Demicco was sitting in his sporting goods shop one Saturday morning when he noticed a customer who was acting slightly ... off.

She was conspicuously overdressed and refused to make eye contact when she came up to the counter and asked to look at a pistol.

Demicco asked the woman if she should really be buying a gun — and she immediately broke down crying. He told WBUR that he brought her into the back room of the store, where she confided that she was planning to kill herself. He let her stay there and collect herself while he reached out to her doctor.

Demicco may have saved a life that day. But he has good reason to be so careful.

During one week in 2009, three different people bought guns at different times from Demicco's store.

Each of them used the gun they'd bought to take their own life later that same day.

"Apparently our marginal screening process did not pick up on any of these individuals," Demicco told The Trace in 2016. Unfortunately, the National Instant Criminal Background Check System only flags people who've been committed to a mental institution against their own will.

So, technically speaking, the employees at the store did everything they were supposed to. But according to the American Foundation for Suicide Prevention, guns are responsible for nearly half of the more than 40,000 suicides each year, and suicide accounted for almost two-thirds of the total gun deaths in the country — meaning it's an even bigger problem than the homicides and mass shootings people tend to hear about.

In 2011, Demicco decided to do something about this.

He teamed up with public health professionals and local firearm dealers to establish the New Hampshire Firearm Safety Coalition, taking an active role in preventing suicides.

It began with a simple plan to reach out to all 67 gun shops in New Hampshire — first to start a conversation, then to see if they'd be willing to display posters or pamphlets in their store to raise awareness about suicide. The NHFSC also provides training to firearms dealers to help them spot warning signs in customers.

Within a year, half of the firearm retailers in the state were on board with the cause.

One of the posters, which includes a list of warning signs to look out for.

"We’re learning about warning signs and spreading an additional message of gun safety to our customers," Demicco said in a press release.

"If you’re worried someone is suicidal, offer to hold on to their guns until they are in a better place."

"It's not that gun owners are more likely to be suicidal or depressed," coalition co-chair Elaine Frank added in an interview with USA Today. "It's that guns are the most lethal way for someone to take their own life."

She's right: Most suicides are fairly impulsive, and 70% of people who survive an attempt won't try again. Unfortunately, only about 10% of people survive a suicide attempt by gun. Which makes gun intervention that much more important.

Another NHFSC pamphlet, which aims to normalize the additional gun safety rule of "consider temporary off-site storage if a family member may be suicidal."

While New Hampshire may have been the first state to launch this kind of program, the idea is starting to make its way around the country.

And the results are looking pretty good.

A new law passed in Washington state in March 2016 with the support of both the NRA and the Second Amendment Foundation. The law will increase training and messaging about suicide prevention among gun dealers and other firearm professionals, as well as in all gun sport safety materials.

Even more recently, the American Foundation for Suicide Prevention teamed up with the National Shooting Sports Foundation to research, create, and implement a plan that reduces suicide rates 20% by 2025.

The official AFSP infographic for Project 2025.

Overall, more than two dozen states have launched programs similar to the one in New Hampshire in the last five years.

According to the Trace, this includes famously pro-gun states with higher suicide rates like Alabama, New Mexico, Kentucky, and Colorado.

There has been some resistance, of course.

"I think there’s a fear among some stores — it’s been expressed vehemently — that it’s just another backdoor attempt at grabbing guns," said one New Hampshire firearm dealer. "You gotta convince people that this isn’t about gun control, it’s suicide control."

Mental health and gun deaths are both complicated issues.

There's no one-size-fits-all-solution to either one, of course, but it's encouraging that people are working toward systemic solutions.

Perhaps the most inspiring thing about these kinds of programs is the way they bring people together from all across the spectrum.

As one Harvard researcher who was following the New Hampshire coalition told U.S. News & World Report: "The suicide prevention people were largely not gun owners. The gun owners on that committee didn’t have a background on mental health or suicide issues. We learned so much from each other."

When it comes to saving lives, actions speak much louder than words. And as these initiatives prove, that's something everyone can agree on.