This family is the face of Venezuela's historic humanitarian crisis. 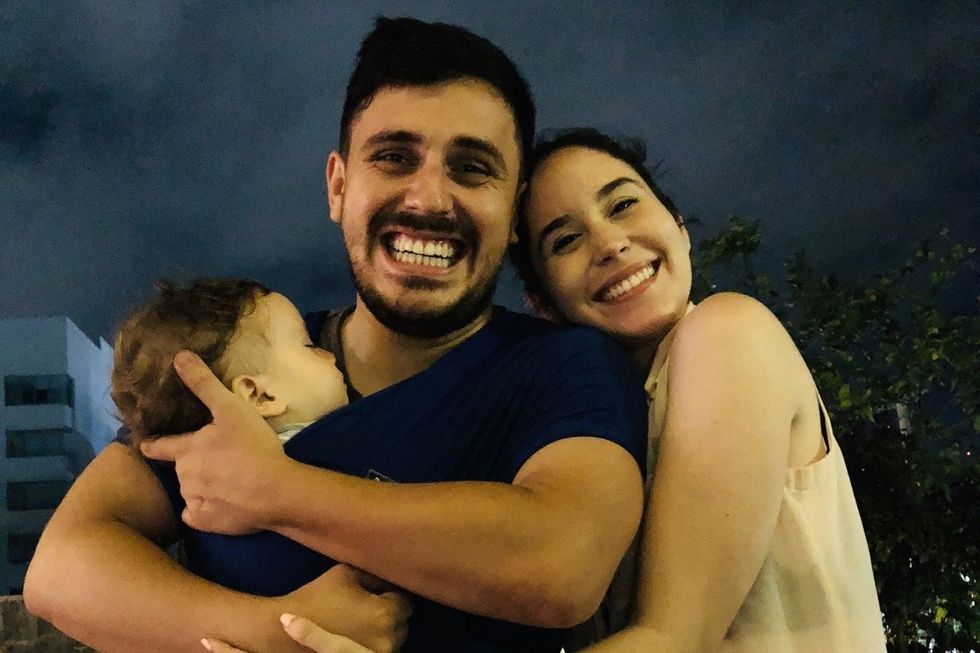 Luis and Jude Vivas, with their son, Luis Jr.

Editor's note: If you want to help the Vivas family, you can contribute directly to their GoFundMe campaign here. The campaign has been verified by the GoFundMe team, with 100% of the proceeds going toward immediate food, medical and housing needs for the family.

When I connect with Jude and Luis Vivas, the couple is resting inside a tiny motel room in  Cúcuta, Colombia. The width of the room barely holds a small, twin sized bed that is covered in the six backpacks they carried across the Venezuelan border with their young son, Luis Jr.

“We are very tired,” Jude says, translating the words of her husband into English. “Tired of not knowing what is going to happen.”

The Vivas family are part of the estimated four million refugees who have left Venezuela since 1999. A recent poll found 57 percent of citizens say they want to leave but can’t.

Getting across the border was a perilous journey. Jude and Luis faced obstacles every step of the way, including corrupt government officials who demanded thousands in U.S. dollars to process their passports. They couldn’t even carry proper suitcases across the border, which would make them targets for assassination from supporters of Nicolás Maduro’s administration.

While they are some of the “lucky” ones who have made it out of Venezuela safely, their situation is far from resolved as the largest refugee crisis in the Americas continues to unfold under the political unrest first started during the Bolivian Revolution by Hugo Chávez and continuing under Maduro.

“We had held onto a lot of hope for the country,” Jude says. “But nothing happened. Everything became worse and worse. When I became pregnant, everything changed completely.”

For those stuck in Venezuela, there is little that outsiders can do to help. But a retired American military veteran came up with a generous and compassionate plan to help the Vivas family.

Venezuelan migrants wait in line to receive food outside La Divina Pastora shelter in Villa del Rosario, Colombia, in the border with Venezuela, on February 13, 2019. (Photo by LUIS ROBAYO/AFP/Getty Images).

Dan Hall was recently diagnosed with pulmonary fibrosis, a chronic and progressive lung disease. The military veteran was told by his doctor to find new hobbies like chess that would help focus his mind.

Hall decided to start taking Spanish language lessons. He became part of a larger group of around 730 people that was being tutored by Jude and other instructors. As the crisis in Venezuela continued to impact Jude and her family, Dan realized that even the income she received from him and other students was largely going nowhere.

“She was working eight hours a day and making around the equivalent of $25 a month,” Hall said. “Forget paying rent and buying groceries. It was barely enough to afford diapers.”

And if she worked with private citizens to convert her PayPal funds into physical money, they often charged upwards of 60 percent to facilitate the transaction.

That’s when Hall decided to take action. He launched a GoFundMe to help raise funds for the Vivas family to help cover some of their relocation costs, including government fees, transportation, food supplies and temporary housing.

Jude’s language tutoring allows her to work from virtually anywhere she can get an Internet connection and her husband Luis is a trained chef. Their hope is that once they settle into a safe and normal situation in Colombia they will both quickly be able to return to making a living to help provide for their family.

Hall has worked directly with GoFundMe to ensure that all of the funds raised go directly to the Vivas family and are not impacted by the current political crisis in Venezuela. Despite his own health challenges, Hall is also using his own money to fly directly to Bogota in early March to deliver the funds directly to Jude and Luis.

“They are very tight-fisted,” Hall says. “They’ve only asked for $250 to buy a Luis a coat in Bogota, for bus tickets and some food.”

One bright spot in the crisis has been the leading role Colombia has taken to help refugees.

In our conversations, Hall and the Vivas family were quick to express gratitude to the government and people of Colombia. Even though their escape from Venezuela has been treacherous, they say it never could have happened without knowing they would find safe harbor once they crossed the border.

And in an age when so many countries are ignoring their humanitarian obligations to refugees, Colombia has stood out as a beacon for hope and a shining example of how to do things right in a crisis.

A woman and a baby wait in Cucuta, Colombia, after crossing the Simon Bolivar International bridge from San Antonio de Tachira, in Venezuela, on February 20, 2019. - Venezuelan opposition leader Juan Guaido forged ahead Wednesday with plans to bring US medical and food aid into the country in defiance of the military-backed government, raising fears of possible weekend confrontations. (Photo by Luis ROBAYO / AFP) (Photo by LUIS ROBAYO/Getty Images).

There’s no end in sight to the turmoil in Venezuela but helping one family can shine a spotlight on the corruption and historic humanitarian crisis that is unfolding. There is a way to help.

Speaking to the Vivas family, it’s clear they wish they were not in the position of asking for outside help from strangers. But Jude and Luis are trained professionals, proud of the work they do and eager to get back to work.

But they’re also incredibly grateful for the people who have donated already and hope that their story will end up helping others, along with educating people who don’t really understand why what’s happening in Venezuela is so important.

When I ask Jude how many of their friends and family have been affected by the crisis, she and Luis both laugh before stating flatly that every single one of their friends has been forced to flee the country.

“In three years, literally all of our friends have had to leave the country,” Jude says. “We try to make little jokes with each other about how we showed up all of their ‘goodbye parties’ but there wasn’t anyone left to attend ours.”

Jude says that when she and Luis crossed a bridge into Colombia they were surrounded by entire families seeking refuge.

“Our families are sad but they know this is the best for us,” she said.

When I asked Jude and Luis if they are hopeful that they’ll be able to return to Venezuela sometime soon, they sound doubtful.

“It’s not that we’ve lost our faith in Venezuela, it’s a beautiful place and anyone who has been forced to leave their country knows the feeling of wanting to return and be buried in the place where they were born,” she says. “But they have changed the culture. We don’t want that lifestyle for our son.”

Luis adds that he thinks it will take at least 10 years to put an end to the systemic government corruption that has transformed Venezuela from a country with a soaring economy and culture to one on the brink of collapse. “We need to educate the children and make the laws work,” he says.

Hall says that his primary mission is to help the Vivas family make it out of Venezuela safely and start their new lives in Colombia. He also jokes that he’d like to get his Spanish language group back on schedule. But he says that helping organize this fundraiser, the first time he’s ever done something like this, has changed his views on refugee crises around the world.

“One of the things I’ve learned is how difficult it is to help a refugee. It’s very easy to help an organization but it’s nearly impossible to help an individual refugee or family,” he said. “We can’t help millions but we can help these three.”