These worms get under your skin, literally. The hero fighting them? Jimmy Freaking Carter.

This is shaping up to be one of the biggest public health success stories of our time. 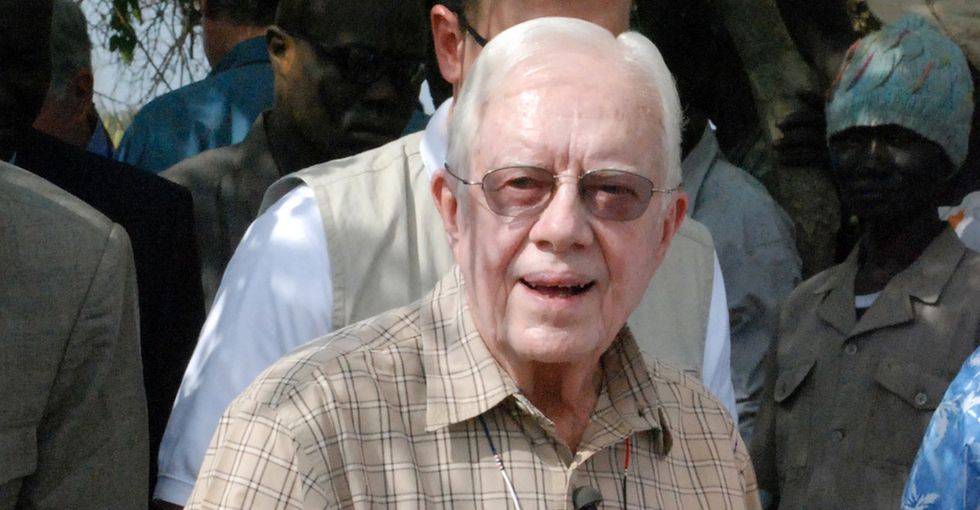 If you lived in northeastern Uganda 25 years ago and drank from public water sources, there was a pretty high chance that you'd contract a common but excruciating illness.

Guinea worm disease starts with a pain in your leg or foot, then a blister. Eventually, a parasite emerges from the wound. During this time, the pain is often so intense that you might not be able to work, take care of your family, or even walk.

It’s horrifying to even think about. But guinea worm has been a thing of the past for Ugandans since 2009.

This change from full-blown public health crisis to nearly eradicated in only 30 years is a huge, life-changing deal for communities across the globe. And former President Jimmy Carter made it happen.

Carter visited Lojura, Sudan, in 2010 and was struck by how awful guinea worm is. After this visit, he made eradicating the disease his personal mission. Photo by Peter Martell/ AFP Photo/ Getty Images.

Carter’s nonprofit, The Carter Center, launched its guinea worm eradication program 30 years ago, in 1986. When Carter decided to make guinea worm his cause, there were about 3.5 million people suffering from guinea worm infections — and just as daunting, there were no vaccines or medicines to treat it.

How did it happen? Hard work, smart public education campaigns, and lots of clean water.

Guinea worm spreads through water. About a year after someone drinks water infected with guinea worm larvae, they get a blister, and the parasite begins to come out of the body. So the most important step was to keep guinea worm larvae out of drinking water.

The Carter Center built wells, gave water filters to villages, and worked to keep people with infections from bathing in water sources.

“I’ve sometimes had thousands of students from schools lined up outside on the highway when I come into the village. In Nigeria, they had big signs that said, ‘Watch out, Guinea worm, here comes Jimmy Carter!’ That makes you feel good,” Carter said in a recent NPR interview.

There are only four countries left with documented guinea worm cases, which means we could see its end very soon. We went from more than 3 million infections to fewer than 25 in just three decades — solely from effective prevention methods.

This is already shaping up to be one of the biggest public health success stories since, well, the beginning of time.

As it approaches the eradication of guinea worm disease, the Carter Center has expanded its focus to include cultivating peace, protecting human rights, and eliminating other harmful diseases in the same way.

“I would like the last guinea worm to die before I do,” Carter said at a news conference last August.