These lifelike murals have communities buzzing about honeybees. 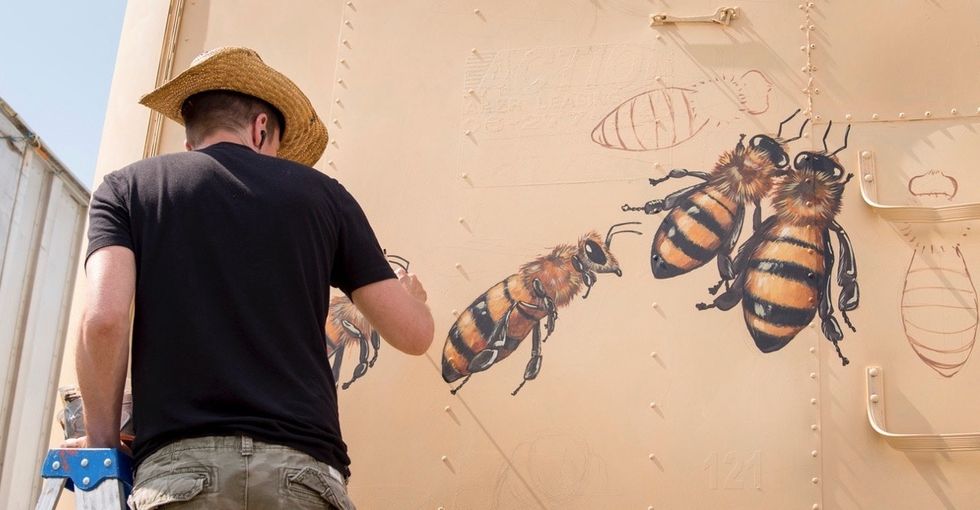 Big ones. Small ones. Queens. Workers. Flying and at rest. He paints all of them with skill, love, and care. He's been painting murals for nearly 25 years, but this is his biggest job yet. It's the one he was born to do. And he's got a few million tiny, buzzing fans rooting him on.

‌Photo by The Good of the Hive, used with permission.

Close to a decade ago, a slow-moving honeybee flew in through the window of Willey's apartment and landed softly in the middle of the room. Weak and tired, the pollinator posed no threat.

"I got down on the floor and hung out with this bee," he said. He studied her and got up close, the first time he'd ever done so. When the honeybee expired a few hours later, he placed it outside and set about learning why this happened.

A quick search lead him to information on colony collapse disorder, when workers bees from a colony suddenly disappear and die off for no clear reason. Some bee experts believe honeybees have a behavior known as altruistic suicide. A bee that's sick will fly off to die on its own rather than jeopardize the health of the nest. That may be why beekeepers weren't finding dead bees and why Willey had one in his apartment.

But the experts don't know why this is happening. And while they get to the bottom of it, Willey did what any passionate person would do — he dropped everything to take on the project of his life.

Willey committed to painting 50,000 bees on murals around the world. He dubbed his initiative The Good of the Hive.

Each mural is unique to its location. The bees are highly detailed and meticulously painted.

Willey spends months painting each mural. And even more time working with communities, schools, and businesses to come up with the space, funding, and proper permissions.

‌Photo by The Good of the Hive, used with permission.

He also stops frequently to talk and spread awareness about pollinators along the way.

Willey's work is found on businesses, a school, a fire station and even a tractor trailer.

Every surface has potential.

His medium packs the message: We've got to come together to save these creatures.

And while raising awareness about the plight of pollinators is Willey's chief aim, he has a secondary goal as well.

As he travels from town to town, he's meeting people of all stripes. Together they talk bees, occasionally break bread, and get to know one another. Already, the murals are bringing people together.

"The other thing I'm learning ... through this work is the incredible possibility of connection that [bees] facilitate," he said. "There's the design, there's the art, there's all that. But the basic, basic nature of it is 'Stand and paint bees. And talk to people about bees.'"

Thank you to these two friendly faces for treating me to my first fried green tomato sliders today! I have total bee tee envy!!! #thegoodofthehive #bees #burtsbees #murals

Between his detailed murals, great conversations, and lots of fundraising, Willey believes his project will take 10 to 11 years. But there's plenty you can do right now.

To support and encourage honeybees in your yard or community, talk to your local nursery about native bee-friendly plants. A few simple additions can make your yard a welcome place for pollinators of all stripes.

"I am trying to make a point that these bees are like treasure," Willey said. "They should be invited into your yard, honored in your yard with a section of it that has specific flowers [for] the local bee population."

Planting flowers at your home, school, or neighborhood is also a great project for kids and communities.

"It's so great for teaching kids! They love playing in the dirt," Willey said. "And even planning it with your neighbors and saying, 'Our block is going to become bee-friendly.'"

On the surface, it's an art project about honeybees. But it's always been much more than that.

"We have to start seeing the world like a hive," Willey said in a video for the project. "Bees and people, we're all in it together."