The wonderful story of a teen who found his place as his high school's mascot.

'He's not afraid of crowds anymore.' 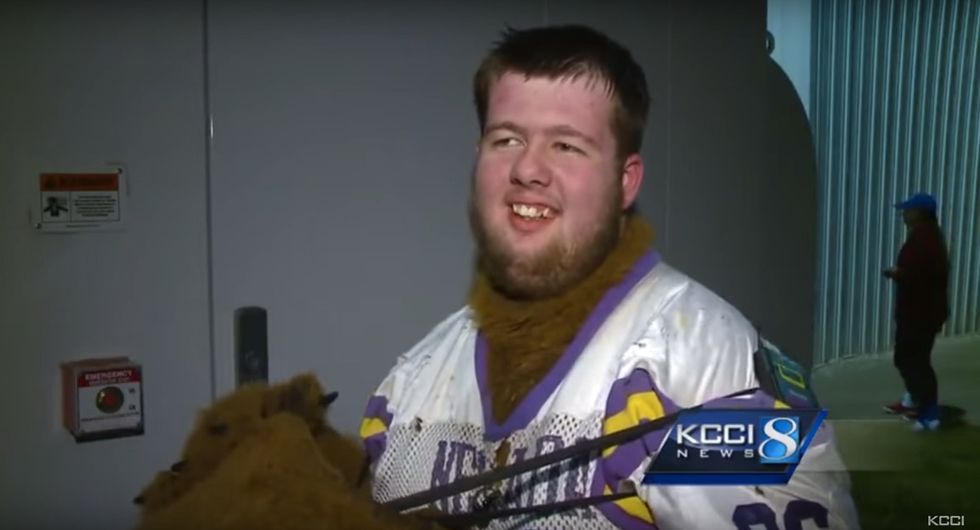 Caleb has autism spectrum disorder. And just a few years ago, the last place you'd find him is relishing in the sideline spotlight.

For him, partaking in large group activities wasn't a fun affair.

"He was terrified just to walk into a big crowd in the gym," his father, Keith Popejoy, told KCCI 8 News of his high school senior son. "A group like this would have scared him."

"I get Cubbie on, come out here, and give people high fives and hugs." — Caleb Popejoy

It's not uncommon for people with autism to be in Caleb's boat. For many people living with it, autism can affect their sensory system. So things like loud noises, certain fabrics, or different smells can cause unpleasant experiences.

So being Cubbie? Under the Friday night lights? In front of the whole town? For Caleb, something like that would usually be way out of the question.

But he'd spotted Cubbie's mask in the school's office as a freshman, and something just ... clicked.

He took an interest in becoming his school's mascot, and — although his parents were hesitant at first — the rest is mascot history.

"We were there, right by his side, when he first did it," Caleb's mom, Lana Popejoy, told KCCI 8 News. "We thought he was going to be nervous."

But that wasn't the case.

"I get Cubbie on, come out here and give people high fives and hugs," Caleb explained with a smile.

The best part? Being Cubbie has made those big crowds a whole lot less scary for Caleb — even without the mask.

“He's gotten used to people now," Lana said, noting the transformation she's seen in him since he began high school. "He can greet people, he can talk to people. He's not afraid of crowds anymore."

The whole experience has made Caleb feel "excited and happy" (which goes without saying, if you saw that look on his face).

Sometimes it takes putting on a costume to help us feel like our true selves.