The human remains just found at Stonehenge could change how we see the ancient world. 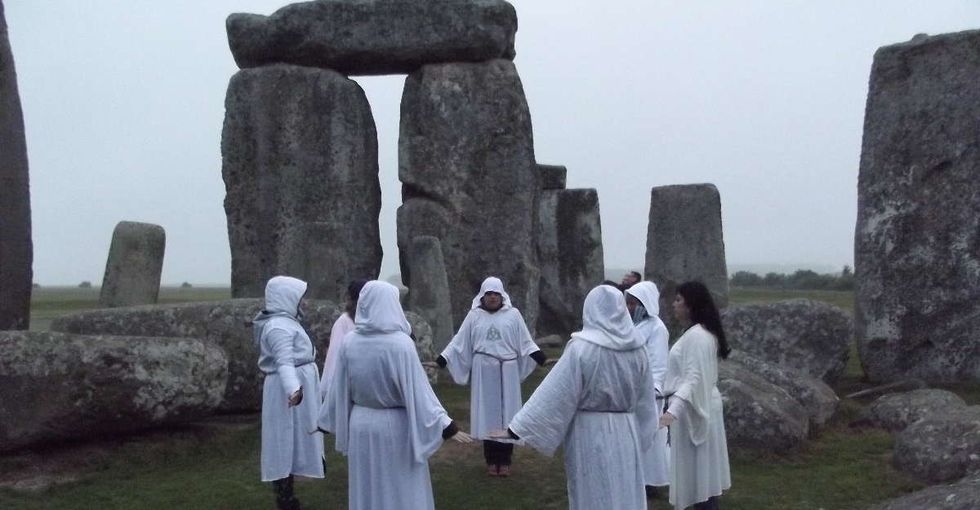 The mysterious ring of stones is clearly far more than just the subject of hilarious Norwegian comedy songs. Photo by Velvet/Wikimedia Commons.

Was it an ancient observatory? A concert venue? A sort of holistic hospital? Who built it? Early Britons? Druids? Merlin? Aliens?

While the jury is, largely, still out, many archeologists believe the ring of stones functioned, at least in part, as a a cemetery for notable people.

Though archeologists have known there were human remains under Stonehenge for around 100 years, no one thought much about them at first.

That all changed in 2013, when researchers discovered the remnants of dozens of individuals buried under and around the stone ring.

For decades, archeologists assumed only men were buried at site, which would seem to jibe with the notion that those entombed at Stonehenge were prominent people in the neolithic world.

Roughly half of the (presumed) ancient leaders and celebrities buried under Stonehenge appear to be women.

Women! Photo by The White House/Flickr.

And now, there's even more evidence. Several weeks ago, the remains of 14 more women (and nine men) were excavated by researchers, according to Jennifer Viegas of Discovery News.

Like the rest of the remains found at Stonehenge, all of these women were buried between 3100 and 2140 B.C.

What, exactly, does this mean about women in the Stone Age?

No one really knows 100% for sure. Perhaps the women buried at Stonehenge were leaders in society. Perhaps they were family members of high status men. They might have had equal social standing in society, or not quite.

The one thing that seems pretty clear to researchers, though?

"The archaeology now shows that as far as the burials go, women were as prominent there as men. This contrasts with the earlier burial mounds, where men seem to be more prominent," archeologist Mike Pitts told Discovery News.

While it's still impossible to draw too many specific conclusions about the structure of ancient Briton society, the discovery is a reminder that progress toward gender equality hasn't been a straight line. In reality, it's been more like a wave.

According to Pitts, "Historical evidence has shown that women’s status has gone up and down quite noticeably at different times in the past."

While men dominated most early agricultural societies, some studies suggest that gender equality was common in hunter-gatherer communities prior to the advent of farming. In Western culture, "traditional" gender roles were somewhat less clearly defined and enforced prior to the Victorian period when they were codified and entrenched, remaining rigid until the early 20th century, when they began to relax again.

"As the burials go, women were as prominent there as men."

It's unclear whether women in third millennium B.C. England had anything resembling actual equality while they were alive, but the evidence at least suggests their lives were equally honored after death.

Perhaps once we learn more about the women and men buried under Stonehenge, we'll have to stop describing regressive cultural attitudes as "Stone Age" like it's a bad thing.

At the very least, this latest discovery means the mystery of Stonehenge is slightly less mysterious now. More and more, it appears that the ancient wonder is a monument to men and women, living side-by-side and working together.

That deserves a hoorah.

See what researchers found when they tested a bottle of Fiji Water against a glass of tap water.

Is bottled water REALLY all that bad?

This article originally appeared on 5.7.15

The Story of Bottled Water www.youtube.com

Here are six facts from the video above by The Story of Stuff Project that I'll definitely remember next time I'm tempted to buy bottled water.

1. Bottled water is more expensive than tap water (and not just a little).

Keep Reading Show less
women and girls
Get stories worth sharing delivered to your inbox
By signing up you agree to Upworthy's privacy policy.
Trending Stories
Culture

A 9-year-old goes in on standardized tests and ends with the best mic drop of all time.

A 6-Year-Old Asks ​Neil DeGrasse Tyson An Adorable Question. He Gives Her An Awesome Answer.