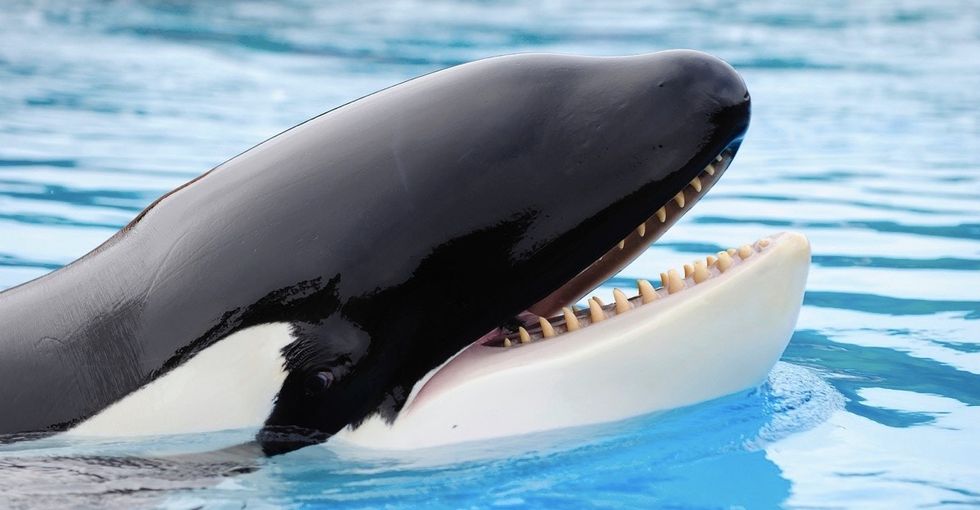 We already know that whales and dolphins are pretty intelligent.

Bottlenose dolphins use sponges as protective face masks to probe the sea floor without damaging their snoots.

Orca whales have unique teamwork-reliant hunting strategies, like creating waves to wash seals off ice floes. And different orca whale populations seem to have their own distinct cultures too.

A new report suggests that those smarts might extend to emotions too.

A recent paper in the Journal of Mammalogy documented this apparent mourning behavior in seven species of whale and dolphin, including spinner dolphins, Indo-Pacific bottlenose dolphins, orca whales, and sperm whales.

Spinner dolphins are named after their amazing, acrobatic spins. Photo from iStock.

Basically, scientists noticed that adult whales and dolphins tried to care for and nurture their dead young, a behavior that might represent a form of grieving.

"They are mourning," the paper's co-author Melissa Reggente told National Geographic. "They are in pain and stressed. They know something is wrong."

In one instance, in the Red Sea off Egypt, a small boat of biologists saw an adult Indo-Pacific bottlenose dolphin swimming, pushing at, and touching a recently deceased juvenile dolphin.

The biologists watched for a while before eventually fixing a rope around the juvenile and towing it ashore, where it was buried.

Even then, though, the adult dolphin followed them, swimming around and touching the juvenile until the water became too shallow for the dolphin to go on. But even after the juvenile had been buried, the adult stayed around the area.

We've seen what might be mourning behavior in other animals before.

An elephant at a zoo in Emmen, Netherlands, mourns the death of a friend. Olaf Kraak/AFP/Getty Images.

Elephants have been observed gently touching the bones of the dead. In his book "Elephant Destiny," elephant researcher Martin Meredith retold a story about an elephant family weeping and covering a recently dead matriarch with branches.

We've observed nurturing dead young in other animals too, like chimpanzees, but also in animals such as giraffes and manatees as well.

This new research is unfortunately pretty timely, considering that many species of whale and dolphin have a lot to grieve about lately.

Overzealous whaling in the 17th-20th centuries drove many whale species to the brink of extinction. Today, whaling is rare. But pollution, industrialization, and climate change still threaten these kinds of sea creatures.

Plus, eight of the 13 big whale species are currently endangered or critically endangered, including blue whales and fin whales. Many others are threatened or vulnerable.

Ascribing human emotions to animals is tricky, but we already know they're complex, emotional creatures.

Though I'd wager that nearly all pet owners can name times when their animals were anxious or joyful or mourning, scientists are usually hesitant to pin human emotions on animals.

This is mostly because our own human emotions are so tied into our culture that it'd be a little presumptuous to think animal emotions would look or feel exactly like ours.

But it would probably be hard to find someone arguing that big, social animals like whales don't feel something.

This report adds weight to the idea that grief is a common and widespread behavior in long-lived, social species.

The same parts of our brains that process emotions are shared by a wide range of animals.

And if animals really do feel emotions, maybe we need to think more about how we're treating the other species on the planet too.