'Sorry if I was a little insistent,' he said later — after forcing her and changing her life forever.

TRIGGER WARNING: This short but powerful essay by Robyn Swirling on rape may be upsetting for sexual assault survivors. Proceed as you see fit. 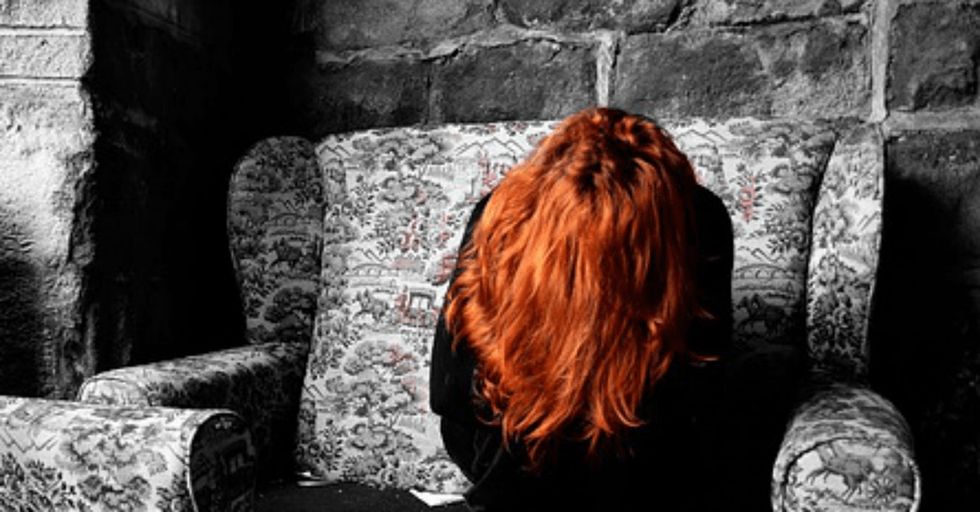 "Memories Outside the Mind," by Robyn Swirling

I don't quite know what happened. I mean, I know. I just don't remember everything.

I remember "just go down on me, just for a minute, it'll help me sleep," and his hands entangled in my hair as he pushed my head toward him. I remember my back against the full-length mirror, the frame digging into my shoulder blade, the pressure of his forearm across my chest as his fingers dug into me. I remember saying no as forcefully as I could, as often as I could, but as quietly as I could because he warned me not to wake his roommate and that somehow seemed more important in that moment than the fact that what the roommate would have heard was me begging him to get out from inside me. I remember laying in bed back in my room with tears streaming silently down my face, anxious not to wake my own roommate for fear that I'd have to tell her what had just happened, though the word "rape" was still days away from reaching my lips.

But I don't remember if it was a Thursday or a Monday. I don't remember the date — I think it was late September, but it might have been early October. I don't remember exactly how many days I laid in my dorm room bed, my eyes shut tight against light and friends and classes and obligations. Once I told my roommate and close friends, I don't remember how many days — weeks? — it was before they convinced me to leave my room for the first time for a party, only for me to see him there and panic, locking myself in the bathroom of some Coral Gables group house.

His IM to me lives as a permanent screenshot in my brain: "I'm sorry if I was a little insistent the other night."

I don't remember how many of my parents' calls I screened, as they became increasingly dissatisfied with leaving voicemails. But when I finally called my dad back, hiding from the aftermath of a hurricane in the backseat of my friend's Ford Explorer, I very clearly remember breaking down at his "what's wrong?" I will never forget my mom's first words when I answered her call 15 minutes later. "Why did I have to hear this from your father?"

I remember and I don't remember. Trauma has no respect for memory. It picks and chooses, often seemingly randomly, what words, sensations, details stick with you. Sometimes I smell his cologne on a stranger and have to stop walking for a minute or two to keep myself together. When we'd only been dating for a few weeks, I curled up on the basement floor to nervously warn my boyfriend that he could never ever push me up against a wall while we made out, no matter how hot it might seem, because I had a panic attack the last time a guy did that since the first time a guy did that.

Memory isn't only in the mind. As the book my therapist had me read tells us, the body remembers. The trauma lives in that entire reproductive region of my torso, where what I just refer to as Hurting jumps up to stab me from the inside, incapacitating me for seconds or hours at a time. After eight years of this, a pain specialist finally told me my Hurting is from muscle spasms, from holding everything so tight, from my whole body flinching internally. There is no medical explanation that exam after exam and scan after scan could find. The doctors' explanations are that the trauma did this. That he did this. The body remembers.

I don't owe you any of these details. I have come to know that you won't believe me unless I give you all of these details. And even then you probably won't, if we're being honest. Always one disclosed detail away from belief.

It is an unimaginable yet all too often manifested cruelty to disbelieve someone who tells you they were raped simply because they cannot recall every detail in perfect clarity. Maybe Jackie got it wrong that the guy was a member of that fraternity. Maybe I don't remember which week it happened. Maybe your sister doesn't remember if there were 5 assailants or 6. Maybe your friend doesn't remember how she got home.

Every bit of me remembers every bit of what happened to me. Sometimes we just don't remember the details.