Rep. Debbie Dingell's speech about the time her dad held a gun on her gave me chills. 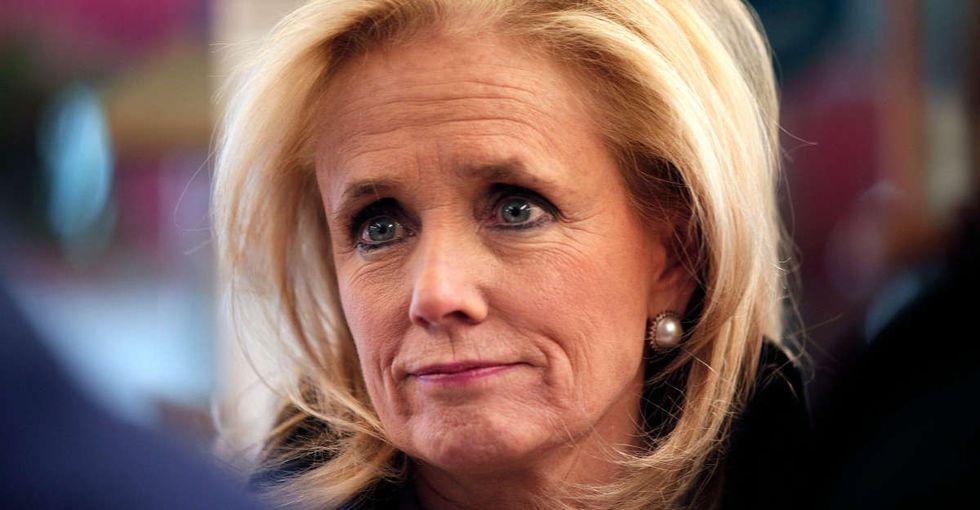 Congressional Democrats are staging an epic sit-in in support of a bill to deny guns to people on the no-fly and terror watch lists.

Democrats have been holding the floor for almost 24 hours while their Republican colleagues gaveled the House into recess late into the night.

The protest has already produced some incredible moments.

Including Lewis' epic speech, recalling his days as a civil rights' leader, a congresswoman hiding her phone in her prosthetic leg so it wouldn't be confiscated, and an anonymous California resident having pizzas delivered to the exhausted, hungry lawmakers.

But the most chilling moment from the overnight sit-in so far might have been Rep. Debbie Dingell's jaw-dropping personal story of a time when she was almost a victim of gun violence at the hands of an abusive father.

The video was taken on Periscope by Rep. Eric Swalwell of California after Republicans banned cameras from the chamber.

"I lived in a house with a man that should not have had access to a gun," the Michigan congresswoman said to cheers and amens.

"I know what it's like to have a gun pointed at you and wonder if you were going to live."

"And I know what it's like to hide in a closet and pray to God to not let anything happen to me."

"And we have never — we don't talk about it. We don't want to say that it happens in all kind of households."

"And we still live in a society where we will let a convicted felon who was stalking somebody of domestic abuse still own a gun."

Dingell is far from alone — and she is one of the lucky ones.

While more men are likely to be murdered, women are far more likely to be killed by a partner or family member. A Johns Hopkins Bloomberg School of Public Health review found that 40% of female homicide victims were murdered by intimate partner, and over half (55%) of them were killed with a gun.

The researchers concluded that having gun in the home increases the risk a homicide will occur by 300%.

The bill the Democrats are holding out for with the sit-in isn't perfect. Far from it.

Critics, including the ACLU, argue that the no-fly list itself is unconstitutional, biased against Muslim Americans, and that passing the "no-fly, no-gun" law would serve to further legitimize it.

But speeches like Dingell's send a crucial message: America needs to face the stark reality of gun violence and to take action to protect the vulnerable people who are its primary victims.

Actor Michael Jace (center), who was convicted of shooting and killing his wife in 2014. Photo by David McNew/Getty Images.

Sometimes that violence looks like what happened in Sandy Hook and Orlando. Far more of the time, however, it looks like a father with a gun, forcing his daughter into a closet as she prays to God he'll let her live.

As long as violent, abusive, dangerous people can own powerful firearms with little oversight, no one is safe. And if we do nothing, stories like Dingell's will continue to be terribly, tragically common.