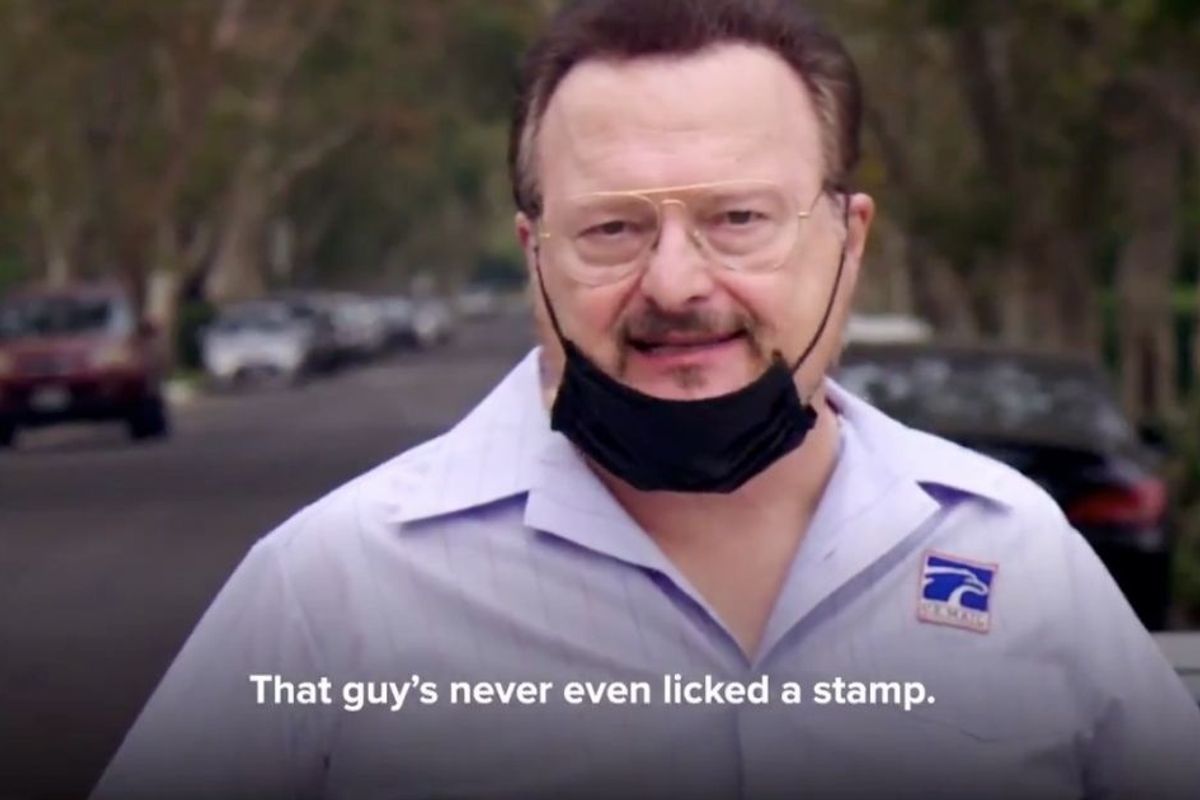 As the election approaches and millions of Americans prepare to send in their ballots by mail, people might be worried about how it's going to go. Between the president's constant drum-beating about fraud with mail-in ballots (which experts still say is not the major concern that he claims it is) and the administration's ongoing attacks on the United States Postal Service, it's an understandable concern.

But never fear—America's favorite mail carrier, Newman, is here. And he has an important message for all of us regarding the postal service and the election, and a message for President Trump regarding his tax returns.

It's silly, of course. And thank goodness, because if we don't have something light to laugh at when it comes to the insanity of our current situation, we'll cry.

The battle over mail-in voting has raged for months, as it became clear early on in the pandemic that voting by mail would be safer than people physically going to the polls. While some states have had universal mail-in voting for many years without issue, other states have had to figure out the best way to orchestrate a larger-than-normal number of people wanting to send in ballots.

I live in Washington, a state that has had universal mail-in voting for a decade. And it's awesome. Our ballots are sent directly to our home address a few weeks before any election. We fill them out at home, sign our name on the included envelope—which will be checked against our signature on our voter registration file upon receipt—and either send them back by mail or drop it in a ballot drop box. The ballot drop box in our town is on a one-way street where you can drive right up to it, just like a mailbox. It's so easy. And since Washington ranks #2 in the nation for electoral integrity according to Harvard University's Electoral Integrity Project, it's clearly safe and secure. Every Washingtonian I know is quite happy with this system.

That doesn't mean there won't be issues in other states—today there was a report of a computer snafu in Ohio that resulted in nearly 50,000 wrong ballots being sent out—but I'm confident that those issues will be worked out in the end. People will use such stories to make outrageous claims about cheating and fraud and rigged elections, but we have to expect that there will be some hiccups in the voting process this year. We are, after all, in the middle of a pandemic. What would be helpful is if we had a president who would instill confidence in our bipartisan electoral boards and commissions to swiftly identify and rectify any issue that arise, rather than sow chaos and confusion and doubt in our country's ability to run a fair election.

It's not as if there have not been computer glitches or human errors in every single election that's ever been held in this country. There is also occasional incidents of fraud or cheating, but every study done on that topic has come to the same conclusion—voter fraud is extremely rare. (Voter suppression is not, however—a whole other story for a whole other article.)

Thanks, Newman, for the comic relief as we wind our way through the final weeks before election day.

Go to showuptovote.com for info on how to vote in your area.