Muslim women and allies stood hand in hand to condemn the attack in London. 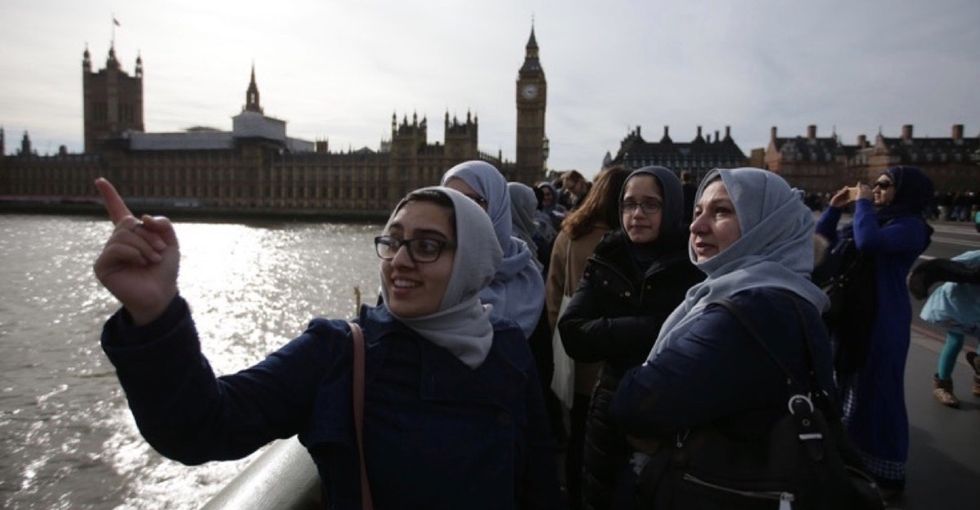 Women stand on London's Westminster Bridge on March 26 to honor the victims of the March 22 attack. Photo by Daniel Leal-Olivas/AFP/Getty Images.

On the same bridge just days prior, Khalid Masood drove his car into pedestrians, injuring dozens and killing four people before being killed by police.

But for five minutes on March 26, 2017, the iconic London span was mostly silent. No chants. No bullhorns. No signs or banners. Simply women and girls joining forces, the sounds of a city in mourning, and people doing their best to carry on in the wake of tragedy.

The event was organized by Women's March on London after one Muslim woman was unfairly maligned for looking indifferent to victims in the aftermath of the attack.

A photo of the woman on the phone walking past an injured victim circulated online. But her detractors only saw a single frame in what was assuredly a shocking and distressing morning.

The woman, who has chosen to remain anonymous, released a statement to TellMAMA, a organization that supports victims of anti-Muslim violence in the U.K.

"What the image does not show is that I had talked to other witnesses to try and find out what was happening, to see if I could be of any help, even though enough people were at the scene tending to the victims. I then decided to call my family to say that I was fine and was making my way home from work, assisting a lady along the way by helping her get to Waterloo station."

For the Muslim women who took part in the public show of solidarity, the event was overwhelmingly emotional.

This was an attack in their figurative backyard, perpetrated by an extremist whose actions don't reflect the religion he claims to represent. Sarah Waseem described the powerful experience in a recent blog post.

"As I stood on the bridge, and the minutes moved on, a sense of calm come over me. Suddenly it did not matter anymore what people might be thinking. I was proud to be there – to show passers-by that, I as a Muslim cared about what had happened in my city, and that I condemned it. I hoped that with my companions, we had in some small measure, showed that terrorism could not divide us from them, that we were at one with them and that perhaps we could reassure them that Islam was not the enemy."

Muslim women and girls often bear the brunt of anti-Muslim rhetoric and violence.

In the wake of terror attacks, women wearing hijabs are often targets for harassment, threats, and violence. It's especially maddening (given the number or terror attacks in majority-Muslim countries) because many victims of terror are Muslim themselves. But it doesn't stop some people from demonizing and being fearful of those who practice Islam.

Just last week, a Muslim woman was followed while driving, blocked from parking her car, and received threats of assault. Another Muslim woman in Charlotte was feeding her infant when a man pointed a gun at her. Attacks like this against individuals and mosques are unacceptable and sadly may be on the rise after the election. This is unacceptable.

But no matter your faith or background, there are lots of ways to help and show your support.

Donate to the Council on American Islamic Relations. Reach out to a mosque in your community to let them know you will not stand for bigotry or anti-Muslim rhetoric. If they host any public events, make a point to attend with your friends or family. Protest, demonstrate, and call your representatives to let them know what you think about pending travel bans or immigration orders. Follow Muslim thinkers, writers, artists, and scholars on Twitter or Facebook. Listen and pass the mic to Muslim voices.

Because in London and at home, #WeStandTogether.

Flowers are left on Westminster Bridge in memory of those who died in the terror attack. Photo by Dan Kitwood/Getty Images.