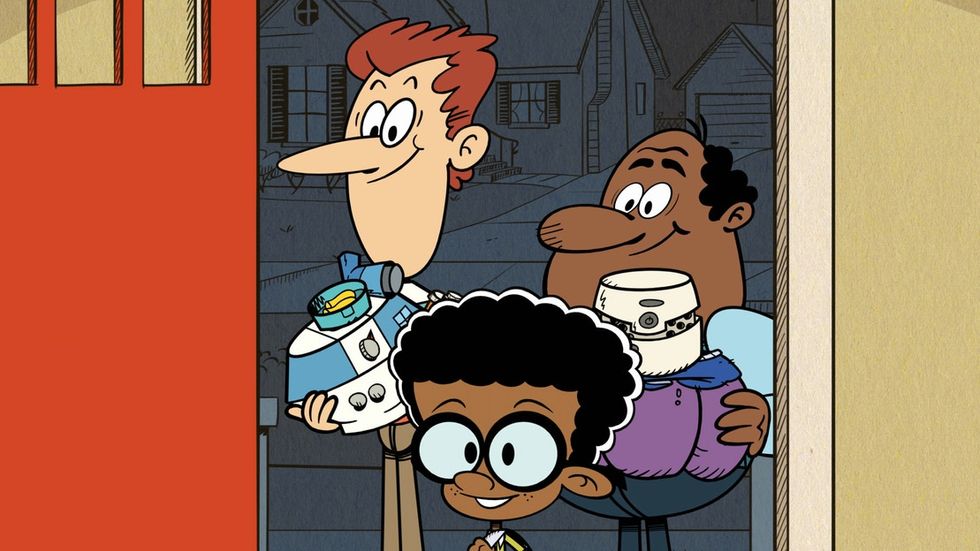 If you haven't watched Nickelodeon cartoons in a while, here's a spectacular reason to jump back on the bright orange wagon:

The cartoon series "The Loud House" is about to become the first Nickelodeon cartoon to debut a same-sex couple.

Let's get an animated cheer for progress!

The cartoon features a family named The Louds (appropriate based on the title and above GIF), specifically their son Lincoln — the only boy in a family of 10 girls. So many different girl characters in one cartoon? Well, that's fantastic, for starters.

However, the episode entitled "Overnight Success", which is set to air Wednesday, July 20, could rocket the series to legendary status.

That's right, kids — those are two openly gay, interracial parents dropping their son off at a sleepover. But the best part isn't the fact that they're gay — it's how little attention the show draws to that fact. Well, except for the less-than-subtle announcement "Time to make history!" But can you really blame them for that? It is, after all, a huge moment for the network, and a little attention should be paid.

This is another major step forward in the history of gay characters stepping into the spotlight on television.

LGBTQ characters could be spotted on a number of animated programs, one example dating as far back as 1990, when a guest character named Karl (voiced by Harvey Fierstein) shares a kiss with Homer in an episode entitled "Simpson and Delilah." The episode racked up over 29.6 million viewers and is often touted as one of the best "Simpsons" episodes of all time.

Homer and Karl. Photo by The Simpsons/YouTube.

"The Simpsons" played a pivotal role in bringing gay characters into the foreground, as did "Family Guy" and "South Park," but "The Loud House's" move to show a regular same-sex couple may make even more of a difference.

It's one of the first shows aimed at young children to do so, and as such, it's teaching kids just how normal it is to have gay parents. These characters are no different than heterosexual parents: overprotective and overly emotional at milestones like sleepovers. But the more those messages can be shown on television, the better.

Case in point, these appreciative fans:

Let's hope other kid-friendly cartoons soon follow in "The Loud House's" footsteps. While this particular TV family is neurotic and even a little crazy, it's great to have one more example of families — of all shapes and sizes — to remind us that love is love.