Kids don't usually learn about the birds and bees in kindergarten. Unless, of course, they're Dutch.

The Netherlands' comprehensive sexuality education program starts in kindergarten. But what are those kids actually learning? 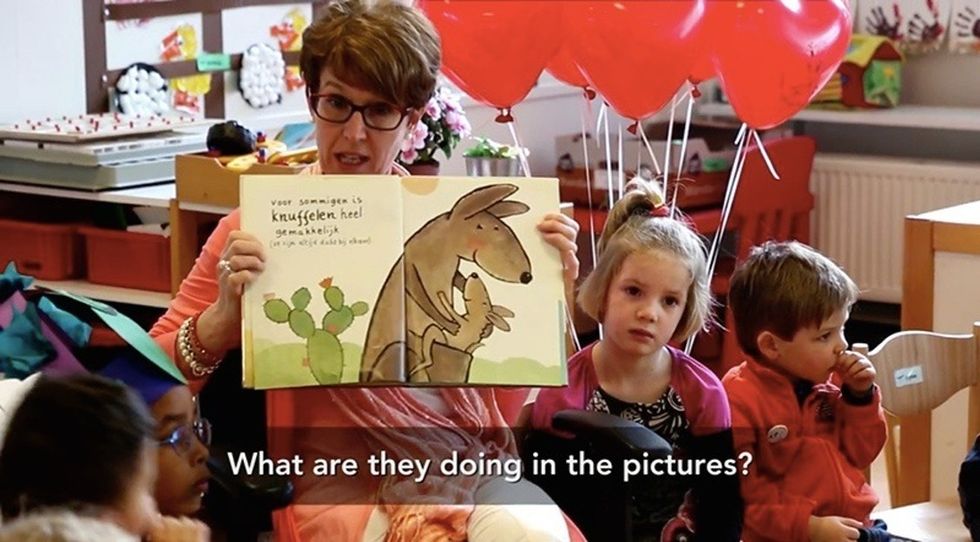 WHAT ARE THESE CHILDREN WORKING ON, SEX WORKSHEETS?!?! (JK, probably not.) Image via Thinkstock.

Welcome to sex ed in the Netherlands. It starts when kids are 4.

As part of the program, schools feature a week of classes in the spring focused on everything from love and healthy relationships (for the little kiddos) to safe sex and birth control (for the teens). The week is called “lentekriebels," which translates to “spring fever."

So wait, are 4-year-olds learning about sex in school?

Not exactly. But they are having open conversations that will make it easier to learn about those topics at a later age.

In one classroom, PBS filmed a clip of kindergarteners discussing hugging. “When do you hug someone?" asked the teacher. One student responded, “If you love someone."

Young kids talk about what people do when they love each other. Image via PBS NewsHour.

In later years, the students do learn specifically about sex: how to have sex, how to choose contraception, how to deal with resistance to using a condom, all sorts of things you'd typically think of being covered under "sex ed."

Even for older teens, sex itself isn't the only focus. Students also learn things like ... how to find (and enforce) their own boundaries.

But even for older teens, sex itself isn't the only focus. Students also learn things like how to communicate with their partner, how to find (and enforce) their own boundaries, and even how to use the Internet safely.

A class of 11-year-olds talks about what it's like to be in love. Image via PBS NewsHour.

OK, so spill the stats.

Does the comprehensive sexuality education program actually work? That depends, of course, on what you're measuring by.

Research shows that teenagers in the U.S. in the Netherlands first have sex at around the same age — about 17 for American teens, about 18 for Dutch teens.

"66% of sexually active American teens surveyed said they wished that they had waited longer to have sex for the first time."

The statistic I found really striking, though, has to do with how teens felt about their "first time." PBS NewsHour reports that in the Netherlands, most 12- to 25-year-olds "say they had 'wanted and fun' first sexual experiences. By comparison, 66% of sexually active American teens surveyed said they wished that they had waited longer to have sex for the first time."

Plenty of American movies show someone's first time as being after prom and ... not great. Image via Thinkstock.

The Netherlands is known for having an incredibly open culture when it comes to discussing sex. No, I'm not saying that all parents in the Netherlands are telling their teens to have sex all the time, but the topic of conversation is far less taboo than we're used to in the U.S.

Open conversations, less shame when talking about sexuality, and ultimately more information overall? A culture like that means teens can actually gather the information to make smart choices that are right for them.

Want to see it all in action? Check out this clip from PBS of a classroom full of 11-year-olds talking about what it's like to be in love. My favorite line here is when a young girl responds to the question, "What is really being in love?" with the wise words, "You find someone nicer than just regular nice." So true, my friend. So true.