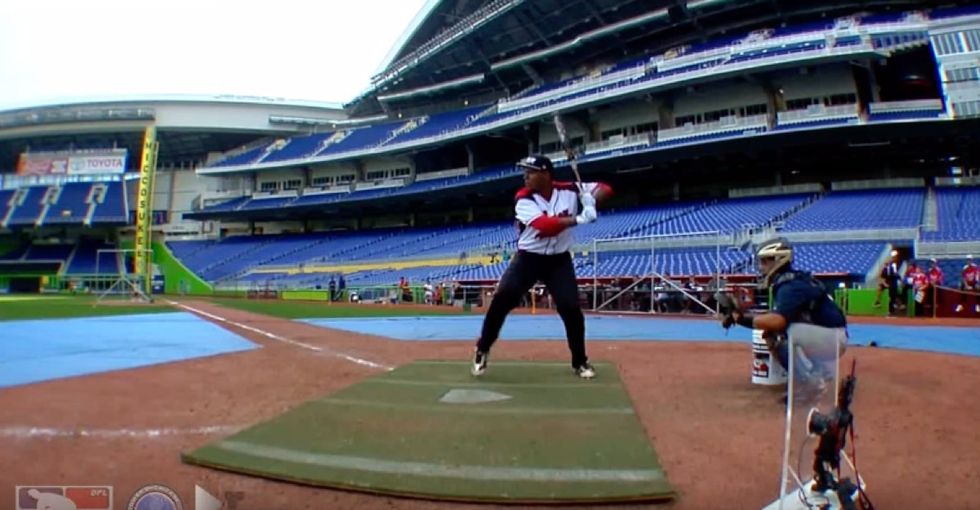 According to Tom Haudricourt in an article for the Milwaukee Journal Sentinel, Denson's path to the history books began about a month ago when one of his teammates made a homophobic joke directed his way. That's when Denson took a leap of faith and shared something with his teammates: He's gay.

He can also hit a 515-foot home run, so there's that. GIF from dplbaseball.

To his surprise and relief, his teammates — members of the Milwaukee Brewers' minor-league affiliate in Helena, Montana — accepted him with open arms, telling him, "You're still our teammate. You're still our brother."

As it turns out, there's never been an active, openly gay player affiliated with an MLB team before. Denson is the first.

Denson isn't the first gay man to play baseball — players like Glenn Burke and Billy Bean came out after their playing careers came to a close, and it's almost a certainty that of the 1,200 players currently on MLB 40-man rosters, there are a handful of closeted players — but he is the first to "go public" with that news, if you will.

In professional sports — and in men's sports, in particular — coming out as gay can make for a challenging career.

As much of the world has gotten to the point of at very least being able to accept gay individuals in the world around them, there's still a massive stigma when it comes to athletes.

Take, for example, Michael Sam, who made history in 2014 as the first out gay football player to be drafted by an NFL team.

After being drafted in the seventh round by the St. Louis Rams, Sam had an impressive pre-season before ultimately getting cut by the team.

Unable to land a roster spot on another NFL team, Sam planned to play this season for the Montreal Alouettes of the Canadian Football League as he continued to pursue his dream of playing pro football.

Last week, after playing just one game with the Alouettes, Sam announced via Twitter that he was walking away from the game of football.

"The last 12 months have been very difficult for me, to the point where I became concerned with my mental health. Because of this, I am going to step away from the game at this time. I thank the Alouettes for this opportunity, and hope to be back on the field soon. Thank you all for your understanding and support." — Michael Sam

Earlier this year, a report came out suggesting that the U.S. lags far behind other countries when it comes to accepting gay athletes.

A survey of six English-speaking countries — the U.S., Canada, Australia, New Zealand, the United Kingdom, and Ireland — found U.S. athletes perceived more homophobia from fans and teammates than any of the other countries. 54% of U.S. athletes surveyed reported that lesbian, gay, and bisexual athletes were accepted "only slightly or not at all."

So, why is it such a big deal that Denson came out? Because he had every reason not to.

He's 20 years old. He has everything to lose.

When former pro basketball player Jason Collins came out as gay in 2013, he was 33 years old, on the tail end of his playing career, and had earned more than $34 million. Had coming out ended his career, he had all that to fall back on.

Denson doesn't have that. He is ranked as the 27th best player in the Brewers' minor league system. There's a real chance that he may never reach the big leagues.

He has the support of his teammates and the Brewers organization; that's crucial.

He opened up about who he is even though he's certainly well aware of the possible outcome. That's courage.