How an Army captain healed by falling in love with the beauty of the Middle East. 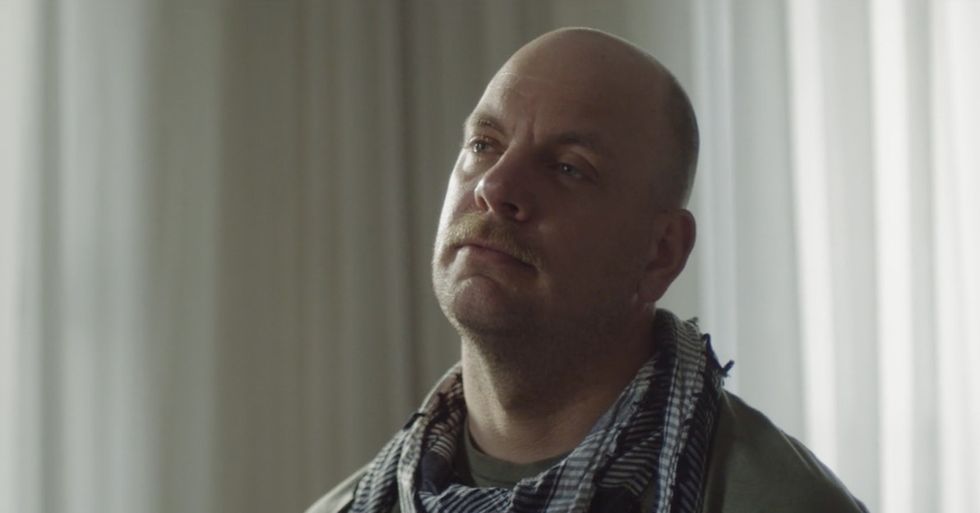 Army Capt. Stacy Bare was afraid of becoming a statistic.

Back from Iraq, the word "veteran" worried him. It spoke to addiction. Joblessness. Hopelessness.

He was determined not to end up hooked on drugs or alcohol like so many others. But the heavy toll of war was real, and grit wasn't enough to get him through the tough transition of coming home and adjusting to civilian life.

He soon found his fears coming to fruition.

"That's when 'eight ball and wall' became a thing. I would snort the eight ball of cocaine then try and run through a wall," he says in a new documentary, "Adventure Not War." "That was a fun party trick for me."

Bare became suicidal. But a phone call from a former military friend changed everything.

"He asked me to put off killing myself for a week or two and come climb with him," he says.

Bare reluctantly agreed. And after his first time, it ignited a passion within him. It gave him a reason to live.

GIF via "Adventure Not War."

Soon, Bare decided to return to Iraq so he could replace his memories there with something new — and to make some attempt at repairing the massive destruction he and his fellow soldiers had played a role in.

"I feel like I had a responsibility to go back and explore the places and people that maybe I had heard about or seen glimpses of," he says.

Along with two fellow veterans — Robin Brown and Matthew Griffin — and a film crew to document the journey, Bare set out to climb and ski the mountains of Iraq. Before hitting the slopes, though, the crew spent time in refugee camps, helping to give aid to children displaced by the war.

But it wasn't just the fresh mountain air that helped him heal. It was discovering a different side of the place that had haunted him, being welcomed and embraced by the people there, and finding a way to replace hatred with beauty.

This pilgrimage certainly doesn't erase what happened during the war in Iraq. But it shows that individual people can seek to not see a place as an enemy but something to be understood and appreciated.

You can watch Bare's amazing journey in the full short film below:

We thought things were bad in 2016, but, according to the Pew Research Center, things have only gotten worse. According to Pew's 2019 study, both Democrats and Republicans see the other side as being "more immoral," "more close-minded," and less intelligent. If you go farther back, the number of Americans who view the other side as a threat to "the nation's well-being" has doubled since 1994. Even when it comes to non-political values and goals, people in both parties believe the other side doesn't share their same values.

You probably already knew that the USA is becoming increasingly more divided. You've probably even voiced that concern to friends, especially if you find yourself reading this article. In fact, that same Pew study found that majorities in both parties are concerned over the growing polarization happening in America. But, what can we do about it?