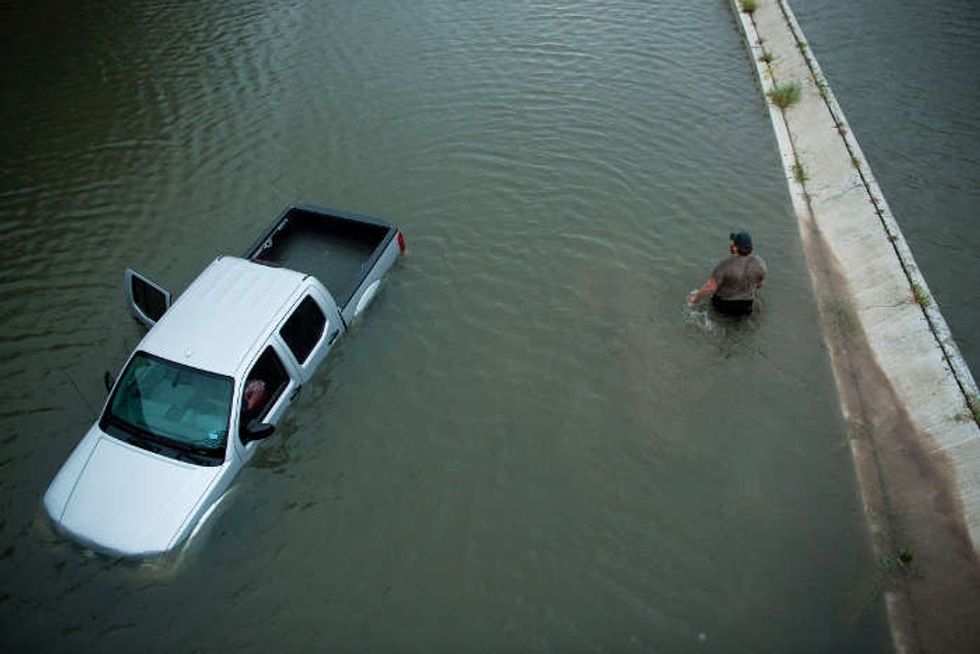 A truck driver estimates the depth of the water surrounding him near an abandoned truck. Photo by Brendan Smialowski/Getty Images.

With President Donald Trump's immigration crackdown looming and Hurricane Harvey's devastating effects still unaccounted for, many undocumented Houstonians were left to wonder if it was safe to leave their homes and seek help during the storm.

But Houston Mayor Sylvester Turner, who is also a lawyer, is standing up for his city's undocumented residents.

At a press conference on Aug. 28, 2017, he offered an unambiguous show of support.

"If you need help and someone comes and they require help, and then for some reason, then somebody tries to deport them, I will represent them myself, OK?" Turner said.

The mayor, who is a member of the State Bar of Texas, stood by his controversial decision not to issue an evacuation order for the city. He urged residents to seek help regardless of their immigration status. "I and others will be the first ones to stand up with you," he said.

An estimated 575,000 undocumented immigrants live in the Houston metropolitan area.

During 2008's Hurricane Ike, the last major hurricane to hit Texas, federal officials de-emphasized immigration enforcement in their communication to the public.

"We're not going to be bogging people down with checks or doing things to delay the rapid movement of people out of the zone of danger," Michael Chertoff, Homeland Security secretary at the time, said.

In sharp contrast, the Texas Tribune reported on Aug. 24 that U.S. Customs and Border Patrol (CBP) checkpoints would remain open during Harvey, prompting fears that undocumented residents of the city could be apprehended while trying to evacuate.

The following day, the agency clarified that the checkpoints would "close as state highways close" but that those outside the hurricane's range would remain open during the storm. In a joint statement, CBP and Immigration and Customs Enforcement (ICE) announced they would be suspending enforcement operations at evacuation sites, shelters, and food banks.

As rumors swirl about immigration enforcement, at least Houston's city government is working to calm anxious residents enough to request the services they need.

"We want you to call," Turner said in the press conference. "There is absolutely no reason why anyone should not call."

A mayor shouldn't have to stand up and offer legal services just so his city's residents can get help in a life-threatening crisis. But it's good to see he's willing to do whatever it takes to bring people to safety.