He thought his T-shirt would turn a few heads, but he wasn't expecting so much backlash. 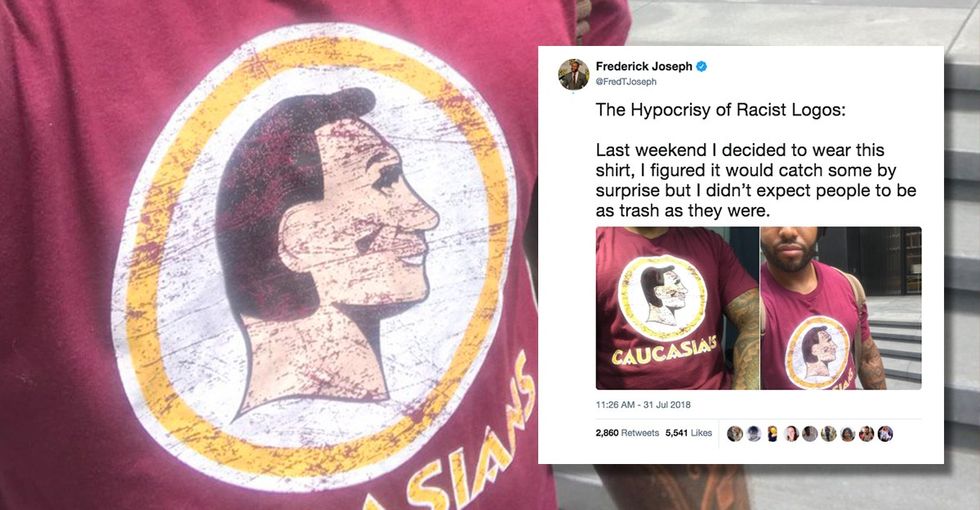 The Washington Redskins are one of the most controversial teams in professional sports, and it has nothing to do with what's happening on the field.

For one, unless it's meant to describe a type of potato (which, while that would be delicious, it is not the case), the team's name is a racist slur, and not one that many Indigenous people are super excited about. The logo, meant to be some sort of chief with — you guessed it — red skin, compounds the problem. When you add in the fact that many of the team's fans like to dress up as that logo, it creates kind of a perfect storm of racism.

Arguments over whether the team should keep the name have gone on for years. Those in favor of keeping it often cite tradition (the team was established in 1932), while those who'd like to see it changed often cite the, you know, racism. But this is not an article about that. Not exactly, at least.

Frederick Joseph decided to conduct a bit of a social experiment. The results were fascinating.

Joseph, a marketing professional and CEO of We Have Stories, wore a shirt modeled off the Washington team's logo with a few small tweaks: The shirt read "Caucasians" rather than the usual slur, with a white bust in place of the team's current mascot.

The Hypocrisy of Racist Logos: Last weekend I decided to wear this shirt, I figured it would catch some by surpri… https://t.co/JEXajuWHPG
— Frederick Joseph (@Frederick Joseph)1533054385.0

Here's what happened next, in Joseph's words:

"The shirt is a play on the Washington 'Redskins' logo to demonstrate how people look wearing apparel with a logo that is blatantly racially charged and disrespectful. The shirt doesn't have any rude language or slurs such as 'crackers' or 'honkies' ...  but that didn't matter. I left [SiriusXM Progress] after just doing an interview with [radio host Xorje Olivares], and it was my first time in public with the shirt on. A white guy walking by mistook the shirt for an actual team shirt and yelled 'Go Skins!' I said 'nah,' he then saw my shirt and yelled 'asshole!'

"Next, an older white lady stopped me in the street and said 'why would you wear that? It's disrespectful!' So I asked her if she would have said the same if I had on the actually team shirt or another team using disrespectful branding. She said 'no, because that’s the logo!'"

"As I walked through Manhattan, people looked at me and rolled their eyes, pointed, made snide comments, etc. But, I've never seen white people do the same when people are wearing 'Redskins' apparel, which is actually racist versus the word 'caucasians' and a white man logo. Basically, I was being shamed as a black person for wearing a non-disrespectful shirt with a white person logo on it.

"But people wear apparel and jerseys with logos depicting things such as a Native American and call them 'redskins' ... whew chile, the hypocrisy and privilege. I was fairly surprised by the reactions of people because again, there are so many disrespectful and racist representations of minorities used for brands and they don't even think twice. But, it goes to show how fickle and hypocritical people can be.

"I'd be interested to see more people wear shirts and apparel such as this to make the point and see how the people who have racist car decals, shirts, jerseys, etc. respond when the tables are turned (and still not really)."


Each of the people Joseph talked about in his story were so close to getting it. So, so close!

Many acknowledged that seeing yourself represented in mascot form could be offensive and inappropriate — at least when they were the ones being depicted. Joseph's situation resembles what happened in 2016 when Bomani Jones wore a shirt on ESPN reading "Caucasians" that also riffed on the Cleveland Indians logo and uniform.

One person, clearly missing what Jones was going for, asked him to consider how he'd feel if someone wore a shirt reading "African Americans," to which Jones responded, "Or ... Indians."

In both Jones' and Joseph's cases, the goal was to help build empathy by sharing a bit of perspective with people who hadn't considered how it feels to be on the other side.

Too often, people fail to consider how something might affect others if it doesn't also affect us personally.

Maybe the Washington team's name and logo doesn't seem that bad to non-Indigenous people. That's not really our call to make though, is it?

And while some things may seem petty or centered around "hurt feelings," it's not always so obvious how serious it is to the people being affected. Whether we're talking about race, age, gender, political affiliation, geographical location, religion, or any other axis of identity, we could probably all benefit from a deep breath and a refresh on our outlook.

With his "Caucasians" shirt, Joseph did just that.