He spent 9 years behind bars for a crime he didn't commit. Now he's taking on the justice system.

He's not the first person to be wrongfully convicted of a crime; he wants to be the last. 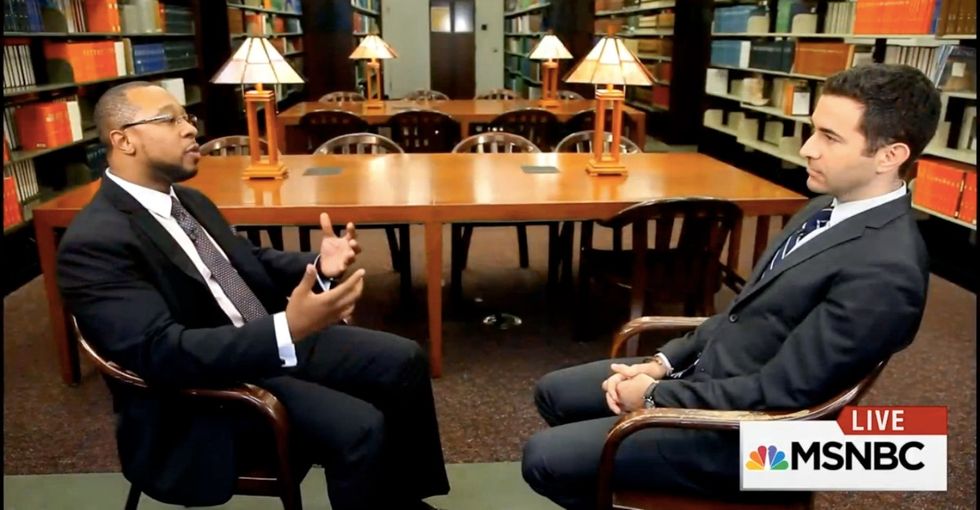 At just 17 years old, Jarrett Adams found himself convicted of a heinous crime he insists he did not commit.

For the better part of a decade, Adams has fought for his freedom.

A new story reported by MSNBC's Ari Melber takes a look at his incredible journey, which started all the way back in 1998 and ended (or started again, depending on how you look at it) with Adams graduating from law school after spending nine years in prison.

On the evening of Sept. 5, 1998, Adams and two friends visited the University of Wisconsin Whitewater.

The teens traveled from Chicago to the campus, located a little more than two hours northwest of the city by car. Adams and his friends were accused of gang-raping a female student in her dorm room. The three were eventually arrested and charged with five counts of second-degree sexual assault.

While one of the other men accused would hire his own lawyer, Adams and the third man relied on public defenders.

The public defender assigned to Adams' case opted against calling any defense witnesses.

One of the other accused teens was able to hire an attorney who called in an alibi witness. He, unlike Adams and the third defendant, escaped conviction after the accuser's story was brought into question.

In February 2000, an all-white jury found Adams guilty. He was sentenced to 28 years in prison.

For nearly a decade, Adams called this prison home.

Behind bars, Adams spent time in the prison library, learning about the appeals process.

The more he learned about case law, the more he realized that the system was effectively rigged against those who can't afford legal representation.

“There were a lot of young black people in there as a result of bad representation, not knowing anything about the law, pleading guilty to cases where they shouldn't have plead guilty," he tells Melber. “I'm driven now, because not only do I want to prove my innocence, but I also want to advocate on behalf of those who I know were just like me."

Hard work, a unique perspective, and a lot of studying helped Adams secure his freedom.

Stories about overworked, underpaid public defenders like the one who worked Adams' case pop up all the time.

Earlier this year, the American Civil Liberties Union filed a lawsuit in hopes of addressing exactly these types of issues. Their focus was on Fresno County and the State of California, two entities with especially strained public defender resources.

"Lawsuits like [the ACLU's]," lawyer and legal defense advocate Jonathan Rapping told Mother Jones earlier this year, "are really bringing to the public consciousness the fact that there are two very different systems of justice — One for people with money and one for people without money. I think that at our core as Americans we recognize that that just isn't right."

You may have even seen "Last Week with John Oliver" cover this very topic earlier this year with actors from various cop shows giving dramatic, and more accurate, recitations of a prisoner's Miranda Rights.

After years in prison spent researching the law, Adams won his appeal and had his conviction overturned.

On June 20, 2006, the Seventh Circuit Court of Appeals vacated Adams' sentence on grounds that he didn't receive proper representation from his public defender. On Jan. 28, 2007, Adams was released from prison with just $30 to his name.

Adams' story was just getting started.

He enrolled at Chicago's Loyola Law School. And in May 2015, he graduated.

This summer, Adams took the bar exam. Come November, he'll find out if he passed. In the meantime, he's working as a law clerk at the Seventh Circuit Court of Appeals, the very same court that overturned his conviction.

Adams smiles after his May 2015 graduation ceremony.

He wants to help reform the criminal justice system and is clerking for the same court that overturned his conviction.

Once his clerkship comes to an end, Adams plans to put his energy into advocating for the poor and reforming justice policy. In the meantime, he heads up a wrongful conviction clinic at Loyola.

"You have a problem in the criminal justice system where unfortunately it's better to be rich and guilty than it is to be innocent and poor," he tells Melber.

If anyone's determined enough to bring a change to a broken system, that man is Adams.

You can read Ari Melber's full report at MSNBC.com, and you can watch the video below.