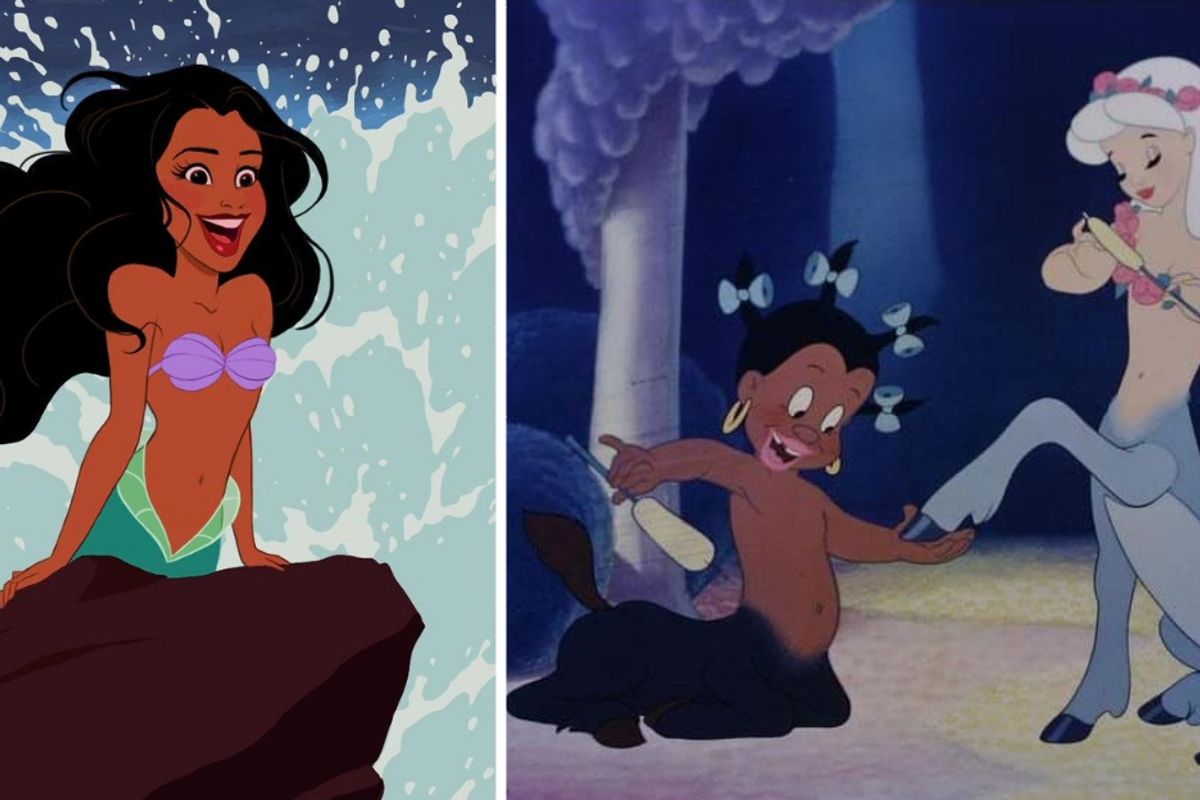 It's a predictable scene at this point: Disney makes a character of color. People who value diversity and representation celebrate, while racists freak out about "pandering" and sad little dudes living in their parents' basement toss around the term "social justice warriors" like it's an insult.

Dylan Bonner on Instagram: “Well this piece from 2015 certainly made the rounds today! Lol it was drawn for a family friend so when I made it I obviously had no idea…”

But even those of us who celebrate greater representation in children's films may not recognize that Disney creating a black Little Mermaid goes beyond adding more diversity to the princess world.

It's the way black girls were actually were represented in Disney productions—the blatantly racist imagery and messages that audiences consumed for decades—that makes people's arguments against a black mermaid even more ridiculous and adds greater significance to black female protagonists.

In a viral Facebook post, Angelica Sampson explained why merely pointing out that representation is important doesn't paint the full picture, and in fact sanitizes the reality of what black girls have been subjected to in Disney's history.

"Not only did black girls like my mother have to use their imaginations to insert themselves into positive Disney movie narratives," Sampson wrote, "they had to consciously resist being influenced by images like this still from the original Fantasia (1940).

She was small and aside from her brown skin tone, is drawn without fantastical pastel coloring the other female centaurs possessed.

She was a naked child with the lower body of a mule made to serve grown women."

"I want to you to fully absorb that she is intentionally drawn without clothing to designate her low social status," Sampson added.

"In an animated fantasy movie for small children, black girls were represented by a pickaninny named Sunflower. She brushes white women's hair and files their nails."

And that wasn't the only example of racist representation of black females in Disney films.

"Black girls sat through the chimney sweep scene from Mary Poppins (1964), where the admiral made a joke that they were being attacked by 'Hottentots,'" Sampson continued.

'Hottentot' is a racial slur used to describe the Khoisan people of South Africa. In the 19th century, Europeans were so fascinated by the high large buttocks and labia of black women from this region that they were routinely kidnapped and paraded around the world to be exhibited at circuses or private fancy parties where the wealthy could even pay for the privilege of touching them.
The most famous of these African women was a girl name Saartjie or Sara Baartman.

She was advertised under the name 'Hottentot Venus' and after her popularity waned, was forced into prostitution.

She died of pneumonia or syphilis at the age of 24.

After her death her body was dissected and her labia and brain were preserved and put on display at a museum in France. This was done in the name of 'racial science.'

I learned about her when I was 9, because I asked my mommy what a Hottentot was and she told me the truth.

So when you see posts that say black girls have NEVER been acknowledged by Disney, please understand it's not true.

Even in fairytales, white people still imagine black women and girls as beasts of burden.
Even in fantasy, we are degraded.

Even Princess Tiana was the child of a domestic servant. Her happily ever after was securing a loan. 🙃

So excuse us for being excited to see a black child portrayed as a WHIMSICAL MERMAID with GORGEOUS FINS and an ANGELIC voice, and freedom to collect trinkets and sing and have silly boy problems!!"

Sampson also explained the additional significance of having a black mermaid due to the societal assumption that black people don't swim. She pointed out that this is only the case because black people were systematically denied the opportunity to learn to swim for centuries. It started in the slavery era, since a slave who could swim would find it easier to escape. After emancipation, black people were segregated from public pools and housing discrimination prevented them from living in homes or communities with pools—and such segregation was violently enforced by some white people. Even white-centered beauty standards that prompted black women to chemically straighten their hair affected black women learning to swim. Generations of parents were unable to teach their children to swim because they never learned themselves due to racism in America.

"And yet in some circles, even today," Sampson points out, "the tragedy of black Americans avoiding the water is considered hilarious and an indicator of our own inadequacy. And yes, even today, you can read stories about entire black families dying because one child began to drown and one by one, the older children jumped in to save them, resulting in the deaths of a dozen people.

So yes, I'm excited that little black kids are gonna see black Ariel and wanna go swimming. I'm glad a company as influential as Disney is gonna take part in replacing the negative imagery black children have absorbed for the entire history of the US.

Yes, let's do that. And while we're at it, let's tell insecure white people to stop throwing hissy fits every time Disney does something that disrupts the status quo.

There's a whole lot of historical damage to attempt to undo, and If a black fictional mermaid threatens your existence in any way, shape, or form, you are part of the problem. Take a seat and learn from those who are actually impacted by this character's existence, because their voices are the ones that truly matter here.