These stunning mermaid photos may change how you look at plastic. 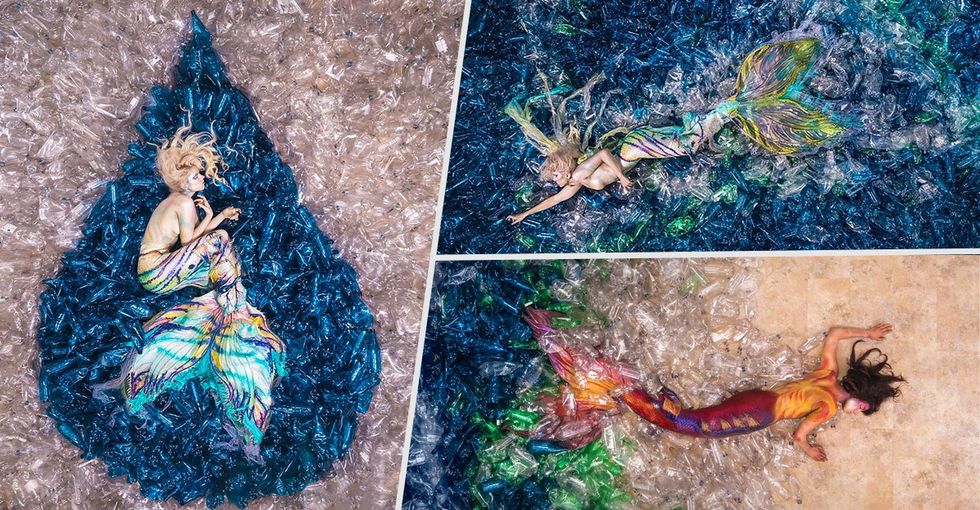 Photographer Benjamin Von Wong is determined to make people care about plastic pollution, but he knew he needed to make a big splash to get their attention.

"All I knew was that plastic pollution was a boring topic and I had to find a way to make it more interesting," he explained on his blog.

Inspired by the knowledge that there will be more plastic than fish in the ocean by 2050, Von Wong came up with an ingenious idea: He'd create a sea of plastic.

Things fell into place quickly after that. A waste management center let him borrow 10,000 plastic bottles. A friend let him coordinate the shoot in his warehouse. A "small army" showed up to help clean the bottles.

Photos showing thousands of plastic bottles were interesting, sure, but Von Wong knew the shoot needed "something unique and beautiful to truly stand out."

Thankfully, he didn't have to go far to find one. His mother knew of a local artist named Cynthia Brault of Cyntault Créations who made silicone tails, among other things. Once she heard about the project, she offered to make a custom one for the shoot.

As for the mermaid herself? Thanks to the magic of hair and makeup, model Clara Cloutier transformed into a living, breathing half-fish, half-human friend-of-Ariel.

"Alone, I was just a photographer — but thanks to the help of amazing individuals we transformed a lifeless pile of used garbage into a message: #MermaidsHatePlastic," Von Wong explained.

The photos are stunning, but Von Wong is hoping to do more than produce a few gorgeous images.

He wants to create a sea change in the way people use plastic, which is why he's encouraging people to take a pledge to reduce the amount of plastic they use.

‌If we don't take action, our plastic waste will continue to be found in places it shouldn't — and not just on beaches either. Plastic has turned up "in the stomachs of more than half the world’s sea turtles and nearly all of its marine birds."

The good news is that people are finding simple and innovative ways to reduce the amount of plastic that ends up in the ocean.

But it'll take more than one photographer, 10,000 plastic bottles, and a mermaid to combat plastic pollution.

We're all going to have to change the way we look at the plastic we use. Sharing these photos is a good place to start.