This young inventor's brilliant device could remove tons of garbage from our oceans. 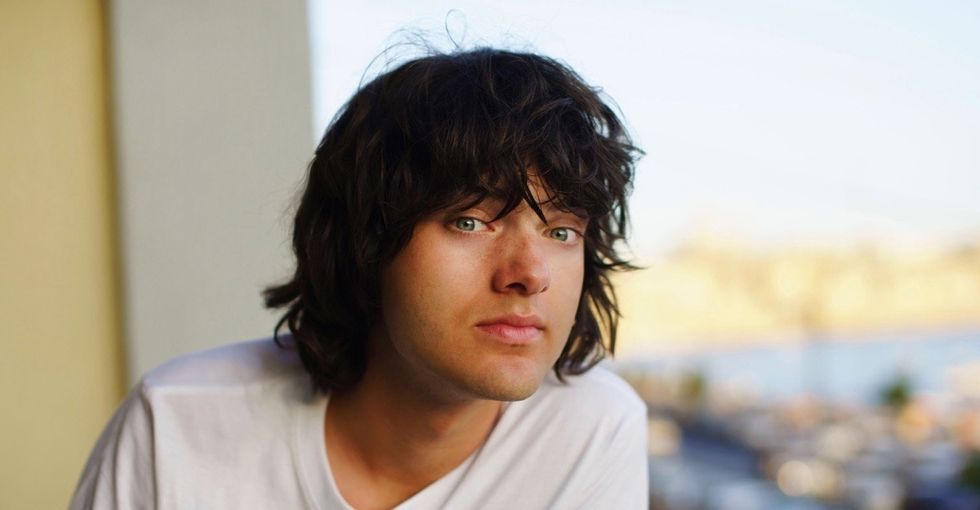 When Boyan Slat was 16 years old, he decided to try to save the ocean.

"I've always been making stuff," Slat said. Now he's 21, a young man with full hair, and he says he's been an inventor since he was young. He built tree houses and ziplines in his native Netherlands as a child. And once, when he was 12, he decided to see what would happen if he launched 250 model rockets at the same time.

"I liked problem-solving, but what I didn't really have was a real problem to work on."

He found that problem while scuba diving in Greece.

"I was expecting to see beautiful stuff underwater, but I saw more plastic bags than fish."

After his dive, Slat did more research, and he learned that plastic is a serious problem. A very serious problem. In fact, the ocean is currently full of an estimated 5.25 trillion pieces of plastic.

A volunteer collects rubbish in Manila Bay in the Philippines. Photo from Jay Director/AFP/Getty Images.

This plastic tends to accumulate in large patches such as the Great Pacific Garbage Patch in the North Pacific and kills birds, fish, and all manner of sea life.

"And I thought, well, why don't we just clean this up?" said Slat.

A lot of people were doubtful the garbage problem could ever be solved, but Slat started to look for solutions anyway.

"Everyone on the internet was saying it was impossible to clean up, and I thought, well, that’s quite a big statement," Slat said.

After a span of time, 16-year-old Slat hit on an idea: Instead of chasing individual patches of trash across the ocean, he figured he could flip the scenario and use the ocean's currents to move the trash to a stationary device instead.

Slat founded his foundation, The Ocean Cleanup, in 2013.

The Ocean Cleanup's main work is developing the system Slat thought up when he was 16. It's a system designed to remove plastic debris from the ocean by placing floating barriers in strategic points along ocean currents, funneling the trash toward central removers.

In order to focus wholly on The Ocean Cleanup, Slat also dropped out of college, where he had been studying aerospace engineering. As for how his family took the news, he said, "I think at first they were a bit anxious about me quitting college, but I am quite glad they gave me that."

The same year, Slat presented his ocean cleanup idea in a TEDx event, where it caught the internet's attention and went viral.

"I wasn't really prepared [for the viral moment]," said Slat. "Suddenly I received about 1,500 emails per day in my personal mailbox."

That first week after the TEDx video went viral, Slat says there were so many emails that he had to invite friends to come over and help him answer the messages from his bedroom. "I was there with like five friends, with our laptops, just plowing our way through all those emails," he remembers.

From there, Slat was able to pull together a team of experts and engineers and find funding for the project.

Today, The Ocean Cleanup is on track to put Slat's device in the ocean soon.

In fact, on June 22, 2016, The Ocean Cleanup launched a prototype device in the North Sea.

"To finally have something physical that you can actually see on the ocean, that you're putting through testing, and see that it works I think that's ... it's really sort of indescribable," Slat said.

"But of course it's just the beginning," added Slat. "It's just one of many tests. But it is an important milestone, that's for sure."

There's been some skepticism about whether the project will work in the end, but Slat seems both pragmatic and determined.

One of the boats that launched the prototype. Photo from The Ocean Cleanup, used with permission.

Some have questioned whether the project will be able to collect enough trash to be feasible or wonder whether sea life will be safe, as The Ocean Cleanup says it will, but Slat seems to take the skepticism in stride.

"I really think the only way to know whether it will work is the things we are doing right now — by testing, testing, testing again," Slat said. He says a little skepticism is always expected around new technology, plus it can often end up helping researchers and engineers focus on the right questions to answer.

"I think working with the right people, having the right pragmatic attitude and iterative design philosophy ... if there is a way that we can do it, we will find it."

If the North Sea prototype does well, The Ocean Cleanup will move forward on their plans to deploy a full-size system.

If everything goes according to plan, they'll be able to launch a pilot system late next year, and they may be able to start cleaning up the North Pacific by 2020.

"I'm quite optimistic about the future," Slat said. "We've shown that for many problems we've faced over the last few centuries, we've been able to make dramatic advancements in them. Think about violence, education, poverty, etc."

Of course, we have a lot of work to do to solve current environmental problems. But technology has proven itself to be incredibly powerful, and by focusing on using it for good, we can conquer this problem too.

"As long as we develop technologies that actually help solve problems, I think eventually we will get to a pretty bright future," he said.