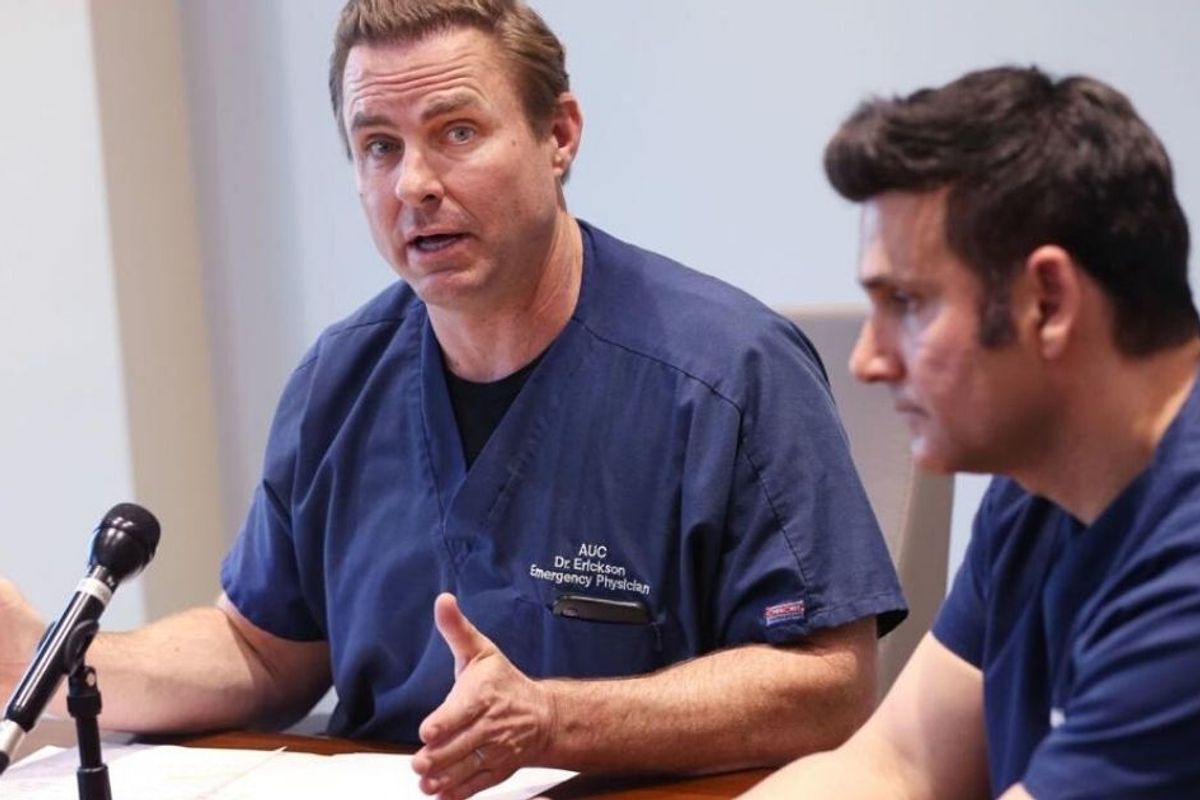 Two doctors who run an urgent care clinic in Bakersfield, California have made a viral sensation of themselves by going against the recommendations of experts in epidemiology and advocating for the immediate reopening of the country.

In a video that's been shared widely across social media, Drs. Dan Erickson and Artin Massihi claim that, based on their testing numbers at their five clinics in Bakersfield, COVID-19 has a comparable infection and death rate as the seasonal flu. Therefore, they say, lockdowns aren't warranted and should end immediately.

One look at New York or New Jersey's hospitals in recent weeks, or a cursory peek at the stats showing that COVID-19 has killed more Americans than the average flu season just this month alone (54,000 deaths in April so far—flu kills an estimated 12,000 to 61,000 in the U.S. annually), really ought to be enough for people to view these "no worse than the flu" claims with skepticism. But Americans who are struggling with being unable to work or are just tired of staying home have glommed onto these doctors' claims as gospel truth and used them as proof that the response to the pandemic has been overblown.

This seems like a good time to remind people that a dissenting voice should not automatically be convincing just because it says what you want to hear. Not when that voice is weighed against thousands upon thousands of other professional voices—including the vast majority of infectious disease experts who have made this their life's work—who say something different. Not when statisticians and epidemiologists point out the flaws in these doctors' methodology and erroneous conclusions. And not when the professional organizations in these doctors' own field call them out for misinformation.

The American College of Emergency Physicians (ACEP) and the American Academy of Emergency Medicine (AAEM) jointly and emphatically condemn the recent opinions released by Dr. Daniel Erickson and Dr. Artin Massihi. These reckless and untested musings do not speak for medical societies and are inconsistent with current science and epidemiology regarding COVID-19. As owners of local urgent care clinics, it appears these two individuals are releasing biased, non-peer reviewed data to advance their personal financial interests without regard for the public's health.

COVID-19 misinformation is widespread and dangerous. Members of ACEP and AAEM are first-hand witnesses to the human toll that COVID-19 is taking on our communities. ACEP and AAEM strongly advise against using any statements of Drs. Erickson and Massihi as a basis for policy and decision making.

You can choose what professional medical associations made up of tens of thousands of physicians say, or you can believe two random doctors from Bakersfield. (Or any of a handful of dissenting voices on the internet—do not @ me with your YouTube "research," please.) Or you could recognize that in the modern scientific era, a majority consensus in specific areas of expertise is where you should place your bets.

We aren't living in the time of Galileo, where a lone scientific voice tried to break through and was punished for it. Science has evolved, as has the methodology for determining what's legitimate and what's not. We live in a time where lone dissenters in science are either 1) innovative pioneers whose work is checked, verified, and added to the body of knowledge, or 2) quacks or hacks whose work is debunked or discredited for not being scientifically sound.

But let's say you're convinced these doctors are onto something with their data. They do sound quite scientific and doctory, after all, and you've heard that a few other (notably preliminary, non-peer-reviewed) studies have come to similar conclusions.

Carl Bergstrom, a professor of biology at University of Washington, explained in a detailed Twitter thread why the data extrapolation from the two doctors doesn't make sense.

What they did was simple: they looked at the fraction of patients who tested positive for #COVID19 at the clinics t… https://t.co/XdPVamaflZ
— Carl T. Bergstrom (@Carl T. Bergstrom)1587927043.0

"Unfortunately the misleading claims of those two doctors in Bakersfield keep making the rounds, so I want to very briefly address the problem with what they are saying. I won't get into their possible motives, past political activity, etc.

What they did was simple: they looked at the fraction of patients who tested positive for #COVID19 at the clinics they own. They found 340 out of 5213 tests were positive, about 6.6% Then they assume the same fraction of the whole population are infected.

From there, they scale up to the state level and claim 12% incidence statewide. The news story says it is using the same calculation, but it can't be—how did they get from 6.6% to 12%? Perhaps they estimating infected *ever* versus infected *currently*. It's not clear.

The problem with this approach is that during a pandemic, the people who come into an urgent care clinic are not a random sample of the population. A large fraction of them are coming in precisely because they suspect that they have the disease. This generates sampling bias.

Estimating that fraction infected from patients at an urgent care facility is a bit like estimating the average height of Americans from the players on an NBA court. It's not a random sample, and it gives a highly biased estimate.

Moreover the estimate does not pass even a basic plausibility check.

This is a rate of 0.14% of all people. Not just infected people. All people. That gives us a lower bound on the death rate in New York. Not an estimate, a lower bound.

The death rate for infected people is obviously higher than 0.14%, because not everyone in New York has been infected. And yet that 0.14% lower bound is nearly *five times as high* as the 0.03% that the Bakersfield duo are claiming. They've used absurd methodology to arrive at an implausible number.

If the pandemic were not so severely politicized, this would be a non-issue from the start."

The comparisons to the flu really need to stop. No flu season has had 54,000 confirmed cases in a month. No flu season has resulted in refrigerator trucks being backed into loading docks at hospitals to have a place to put the deceased.

When people say, "We don't shut down the country for the flu," well, yeah. Exactly. Because this isn't the flu. Even if COVID-19 did have a similar infection and mortality rate as the flu, we don't have a vaccine and we don't have a proven treatment for this virus.

And the vast majority of people who study infectious disease and pandemics full-time have come to the same conclusions—not just in the U.S., but worldwide. That's why the vast majority of countries around the world have gone on lockdowns. And those that did so early and began testing and contact tracing early have managed to contain their outbreaks. Even here at home, with the far higher death count than anywhere else in the world, we've managed to start flattening the curve with our mitigation lockdown measures.

Obviously, no one thinks we can stay as stringently locked down as we've been until we get a vaccine. We do need to get the economy moving again—but when it's safer to do so than now. We haven't even had a drop off in cases and deaths yet as a nation. Many states are opening up weeks too early, according to the best modeling available. Literally just weeks, but weeks in a pandemic can make or break an outbreak.

There's much that we're still figuring out about this virus, but that doesn't mean we don't know anything. Years of planning and simulations and studying outbreaks and disease around the world have led to the responses we've seen around the world. It's not for "the average flu." It's not some nefarious plot to steal people's freedom. It's an attempt to save as many lives as we can from a disease we can't control and can't treat.

We've made economic sacrifices to do so, absolutely. And if we open up too early, we'll just have to do it all over again, and the sacrifices we've made so far will be for naught.

That's the resounding message from infectious disease experts around the world, no matter what two random doctors in Bakersfield say.