Compton used to be filled with cowboys. See how one mom brought them back. 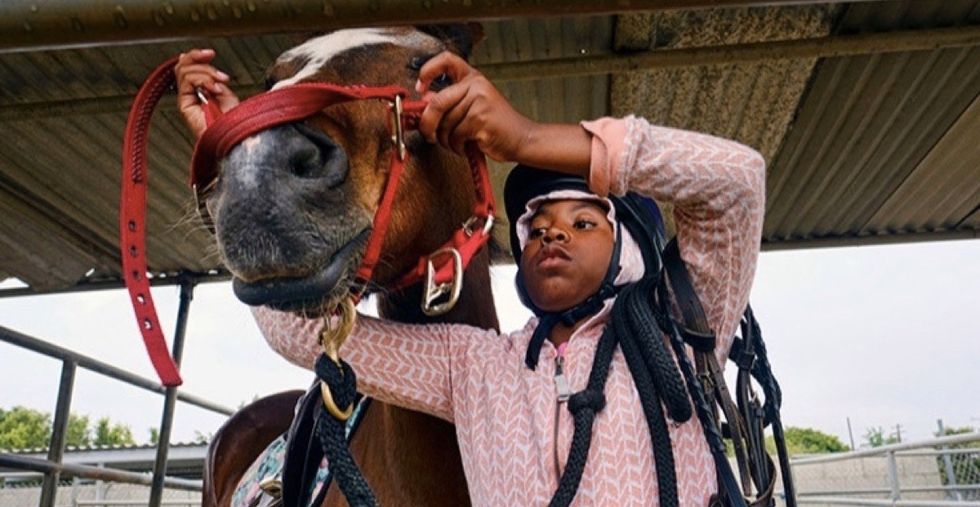 When you think of Compton, California, a few things come to mind.

You might think of rap legends N.W.A. and their three-time-platinum album "Straight Outta Compton" or the Los Angeles suburb's history of violent crime and gang wars in the 1990s.

But odds are, you don't think of cowboys. Until now.

Ivory McCloud and his friend Mike Jones ride along a path under power lines in Compton. Photo by Richard Vogel/Associated Press.

Before Compton was anything, it was a cowboy town. And for many residents, it still is.

The city has undergone multiple transformations since its incorporation in 1888. It's been majority white and majority black, and now the population is majority Hispanic. But the horses have remained a constant.

"My dad was a cowboy. I'm a cowboy. I grew up in Compton. I live in Compton," horse trainer Ivory McCloud told the Associated Press.

McCloud and Jones ride down a street in Compton. Photo by Richard Vogel/Associated Press.

Richland Farms, one of Compton's four neighborhoods, is zoned for agriculture and always has been. In fact, when Rev. Griffith D. Compton donated land to create the city in the 1880s, he specified that Richland Farms be used that way.

Today, the backyards in this semi-rural section of Compton are still large enough to keep horses and other livestock.

"In our neighborhood, there's about 400 homes, a couple hundred horses, and some goats and cows and chickens," Richland Farms resident Mayisha Akbar told the Associated Press.

Akbar moved her family to Compton more than 30 years ago, namely so her kids would have room to ride horses.

She grew up taking care of animals in Harbor City, another semi-rural town about 10 minutes south of Compton. As an adult, she was raising her family in Torrance, California, and working as a real estate agent when she came across Richland Farms and never looked back.

"I was looking for property for an investor and came to Compton ... and thought it would be a wonderful place to raise my own kids, so we moved over," she said. "But then [I] realized that the community was much different from where we had come from."

Just as her family arrived, Compton took a turn for the worse. Gang and drug violence reached its peak. Parents and grandparents in her community were desperate to offer their kids safety and support. Akbar invited many of the children over to her house and started teaching them about horses to keep them busy and out of trouble.

As word spread about the project, many suggested Akbar officially form a nonprofit so she could accept donations to keep the good going. In 1988, the Compton Jr. Posse was born.

For nearly 30 years, the Compton Jr. Posse has served this diverse community.

Through the organization's year-round programs, kids learn about riding, equine science, nature, and the outdoors. They even get involved in community service. The programs are available on a sliding scale, and Compton Jr. Posse has served thousands of kids in its 28-year history. This summer alone, more than 300 kids attended sessions!

The young riders groom and care for the horses.

Adrina Player, 9, places a lead on a horse. Photo by Richard Vogel/Associated Press.

They clean out and manage the stalls.

They prepare their minds and bodies for the work ahead.

And get to work learning the ins and outs of this challenging, competitive sport.

There are also opportunities for students to participate in competitions and put their science knowledge and new skills to use for their community and country.

Compton Jr. Posse participants have advocated for equal access to the outdoors in Sacramento and represented the U.S. at the World Ranger Congress in Arusha, Tanzania and the International Conference of Outdoor Interpretation in South Korea. Jr. Posse riders have competed in countless regional and national competitions.

"Part of what happens when you are in a program like this, especially competing in horse shows, is that it takes you into communities that don't look like your own community," Akbar said. "So the people that we engage and develop relationships with are people that can help them with their future careers and help them go to college."

22 CJP alumni are enrolled in college this semester. Each semester they stay in school, they're eligible to earn a scholarship from the organization. Many also return to Compton Jr. Posse during summer breaks to teach the next generation of riders.

The cowboys (and cowgirls) of Compton are remarkable young people carrying on the tradition of their city's deep agricultural roots.

The lessons they learn and skills they build with the Compton Jr. Posse (like patience, persistence, confidence, and trust) will carry them to bold, bright futures. Possibly on horseback.

"They're just kids," Akbar said. "They want to belong. They want better for themselves and their families. Our program has opened their eyes to possibilities."