The gender gap is strong in space. 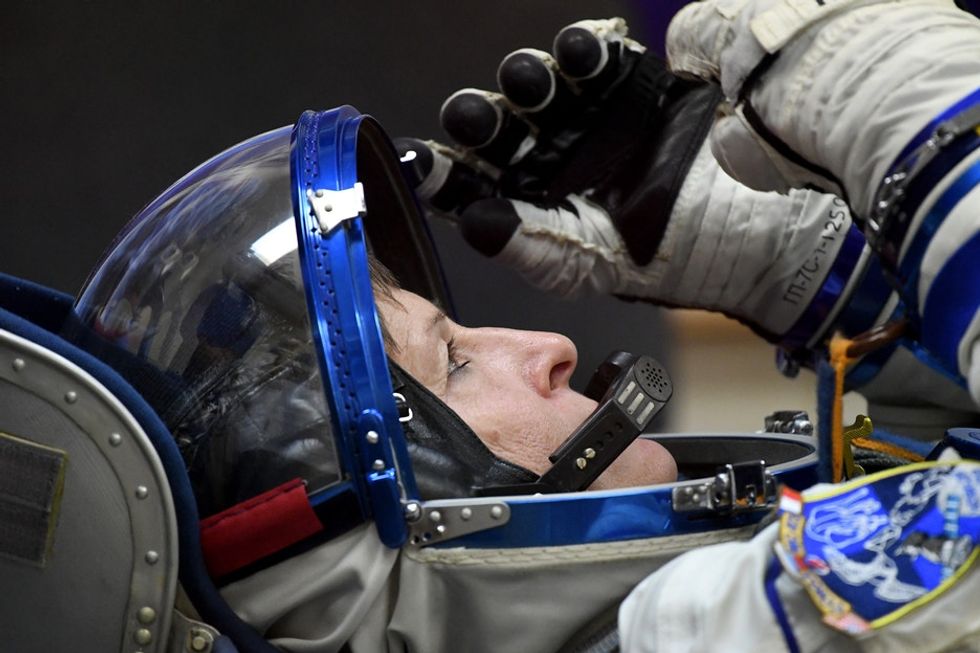 Early Friday morning, Peggy Whitson made history as the oldest female astronaut to go into space.

Her record-breaking voyage launched from the Baikonur Cosmodrome in Kazakhstan.

Whitson's achievement is great news and a reminder that people are capable of doing amazing things at any age.

59 women have been to space, and Whitson set the record as the oldest to do so at 56 years old. While it's certainly an achievement, it's far from the first record she's ever set.

Whitson has already racked up 377 days in space — the most of any woman in history — and became the first woman to command the International Space Station back in 2007. She also brought other women along on her journey of busting through career barriers on the way to space. In 2008, Whitson and Pam Melroy became the first two women to dock a space shuttle and the ISS.

But the oldest man to ever go into space was 21 years older than Whitson is now.

Despite Whitson's many accomplishments in the space race, her name probably sounds a lot less familiar to you than the man who holds the record for oldest person in space: astronaut John Glenn, who set the record at the age of 77.

John Glenn about to make history on the US space shuttle Discovery. Photo by AFP/Getty Images.

Glenn first made history as the first astronaut to orbit Earth back in 1962. Aside from being an astronaut, he was also a U.S. senator from Ohio, so it's understandable that his name is quite well-known.

Still, it's hard not to wonder why female astronauts like Whitson, who have many records under their belt, get so much less recognition than their male counterparts.

Simply put, in many cases, men were given the opportunity to set records and make space history before women were ever allowed to.

This goes all the way back to the founding of the astronaut program in 1959; NASA didn't start accepting female astronaut candidates until 1978.

In 1959, there was also a small group of female astronaut candidates called Mercury 13 who were deemed qualified to go into space by a privately funded program, the BBC reported. Unfortunately, NASA turned down Mercury 13 because at the time, astronauts were required to be test pilots first, a job women were not allowed to hold. Tricky little catch-22 there.

On Oct. 11, 1984, astronaut Kathryn D. Sullivan became the first woman to do a spacewalk, 19 years after Ed White first ventured outside a spacecraft in 1965.

Kathryn D. Sullivan and her space suit on a 1990 shuttle mission. Photo via NASA/Wikimedia Commons. Ed White on his space walk, June 3, 1965. Photo via NASA.

This kind of age gap between genders doesn't exist in a vacuum.

The last Oscars season saw an average age difference of 10 years between the male and female nominated actors. This kind of discrepancy is the result of a number of factors, including a drop-off in available roles for women over a certain age and the fact that younger actresses are often cast to play older roles, not to mention the age gap between male and female actors who play romantic pairs on screen, which is even wider.

This matters because when we get used to seeing things a certain way, we start to accept that that's just how things are. An alarming example of this turned up in a study conducted in 2014 by the Geena Davis Institute on Gender in Media, which found that in crowd scenes in movies, women make up about 17% of the crowd — a stat that mirrors the 16.9% of women who held Fortune 500 corporate board seats in 2014 and isn't far off from the 19.4% of women elected to Congress in 2015.

"We just heard a fascinating and disturbing study, where they looked at the ratio of men and women in groups," Davis said on NPR in 2013 when that 17% number came up again. "They found that if there's 17% women, the men in the group think it's 50-50. And if there's 33% women, the men perceive that as there being more women in the room than men."

Just because something feels equal doesn't mean it actually is. Seeing women of all ages, races, and body types playing the same range of roles male actors get to play (and getting paid the same amount) isn't just important because it's nice for people to see people like themselves on screen. It's important because these kinds of patterns subconsciously shape the way we see and interact with the real world around us every day.

The good news: NASA has made huge strides in recent years toward closing its gender gap — and Peggy Whitson is just part of that success.

Half of NASA's most recent class of astronauts are women, and they might be among the first humans to venture to Mars. Eileen Collins became the first woman shuttle commander in 1999 and returned to command again in 2006. In 2008, South Korean astronaut Yi So-yeon become her country's first space traveler when she boarded the International Space Station.

Men may have gotten to a lot of the "firsts" when it comes to setting records in space, but there's a whole universe of other records waiting to be set, many of which will probably be achieved by women.

This is what makes Whitson's achievement as the oldest woman in space so worth celebrating. Remember her name. She's changing the way we see the world and what we think women over the age of 50 are capable of. Who knows, maybe 22 years from now, when she's 78, Whitson will break John Glenn's record and become the oldest person ever in space.