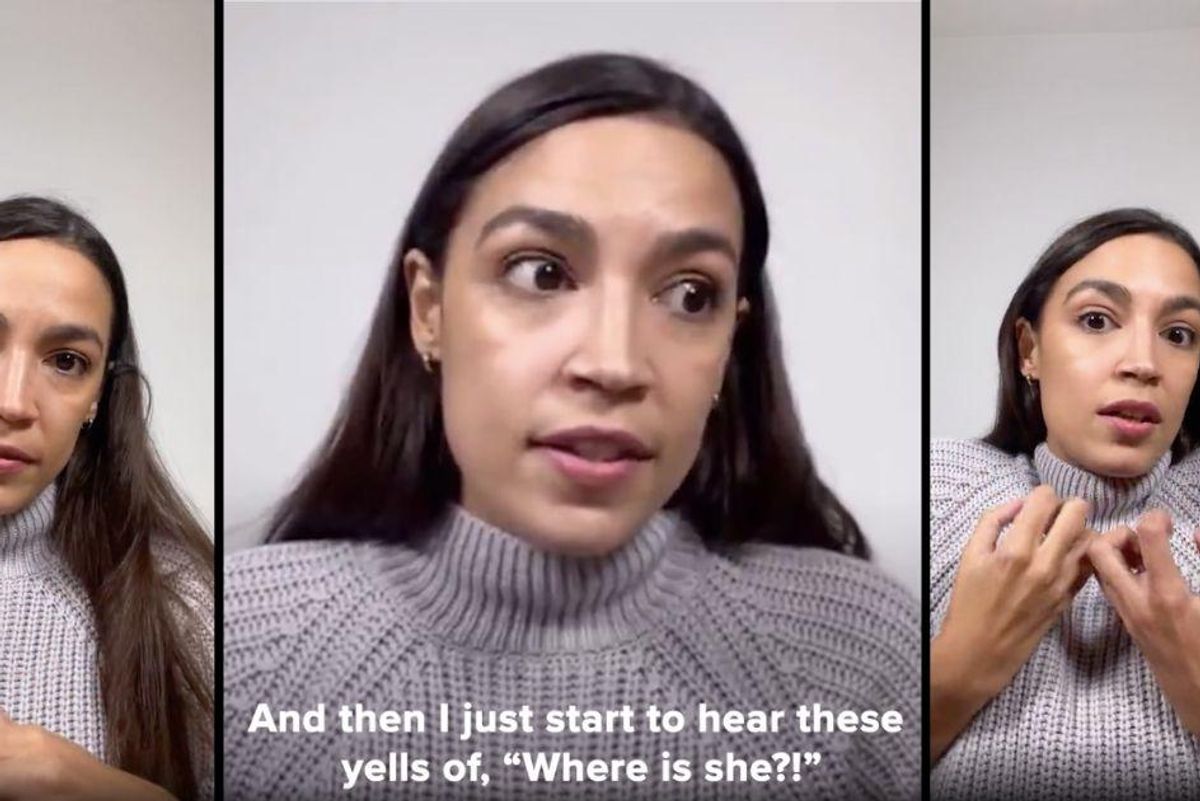 What happened at the U.S. Capitol on January 6 was a violation. Even Americans observing from home felt it. The loss of security. The destruction in the seat of our democracy. The peaceful transfer of power tradition broken. The flag of the United States being replaced by the flag of Donald Trump.

The details of the storming of the Capitol have only gotten worse as more footage has come out. It's now clear how narrowly our lawmakers escaped a rabid mob who had built gallows and chanted "Hang Mike Pence!", who sent men dressed in tactical gear and carrying flex cuffs into Congress chambers, who dared to carry white supremacist symbols through the hallowed halls as they trespassed, leaving a trail of literal piss and shit behind them.

Few Congress members have given detailed accounts of what they personally experienced that day, but there's no question it was traumatic for everyone involved. Lawmakers had to flee for their lives. People were killed in their workplace as they hid from the insurrectionists. They survived a terrorist attack. That's a big deal.

But it would be wrong to pretend the threat was equal for all lawmakers. Republican members of Congress who peddled election lies were not the target of the attack (some, in fact, appeared to be on the side of the insurrectionists). Considering the nature of the mob and what they were there for, the worst position to be in that day was to be Democrat woman of color.

Alexandria Ocasio-Cortez fits that bill. As an attractive, outspoken woman, she has also been a specific target of violent and often sexualized death threats online since she came to Congress. But it's one thing to deal with online trolls, even particularly troubling ones, and another to know that there is a mob who wants to kill you roaming the halls of your workplace looking for you.

Other women of color who serve in Congress spoke of their trauma and fears of the racist mob during the attack in a piece published on Slate yesterday. But AOC took to Instagram Live last night to share a much more detailed account of what she personally experienced.

The full video (shared below) is long, but it's worth watching. After making it clear that it's her personal story, not "the" story of the Capitol attack, she shared a detail that informed her experience and shouldn't be brushed aside. AOC is a sexual assault survivor—an admission she'd never made publicly before. It's an important detail because 1) It's not uncommon—approximately 1 in 5 American women have survived a rape or attempted rape, which means it's statistically likely that many other members of Congress are also survivors, and 2) That trauma colors other traumatic experiences—such as surviving a terrorist attack—since trauma tends to compound.

AOC's description of how she hid in the bathroom and thought she was going to die is harrowing, but details in the story require an understanding of her perspective as a survivor. For instance, as she was hiding in the bathroom, a man came into her office yelling "WHERE IS SHE? WHERE IS SHE?" In those few seconds, she literally thought she was going to die. It turned out the man was a Capitol Police officer, but he didn't announce himself as such. As she was hiding behind the bathroom door, all she could see was that he was a white man in a beanie cap. When her aide told her it was safe to come out, she did, but even then she said something didn't feel right, as the officer looked at her with anger and hostility.

She questioned if she was projecting. Maybe she was. That's the thing about having survived a sexual assault and knowing you're a target in an attack—you really don't know who you can trust. And considering how terribly prepared law enforcement was for the attack, she had reason to be fearful.

The officer told her and her aide to flee to another building but didn't tell them exactly where to go. She ended up banging on the door of Rep. Katie Porter's office and hiding out in there for hours. She changed out of her heels and into gym shoes that belonged to one of Porter's aides and borrowed a puffer jacket from Porter in case she needed to escape out a window and blend in with the mob. She worried about the aides who were willing to put themselves in between the mob and the lawmakers.

The simple telling of the story, with AOC talking straight into the camera, is powerful. It's a reminder that this is not just about politics, but about human beings, that what they experienced in that attack was real, and terrifying, and traumatic. And most importantly, it makes it clear that calls to "move on," as if the attack wasn't really a big deal or should just be forgotten, are wrong.

That point cannot be made any clearer. The lawmakers who don't want people held accountable for the Big Lie that led to American citizens attacking their own government in a violent coup attempt are wrong. The attack on the Capitol wasn't just a random blip—it was an enormously big deal. According to the Coup D'etat Project at the University of Illinois' Cline Center—an academic group dedicated to studying government overthrows around the world—Jan 6 was an "attempted coup d'état: an organized, illegal attempt to intervene in the presidential transition by displacing the power of the Congress to certify the election."

An attempted coup on behalf of an outgoing president who refused to accept the results of an election is unprecedented and unAmerican. And yet lawmakers are refusing to accept and acknowledge their role in supporting the basis for the coup. Even worse, some have called for AOC to apologize for being angry at the lawmakers who pushed the Big Lie—which she rightly called out as a manipulation tactic used by abusers to avoid accountability.

Unfortunately, one of the reasons people don't speak about traumatic experiences is that they fear they won't be believed. Not being believed just adds to the trauma, but it's a common scenario with sexual assault, as well as domestic violence and other forms of abuse. Considering the video footage we have of the Capitol attack, AOC's account of what she experienced is totally believable, but she's still being attacked for being "overly dramatic" or making it all up or using it as a way to manipulate people.

Telling her story is an act of courage and hopefully it will inspire other Congress members to share their own accounts. It shouldn't be necessary, and no one should feel pressured to relive their trauma for all the world to see, but since there's a whole lot of denial going on, we need to hear these stories to get the full picture of what the Capitol attack entailed and what it meant. There can be no "moving on" without fully investigating this attack on our country and holding those responsible for it accountable. To suggest otherwise is simply wrong.