Allies took a stand for praying Muslim students at the University of Michigan. 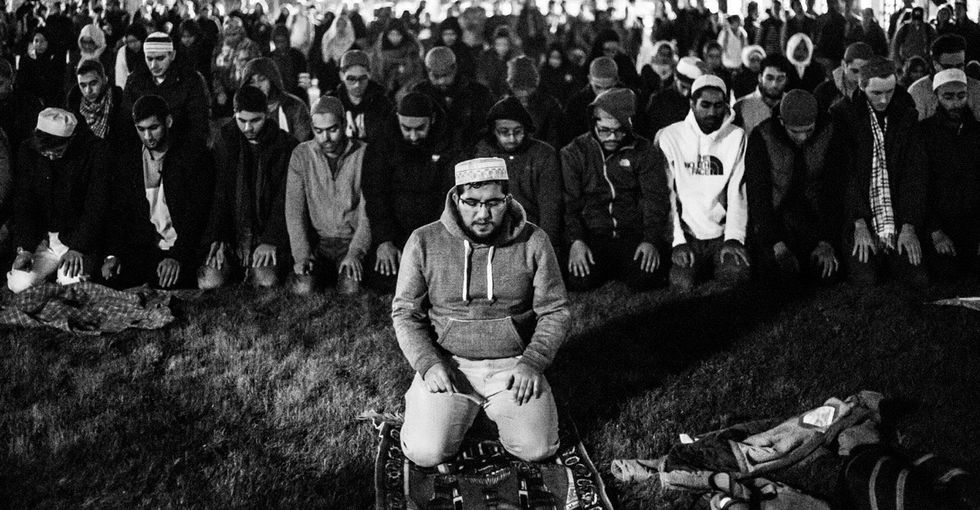 Just days after the election, a Muslim student at the University of Michigan  was approached by a stranger who ordered her to remove her hijab under threat that he would set her on fire.

According to Nusayba Tabbah, the internal vice president of the school's Muslim Students' Association, this was not an isolated event, but rather, an acceleration of an anti-Muslim climate on campus.

In response, the school's Muslim students decided to reclaim their space on campus — a reminder that they have the same right to be there as any other student.

MSA program committee member Rami Ebrahim suggested the group gather to pray one of their five daily prayers, ishaa, in public. In doing so, the community would be making a powerful statement, letting those who seek to antagonize them know that they will not be bullied into hiding who they are and what they believe.

The Muslim Student Association held a group Ishaa prayer at University of Michigan, with two hundred non-Muslims standing guard in a circle around them

A few non-Muslim friends were asked to circle around the group during the prayer as a show of solidarity. What they got was so much more.

"I was surprised and overwhelmed by the number of people there — both Muslim and non-Muslim," Tabbah wrote in an email. The crowd was made up of an estimated 300 people.

"It reminded me that I have a lot to be grateful for," she continued. "We are part of an amazing community that has repeatedly spoken out about the growing hostility towards Muslims and other minorities."

Solidarity and compassion for one another is crucial. Nobody should be made to live in fear because of their religious beliefs or skin color.

"We must not stand silent while facing expressions of bigotry, discrimination or hate that have become part of our national political discourse,” wrote school president Mark Schlissel in an email to students.

Right now, more than any other time in recent history, we must stand on the side of acceptance; we must stand against bigotry. The Southern Poverty Law Center, an organization that tracks hate crimes and hate groups, has found the uptick in hate crimes to be greater in the current post-election landscape than even in the immediate aftermath of the 9/11 attacks. Since Election Day, the group has logged more than 400 events of harassment and intimidation.

Now is the time to be an ally to Muslims and other minorities, and that means taking action.

For one, it's important to educate yourselves and to help educate others. Tabbah recommends getting to know your Muslim neighbors, noting that many people who fear or hate Muslims simply don't know any.

Just as important: We can't let this type of bigotry and harassment become the accepted norm.

"I think it's important to speak out when we hear or see something wrong," Tabbah adds.

"We can't let ourselves become desensitized to hateful rhetoric because that just normalizes it."

We don't have to give in to a culture of fear. We can fight back. We can be a force for good in this world.