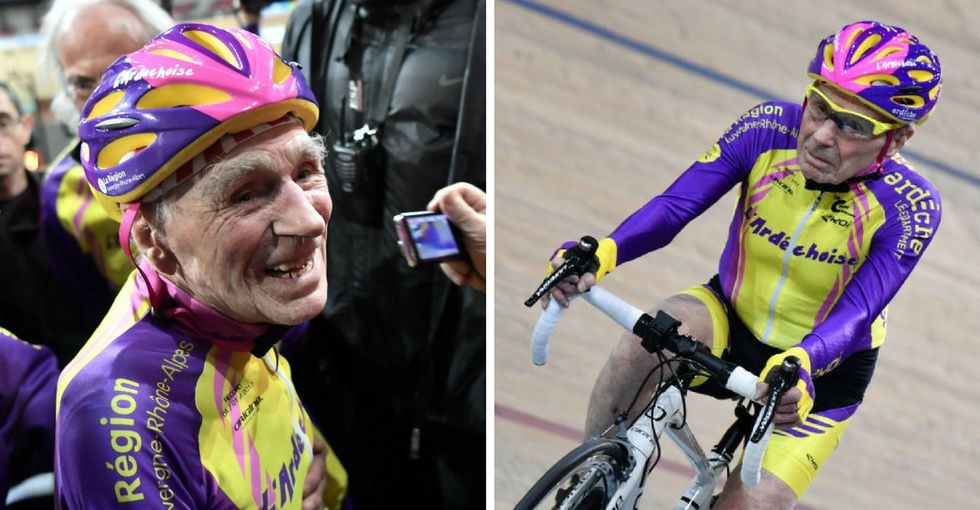 Although he loved cycling, Robert Marchand stopped participating in the sport when he was just 22 years old.

His coach told him that, because of his small stature, Marchand would never become a cycling champion, CNN reported. So, Marchand figured, what's the point?

Marchand, who was born in France in 1911, went on to do other exciting things with his life after locking his bike away all those years ago. But his passion for cycling never truly subsided.

Now — more than eight decades after he first decided to quit — Marchand is proving his old coach dead wrong.

On Jan. 4, 2017, Marchand set a new cycling record at the age of 105. And the world is giving him a much-deserved standing ovation for it.

In one hour, Marchand pedaled 14 miles at the Saint-Quentin-en-Yvelines velodrome cycling competition near Paris.

It's a new distance record for the 105-and-up category — a pool created specially for Marchand, according to the Associated Press.

"I didn't see the sign for the last 10 minutes, otherwise I could have gone faster," the smiley record-setter told BFMTV.

Still, he explained, he's "not here to break any record."

Amazingly, it wasn't even until age 75 that Marchand decided to get back into the sport, CNN reported.

It's not as if he'd been lying low all those years, though. Throughout his adult life, the French veteran — who's lived through both world wars — has worked as a firefighter, a gardener, a lumberjack in Canada, and a truck driver in Venezuela, just to name a few.

After getting back into cycling as a senior, Marchand has completed impressive cross-country trips, like Bordeaux to Paris and Paris to Moscow, according to ESPN.

"He never pushed his limits, goes to bed at 9 p.m. and wakes up at 6 a.m.," Gerard Mistler, Marchand's friend and coach, told AP. "There's no other secret."

Life's about so much more than riding bikes and setting records, and no one understands that better than Marchand.

The 105-year-old — who will turn 106 in November 2017 — is going strong thanks to his love of laughter, looking at the glass half-full, and a great group of friends who keep him young.

He's living proof that age really is just a number.

"Setting goals for himself is part of his personality," Coach Mistler said. "If he tells me he wants to improve his record, I'll be game. Robert is a great example for all of us."

Whether you want to graduate from college at 99 or deadlift 225 pounds at the gym at 78, Marchand's cycling record is yet another great reminder that none of us is too old to dust off an old bike and hop on for a brand new adventure.