After being disqualified for breaking a tournament's 'no girls allowed' rule, her team had her back.

Kids' sports don't need to be split by gender. 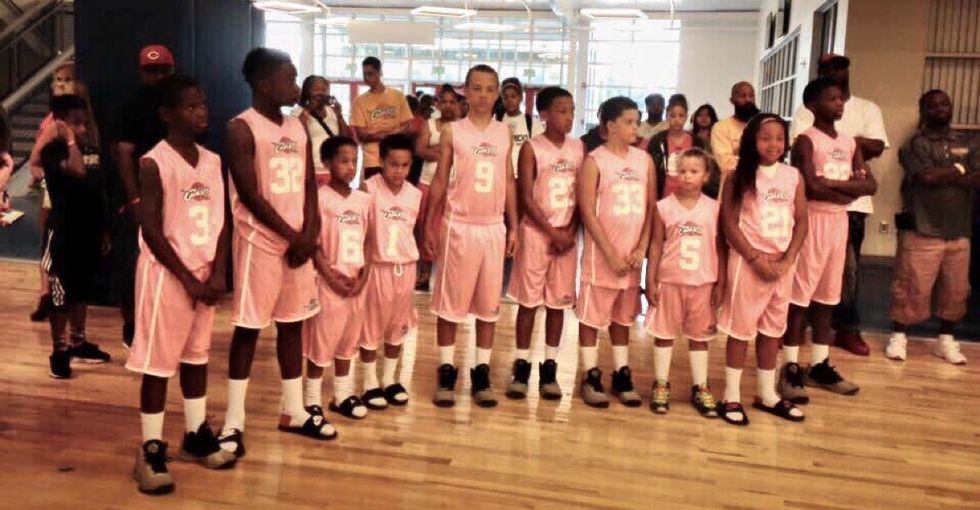 For the past two seasons, 10-year-old Kymora Johnson has played basketball for the Charlottesville Cavaliers.

For years, Kymora wanted to be part of a team, and as soon as she was old enough, Kymora's mom, Jessica Thomas-Johnson, signed her up.

Kymora has played point guard for the Virginia-based team ever since and played with them in the national championship tournament each of the past three years. And while the first two trips to the tournament went without a hitch, things didn't go so great this time around.

After the game, however, tournament officials told Cavaliers coach Joe Mallory that the team had broken a rule and that the game would be recorded as a 1-0 loss.

The Cavaliers had been disqualified. And the reason? Kymora is a girl.

As it turns out, a new rule had been added to this year's tournament rules: No girls allowed.

In an interview with ABC News, Mallory said he had no clue there had been a rule change, and he has a point; there's no mention of this rule on the tournament eligibility website.

"As adults we know life isn't fair all the time but it was very touching to see these kids hold their heads high and stand up for what is right." — Facebook post by the Cavaliers

"I said, 'You checked us in.' We went through the whole process," he told ABC. "They already knew that she was a female from the check-in. ... They go through an interview process with the staff of the NTBA, and they ask them questions. She had a pink bow and had her hair down. They knew she was a girl."

The rule is actually hidden on a separate page titled "Other Rules/Regulations."

The tournament states that because there are both girls and boys divisions, Kymora needs to play on a girls team. There's just one catch: The Cavaliers don't have a girls team in her age group.

Staying true to the team motto, "Team first, me second," Kymora's teammates came together in her support.

The team showed up to the semifinal game they would have played in wearing the pink uniforms they'd worn in the past to show support for breast cancer awareness — this time to support their teammate, Kymora.

The team posted a message to their Facebook page:

"Everyone at this tournament knows these kids deserved to play. We were in pink to once again represent Breast Cancer and also support our own Kymora Johnson. We had our own quiet protest in what we believe is not right. Everyone else cheered us on and shook the kids hands. As adults we know life isn't fair all the time but it was very touching to see these kids hold their heads high and stand up for what is right. As we say often 'basketball is more than just a game.' ‪#‎lifelessons‬"

Heartwarming stand of solidarity aside, Kymora's story begs the question: Why is it necessary to split things into "boys" teams and "girls" teams, especially at such young age?

In an article for Reason, A. Barton Hinkle asked just that: Why do we still segregate sports by gender? The reason behind sex-segregation is usually explained by pointing to the fact that men typically have higher levels of testosterone than women and have more upper body strength on average as a result.

"Sports are one of the last bastions of society where equality of opportunity reigns – and equality of results is out of place. Boxing and mixed martial arts make allowances for physical type by dividing participants into different weight classes. Most sports don't. And many sports, from fencing to diving, demand qualities other than mere brute strength. So why segregate them?

And this goes without mentioning the fact that at 10 years old, prior to puberty, it's not as though there's any difference between boys and girls in terms of athletic ability.

Splitting kids up so young serves what purpose exactly? To instill the idea that when it comes to sports, girls are less awesome than boys? To prepare them for a lifetime of being told they "play like a girl?"

There's nothing wrong with "playing like a girl." If youth sports are meant to teach life lessons, that's a good one. It's a shame the tournament organizers didn't agree.