A Navy diver thought he heard someone talking to him underwater. Turns out it was a beluga whale. 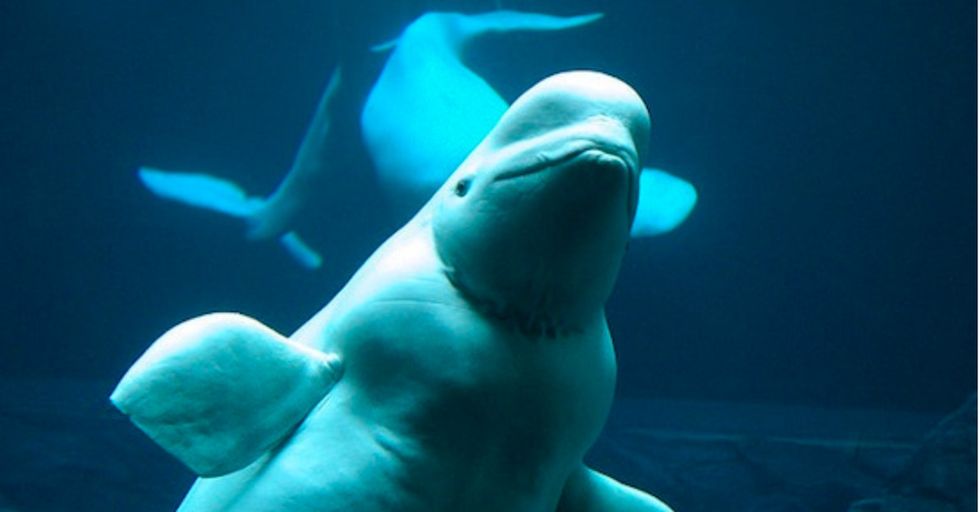 "Noc" was a male beluga who lived a pretty incredible life.

Captured by the U.S. Navy when he was only 2 years old, he was trained in the late 1970s to retrieve sunken experimental torpedoes in the bitter cold waters of the Arctic.

There aren't many public photos of Noc, so here's one of his distant cousins saying "hi." Photo by Mike Johnston/Flickr.

According to marine biologist Sam Ridgway, who worked with Noc (pronounced No-See) and other Navy whales, the marine mammals did their jobs dutifully and often formed a deep bond with their trainers.

“They come to think of us as family," Ridgway told Smithsonian magazine. “And that's the reason they stay with us. We have no way of completely controlling them, and yet they do their job and come back. They kind of view themselves as part of a team."

But being part of a team that tested innovative military technology wasn't even close to the coolest thing Noc ever did.

One day during training in 1984, a Navy diver swore he heard his supervisor give a command over the intercom. Turns out, it was Noc.

Always energetic, precocious, and eager to bond with his human colleagues, Noc had been studying the way they spoke to each other for years.

The diver swore he heard a voice order him out of the training tank. But his supervisor gave no such order. It was all Noc, who made the human-like sounds by over-inflating his nasal cavity in order to distort his voice.

From then on, Noc spoke often, and even on command. Give him a listen:

Noc's handlers were stunned. He had learned to imitate human speech patterns.

And while Noc might not have been as good of a mimic as some bird species, it's likely his humanlike warbles had intent behind them, like he was trying to tell us something — that he was in distress, happy, or even just bored.

Though his mimicry was one-of-a-kind, Noc isn't the only whale with amazing auditory powers.

We know that most whales have powerful hearing abilities like Noc — blue whales can communicate with each other over distances of nearly 1,000 miles.

But what's even cooler is that beyond listening, whales can also use sound to understand their worlds in an almost human way.

According to Lori Marino, a cetacean intelligence specialist at Emory University:

Their brain "brings things together, synthesizes and does complex processing in ways we obviously don't understand yet. But it's not as though we have this huge complex whale brain and no commensurately complex behavior. They are individuals. They have lives to lead and social relationships. They have families, and they have really good memories."

So why haven't there been more cases of whale communication like Noc's?

This thing just looks loud. Photo by David B. Gleason/Flickr.

Whales in the wild are often forced to compete with overpowering noise from massive supertankers and huge oil machinery when they try to listen for other sounds.

This noise can disrupt a whale's ability to communicate, navigate, hunt, and breed. The noise has even been linked to declining beluga numbers over the years.

Even captive whales, which should have enough human interaction to replicate what Noc was able to do, are apparently bombarded by noise. Places like SeaWorld are so loud, in fact, that the whales pretty much just turn their ears off.

If we can find a way to quell the racket, maybe we'll find another Noc someday.

As humans, we fantasize about one day bridging the language gap with animals. We teach sign language to gorillas. We train parrots to speak. We even invent devices that supposedly translate our dogs' barks into English.

Maybe it's fantasy to think we'll ever truly share a language with another species. But it's exciting to think there might be creatures out there, just like Noc, who want to talk to us just as badly as we want to talk to them.