A national park worker opened a bumpy envelope to find an adorable note — and a surprise. 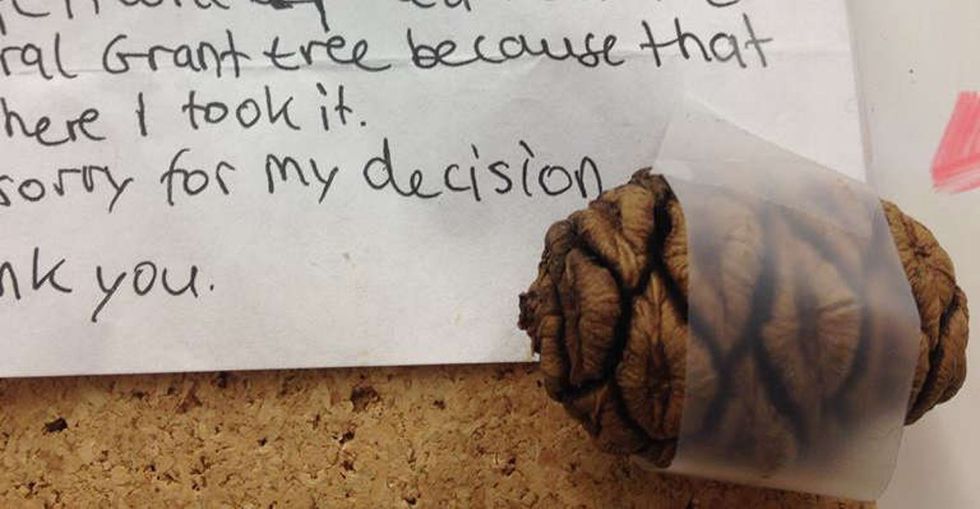 Susan Gardiner was opening the mail for Sequoia and Kings Canyon National Parks when she came across an envelope with a large lump — and no return address.

"I was a mail carrier for 15 years before that, so yeah, you’re always cautious of mail that has no return address," Gardiner told Upworthy.

After carefully opening the letter, the park administrator said she "got a chuckle over what [she] found inside."

It was a sequoia cone, taped to a note:

It's actually a sequoia cone. Still cute though. Photo by Meredith Elgart/Facebook.

The note, in a child's handwriting, was sent anonymously.

“I had to share it because it was so moving and so cute," she said. "So I shared it with the interpretation department, and they said they would get the cone back to where it belongs.”

True to their word, rangers placed the cone back near the General Grant tree.

"We are so glad this young person thought about the park's preservation messages," an official wrote on the park's Facebook page. "Thanks for leaving Sequoia and Kings Canyon Parks as you found them. And, thanks for sending this back, buddy!"

This is a small piece of good news, and one that America's national parks could certainly use.

Though their season is only a few months in, parks across America — particularly Yellowstone — have already played host to a series of incidents where tourists violating park rules ended in tragedy.

In May, a baby bison that was picked up by Yellowstone tourists who spotted it alone on the side of the road had to be euthanized by rangers after it couldn't be returned to its herd.

And on June 9, 2016, a 23-year-old man died in the park after wandering off a boardwalk and falling into a hot spring.

The return of the sequoia cone, meanwhile, is likely to make a lot of squirrels very happy.

A squirrel eats a meal near the General Grant tree. Photo by Farmatin/Wikimedia Commons.

"Everything in nature is connected," Dana Dierkes, public affairs specialist at the parks, told Upworthy.

Dierkes explained that while pocketing a single giant sequoia cone might not seem like a big deal, for the rodents who depend on them for a food source, maintaining an untampered ecosystem is critical for their survival and success.

All it took was one child — and their parents — who decided to do the right thing.

Gardiner and Dierkes both hope the letter writer's honesty and responsibility will serve as an example to other visitors.

"I was a Girl Scout, and one of the things I learned in scouting is that the only thing you take is pictures and the only thing you leave is your footprints," Gardiner said. "So if you take stuff, there’ll be nothing left for other people to enjoy."