A dad used his daughter's princess phase to teach leadership skills, and it's perfection. 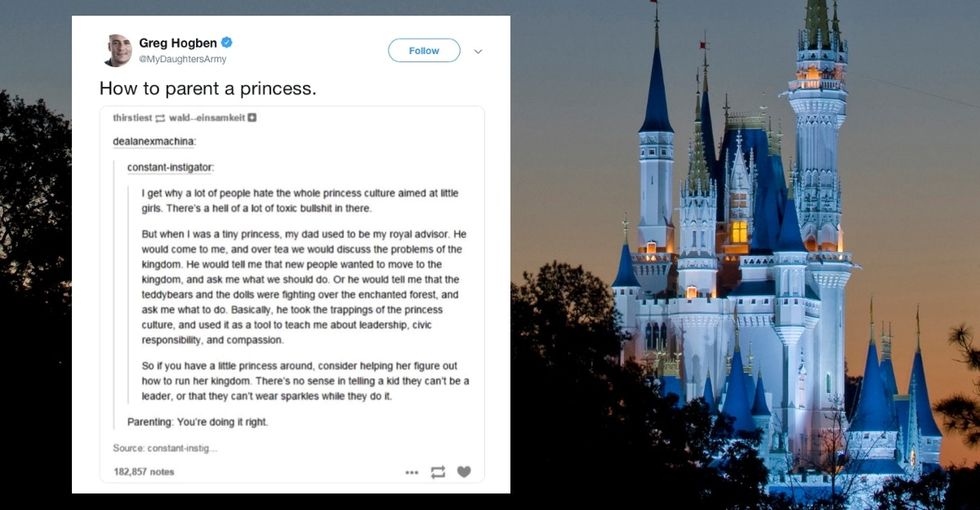 The way this dad handled his daughter's "princess phase" is parenting at its best.

Thanks to Disney upping their princess game with strong, independent female leads, raising a princess-obsessed daughter isn't as potentially problematic as it used to be. But parents still worry that their little girls' fascination with sparkling crowns and palaces may lead them to unhealthy ideas about gender roles and expectations.

Will she think it's desirable to be a damsel in distress waiting for a handsome prince to rescue her? Will she realize that that petticoats and corsets are totally impractical, or see them as the sacrifice one makes for being pretty? Will she romanticize the wrong things and flush away everything her feminist foremothers fought for?

These are the kinds of questions many parents ask when their daughters go through the oh-so-common princess phase. And that's why people are hailing one dad who parented his daughter during that phase as a hero.

"He took the trappings of the princess culture, and used it to teach me leadership..."

The post, written by someone with the handle "constant-instigator," reads:

I get why a lot of people hate the whole princess culture aimed at little girls. There's a hell of a lot of toxic bullshit in there.

But when I was a tiny princess, my dad used to be my royal advisor. He would come to me, and over tea we would discuss the problems of the kingdom. He would tell me that new people wanted to move to the kingdom, and ask me what we should do. Or he would tell me that the teddybears and the dolls were fighting over the enchanted forest, and ask me what to do. Basically, he took the trappings of the princess culture, and used it as a tool to teach me about leadership, civic responsibility, and compassion."

"So if you have a little princess around," the commenter continued, "consider helping her figure out how to run her kingdom. There's no sense in telling a kid they can't be a leader, or that they can't wear sparkles while they do it."

Rather than fight against his daughter's penchant for princesses, he utilized it for good—and made learning fun and meaningful for her.

As a parent of two daughters, the way this dad handled his daughter's imagination inspires me. So often we forget that kids learn best when lessons take place in their world, and turning the tables on the princess theme was a brilliant way to do just that.

A princess doesn't have to be the traditional maiden lying in wait for Prince Charming. She can be the ruler of a kingdom, a benevolent philanthropist, a commander of warriors, or a rugged individualist. She can solve problems, make hard decisions, analyze pros and cons, and think about how her choices will affect all involved.

And parents can help facilitate all of that thinking and learning through playing with their little princesses, even while straightening her sparkly crown.

Way to go, dad. Thanks for inspiring us to play princess in ways that educate and empower our girls.