A dad gets a standing ovation for his message to boys interested in dating his daughter.

"To all the boys who may one day date my daughter..." 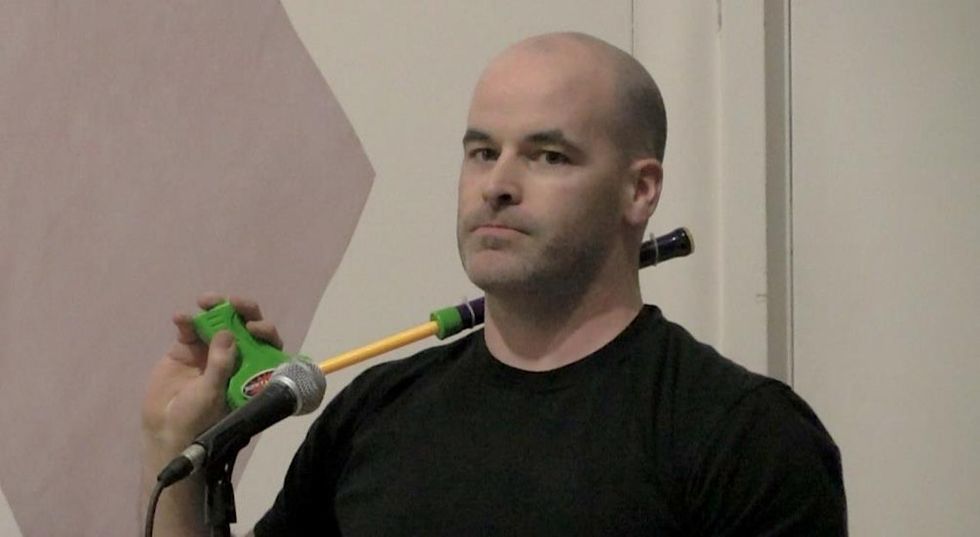 We've seen the sitcom storyline so many times.

The lovable, funny dad hates every boy that's even a tad bit romantically interested in his daughter.

It's an old TV trope that's definitely stuck around. It's even the entire premise of some shows ("8 Simple Rules for Dating My Teenage Daughter," anyone?).

Clearly, the cliche is good for a laugh every now and then. But here's a question: What does this old trope really say about us?

After all, dads (in both the TV world and the real one) don't seem to get as bent out of shape over who their sons date. And, correct me if I'm wrong, but moms tend to be more open to the crazy notion of getting to know their daughters' male love interests before graduating to threats of violence.

Poet (and father) Jesse Parent brilliantly skewers this overprotective dad trope in "To the Boys Who May One Day Date My Daughter."

In the satirical performance, which you can see in the video by Button Poetry below, Parent hilariously (and maybe a bit disturbingly) goes into graphic detail about the violence he'll resort to if you happen to date his teenage daughter.

Again, the performance is satirical, and Parent is in no way advocating violence. What he is doing is making fun of the idea that a father like himself would be so irrationally devoted to keeping his daughter away from another male that he'd become homicidal.

It's funny in that "haha ... wait a second..." kind of way. Because he's really getting at an unfortunate truth.

"It's a common trope: the man who'd rather lock his daughter in a tower until she's 40 than have to watch some hormone-ravaged 17-year-old paw at her," Beckie Smith wrote for The Telegraph in 2013. "It reflects an insidious and damaging need to control young women's behavior, long after we abandoned the idea that a daughter is her father's property."

Women, of course, aren't their dads' property anymore (thank God). And we live in a time and place where women — at least on paper — are equal to men (I mean, not when it comes to their reproductive rights, or how much they get paid for doing equal work, or the sexism they face in the workplace ... but ... sigh ... those are for another day).

So, is it that big of a deal when a sitcom dad cracks a few jokes about strangling his daughter's prom date?

Girls and women are still fighting to be viewed as autonomous equals to boys and men when it comes to their bodies and decision-making.

It can also place more importance on a young woman's "innocence" and "purity" (*eye roll*), which, to be honest, is just a stone's throw away from slut-shaming.

Don't get me wrong: There's nothing wrong with parents being protective of their kids.

But the level of "irrational parent guarding their child from suitable mates" should be the same for both daughters and sons. Period.