A boy with autism sang at a school talent show. It didn't go as planned. It went better. 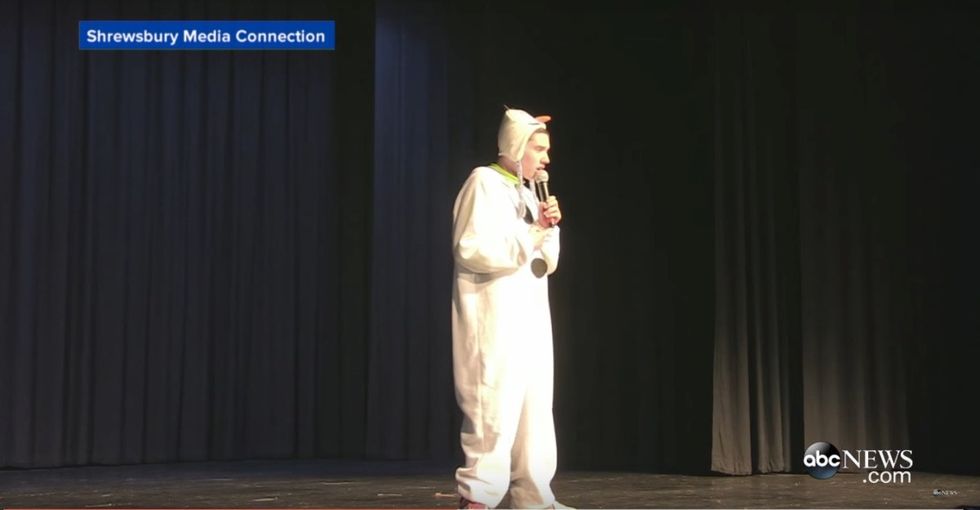 Jagger, who has autism, doesn't attend Oak Middle School in Shrewsbury, Massachusetts. But since his school for kids with autism is out of town, he was allowed to participate in their annual "Oak's Got Talent" event.

He put on his Olaf costume (excellent choice, Jagger) and took to the stage.

"And the fears that once controlled me / Can't get to me at all!"

The lights went up and Jagger began to sing. He got through the first verse OK, but then ... well.

Appearing visibly nervous, Jagger grew quiet at the start of the second verse. But what could've quickly turned into a mortifying moment became a heartwarming show of support.

Seeing their peer stumble, the students at Oaks Middle School sang with Jagger, loud and proud. They even clapped along.

Me too, Kristoff. Me too. GIF from "Frozen."

With encouragement from the audience, Jagger was able to finish his performance and received raucous applause.

It probably looked a little something like this. GIF from "Frozen."

The students didn't know Jagger well, but that didn't matter. He was someone in need of a hand, (or in this case, a few back-up singers), and they were quick to help out.

Jagger is just one of the more than 1 million children in the U.S. with autism. About 1 in 68 kids have an autism spectrum disorder. It cuts across racial, geographic, and socioeconomic lines and can manifest in a variety of ways.

But behind every number, statistic, or new case is a child and a family working through the implications of their particular diagnosis. For many of these families, the future contains a lot of unknowns.

A teacher works with a child with autism. Photo by Franck Fife/AFP/Getty Images.

But moments like this can remind them (and all of us) that you don't have to look far to find kind and empathetic people. They're everywhere you look, even in middle school auditoriums.

So sing out, Jagger! Wherever you are, someone will always have your back.

See Jagger's star-powered performance in this clip from ABC News.