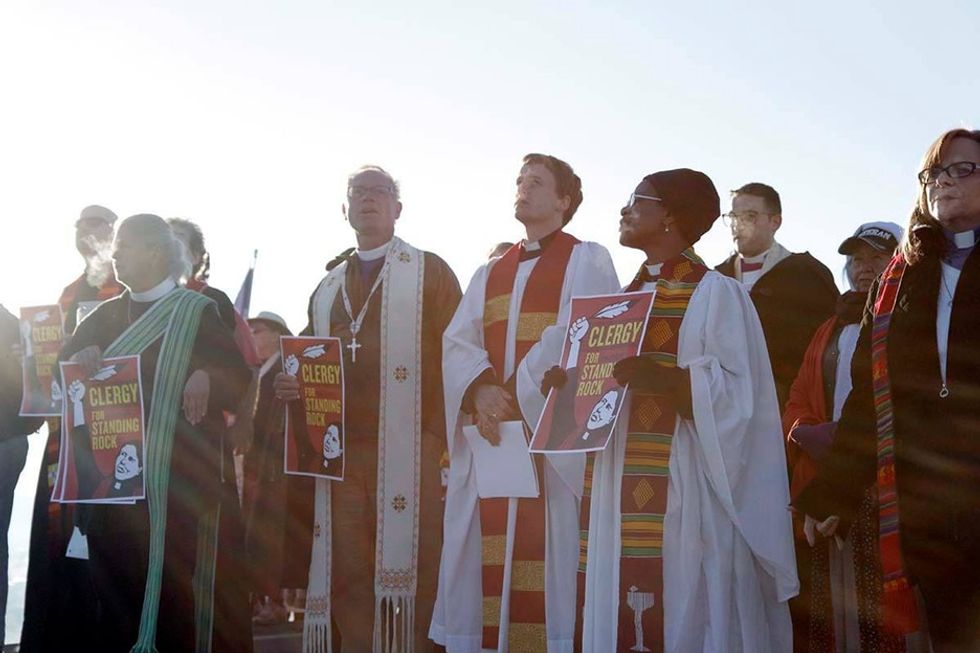 When Rev. John Floberg wrote a letter about Standing Rock to interfaith clergy members all across the country, he hoped to rally 100 people.

"Our duty as people of faith and clergy could not be clearer: to stand on the side of the oppressed and to pray for God’s mercy in these challenging times," the Episcopalian minister wrote.

In the letter, he urged religious leaders to join him for a day of solidarity on Nov. 3, 2016, with the 200-plus Native American tribes protesting against the Dakota Access Pipeline.

And when the day came, he was overwhelmed: More than 500 leaders from 20 different faiths showed up.

‌Floberg stands at the left. All photos by Lynette Wilson/Episcopal News Service, used with permission.

Episcopalians, Baptists, Catholics, and other Christian denominations joined with Unitarians, Buddhists, Muslims, Jews, and more in a morning prayer circle at the Oceti Sakowin camp.

T’ruah, the Rabbinic call for human rights, released a statement saying, "Throughout Jewish history our cemeteries have been desecrated and destroyed. Jews cannot stand idly by while the Sioux community’s burial grounds are threatened by the planned route of the pipeline."

The leaders marched alongside Native American water protectors down North Dakota Highway 1806 to bear witness to the violence against the protectors.

Meanwhile, other religious leaders headed to Bismarck, where they held a protest that locked down the state's capitol building.

Religious leaders also burned a copy of the Doctrine of Discovery, a ceremonial act meant to demonstrate their support of Native American rights.

The papal document, which dates back to the 15th century, has long been used to justify the continued imperialist attitudes that have been used to steal land from and do harm to indigenous people across the world in the name of God.

"By burning copies of the Doctrine of Discovery we were signaling an end to a past that has affected millions and millions of people," explained Bishop Marc Andrus of California. "People who have been colonized and people who have been enslaved, but also the enslavers and the colonizers, it’s affected us all."

And of course, many of them came with charity in the form of food and supplies to ease the ongoing struggles of the water protectors.

Native American protesters, many of whom already live in extreme poverty, have been camping out for months along the path of the pipeline. The Oceti Sakowin and Sacred Stone camps alike are in desperate need of cash and supplies — food, batteries, clothing, warmth, and so on — in order to keep fighting, particularly as the temperature starts to drop.‌

"This is what the love of God enacted looks like," said Rev. Stephanie Sellers.

Sellers is canon to the presiding bishop for evangelism and reconciliation of the Episcopal Church. "As I’m looking around the circle of 524 faith leaders from all over this country, I feel like I’m watching reconciliation," she said in an interview with the Episcopal News Service.

She also led the gathered leaders in song.

Curry is also a representative of the Episcopalian Church. But his sentiment was echoed by many other religious leaders. The president of the Unitarian Universalist Association even released a statement calling the pipeline "a textbook case of marginalizing minority communities."

"Let us not forget ... our native brothers and sisters who are facing the full force of corporate greed and government callousness at the Standing Rock Sioux reservation," said Imam Zaid Shakir.

He also noted, "We need to change ourselves, end our own greed, transform our own souls, and admit our need for Divine aid in overcoming these daunting challenges."

These inspiring acts of faith remind us that we are strongest when we stand together and embrace our differences.

After all Native Americans have been through, they deserve some kind of divine intervention, in whatever form that might take.