5 things about being a parent on Halloween that every mom or dad can relate to. 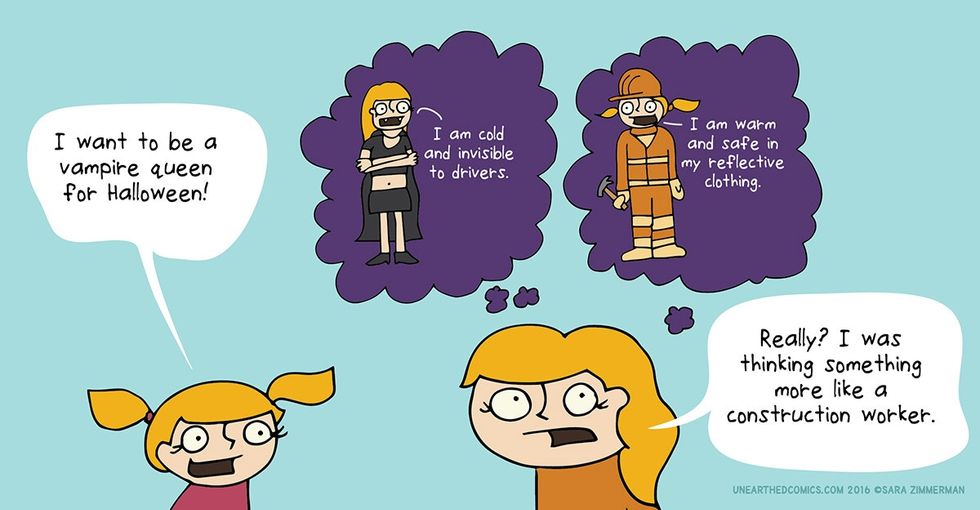 My daughter tells me that Halloween is one of her favorite holidays because she “can dress up and be anything she wants for a day.”

Awwwww ... so cute! In a world filled with frustration and unlimited obstacles, I love that this day encourages her to foster her creative fantasies. As a supportive mom, I want to entertain her ideals and make her Halloween extremely special. And what could be more important than planning next year’s costume?

Like a proverbial PEZ dispenser of ensemble ideas, her Halloween costume planning begins on the floor, adorned in her current costume, sorting the sweet bounty of her prior hours of trick-or-treating. “Next year, I want to be a skeleton princess,” she’ll say with a mouthful of nuts saturated in high-fructose corn syrup. “Sure,” I say to her as I get her toothbrush ready. As a parent of an 8-year-old, I’ve learned better than to put too much weight into these premature moments of costume planning.

I now wait until the grim reaper appears on those orange and black signs, promoting the opening of temporary costume shops in previously vacant storefronts. We then look together online, through thrift stores, and in these surprisingly overpriced costume outlets to explore exciting ideas for her Halloween future. She mentions she wants to be a hybrid of something that’s somewhat feminine and something utterly ghoulish. Despite how much I love how un-sexist these concepts are, her choices, unfortunately, always seem to include either accessories that make her invisible to drivers or something only suitable for a tropical climate thousands of miles away from our reality.

Eventually, we come to a costume consensus and we begin to plan the evening’s festivities.

Indulging in my own childishness from my years of juvenile past, I orchestrate what I think will be the best route to optimize our fruitful night.

Whatever we decide, I know the weather has the final say. So I plan accordingly.

However, plans change: People don’t show up to our Halloween party, kids quickly become overly tired, haunted houses are spookier than we assumed. I just want my daughter to have the best Halloween possible, so, thinking about her happiness, I scramble to facilitate whatever fun is left to be had. Yet in this damage-control-induced craze, I don’t notice she is not only fine but has actually been having fun and has simultaneously, kindly, been thinking about me.

Despite my tendencies to over-plan and commandeer her best and spookiest memories ever, I realize that Halloween with my daughter is not about making it perfect; it’s about having a good time together in whatever shape, size, or form. Whether it’s hitting all the “good candy” houses or missing them completely because it snowed, it’s all about going with the flow and enjoying whatever Halloween throws at us together.