5 robots you should be keeping your eye on. For the sake of humanity. 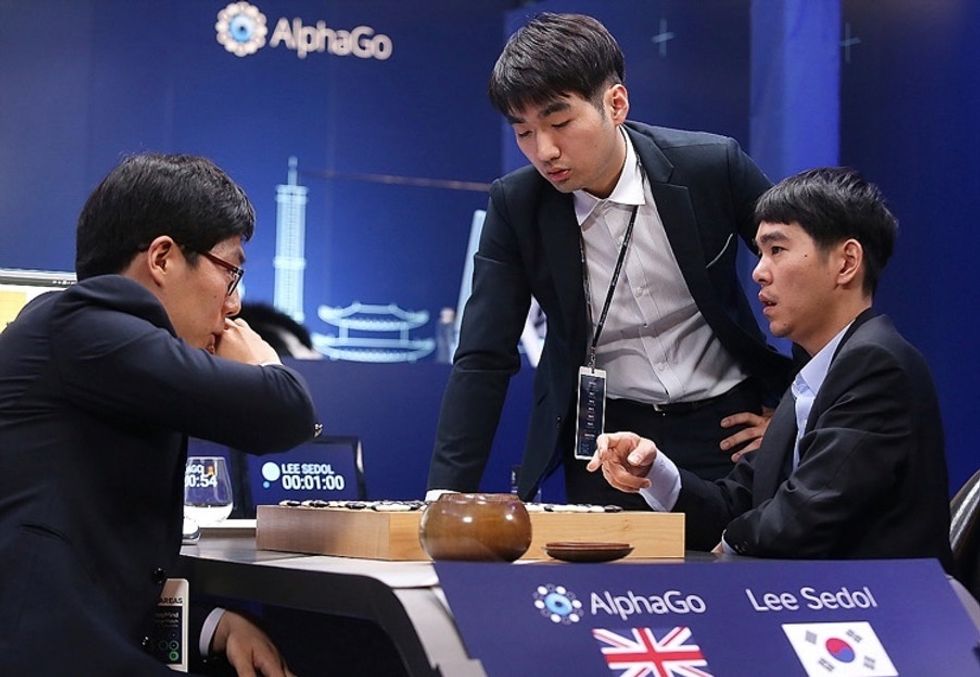 Every movie about a robot uprising has the same scene: You know, the one where someone explains that it didn't start out ALL bad.

It's usually followed by a flashback where we're shown that human technology was progressing, we were building better and smarter machines and sitting back to marvel at our technological advances.

Then, before anyone knew what hit them, humanity became slaves to our new robot overlords.

All of that is to say that if the robot uprising is on its way in reality, right now we're living in that flashback moment. Every week it seems like there's a new robot for us to marvel at while it secretly brings us closer to our final humanity-ending, robot-uprising misstep.

Here are five robots we should be keeping an eye on for the sake of humanity:

1. AlphaGo, an artificial intelligence program that can think

AlphaGo, created by Google DeepMind, is an AI program that's really good at playing the incredibly complicated ancient Chinese board game known as Go. So good, in fact, that it recently beat the game's world champion in a five-game match.

Go is considered so complex, and is so largely based on intuition and strategy, that it has long stood as a benchmark for testing the success of AI. In order to play Go, you need to do more than just calculate. You need to actually think. Not only can AlphaGo do that, it can apparently do so better than any human player.

If that doesn't scare you, take a look at Go champion Lee Sedol's face when he realized he was losing:

Go World Champion Lee Sedol, right. That's the face of a man who knows we have to start building underground bunkers immediately. Photo by Google via Getty Images.

2. The Domino's pizza delivery bot that can bring pizza from the oven to your front door

When Domino's pizza arrives at your door, the first thing out of your mouth is usually, "Good grief, what the hell is that terrifying monstrosity?" Pretty soon, though, you won't just be talking about the pizza.

The worldwide chain is now testing out a pizza delivery robot in New Zealand:

Think about it: The easiest way to overthrow humanity is by taking our jobs. Without jobs, humanity will stop learning valuable life skills, become lazy, and eventually none of us will want to be bothered with stopping the robot takeover! Mark my words, if this robot delivery system takes off, one day we'll be the topping on some post-apocalyptic robo-pizza.

3. Sophia, an eerily humanoid robot that can talk like a real person

Sophia is a humanoid robot created by Hanson Robotics. She made a big splash this year at the South by Southwest festival for her lifelike appearance and ability to fairly naturally converse with people.

Besides her creepy silicon skin, the terrifying thing about Sophia is that she represents how close we're getting to robots that are unrecognizable from humans.

What better way for robots to take over the world than by hiding among humans? How long will it be before you go on six dates with someone only to find out that they're actually a robot? How long before we accidentally elect a robot president? How long before our new robot president links up with the robots we've sent to the International Space Station with nuclear weapons and threatens to blow up the planet if we don't do its bidding? Does this remind anyone else uncomfortably of "Battlestar Galactica"?

WHY AM I THE ONLY ONE ASKING THESE QUESTIONS?

4. The Carl's Jr. burger-building robots that will definitely take minimum wage jobs away from people who need them.

When will we finally start paying attention to the warning signs here? Maybe when the robots are in control of our burgers.

That's what Andy Puzder, CEO of Carl's Jr., wants to do. His dream is a franchise location where customers never even have to interact with another human being.

"We could have a restaurant that's focused on all-natural products ... where you order on a kiosk, you pay with a credit or debit card, your order pops up, and you never see a person," Puzder told Business Insider.

Besides being a total dick-move that could potentially threaten millions of people's jobs, ordering a burger without ever having to look someone in the eye sounds OK, right?

WRONG! While you're busy pushing burger-buttons and forgetting how to talk to people, the robots are getting smarter. They're probably figuring out how to extract the natural oils from human beings in order to lubricate the industrial machinery in their factories. Or something like that.

They're building better, smarter robots while you're yelling at a kiosk that forgot to include extra ketchup! WAKE UP, SHEEPLE!

A collaboration between Massey University's School of Engineering and Advanced Technology and the National Centre for Precision Agriculture has produced a robot that can farm.

"Oh that's not so scary," you might be thinking.

But did you consider this? Farming is literally how human civilization started! When robots learn agriculture and can settle down into their own communities ... GAME OVER, MAN.

And I know you're thinking "but robots don't need food" and "that robot only inspects crops it doesn't grow them," but the terror remains in my heart. Deep in my warm-blooded biological heart.

The end is nigh, folks. Robots are here, and they're getting better and better over time.

The truth is, all these robots are incredible technological advancements in our everyday lives.

Sure, maybe we're signing our own death certificates and will one day look back at these robots with sad, tired, eternally-enslaved eyes.

Sure, maybe one day we'll have to send a time-traveler back to 2016 in order to stop the creation of these robots and ensure the peace and prosperity of the human race.

But, for now, it's pretty cool to admire the science and technology behind all of it, as we manifest our own dystopian destiny.