17 badass photos to remind you there's nothing women can't do.

A woman's place is wherever she wants to be. 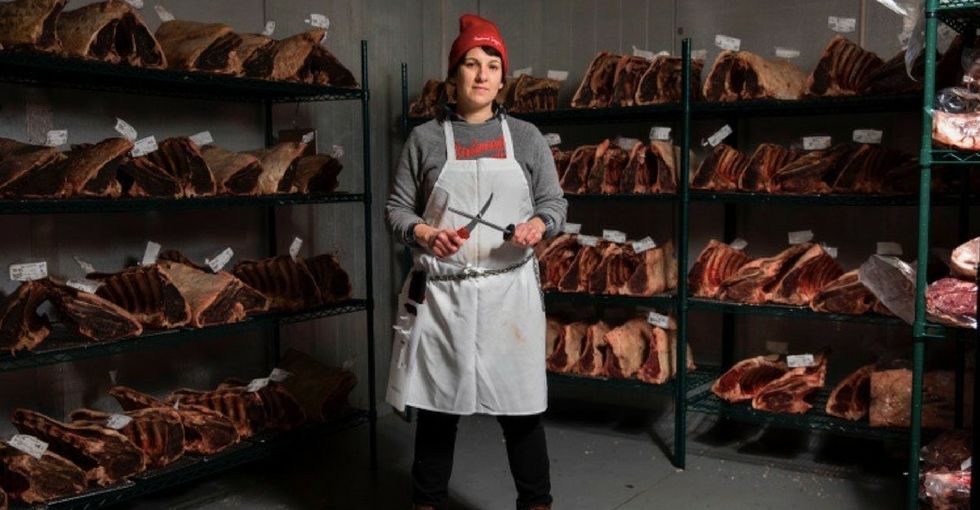 Who run the world? Girls.

Well, girls and the badass women they become.

In a beautiful photo series, photographers from around the world captured women in typically male-dominated professions.

On top of expertly wielding intense machinery, weapons, tools, and more, these women shoulder the burden of sexism, wage gaps, and lowered expectations.

Does it stop them? Hell, no. But that doesn't mean it's easy.

Here are 17 women serving major career inspo as they kick ass, take names, and bring home the bacon in professions they're passionate about.

GIF via The Golden Globe Awards.

1. Think your colleagues are tough? Lea Vincens is a mounted bullfighter in Huelva, Spain.

2. When Heather Marold Thomason isn't slicing and dicing, she's running things behind the scenes of her own butcher shop in Lansdowne, Pennsylvania.

3. Woman, a plan, a canal = Panama. ... OK, that near-palindrome doesn't quite work, but Eyda Rios, operator of the Panama Canal's Pedro Miguel Locks, sure does.

4. First responder Samra Akram Zia is ready to roll with her motorcycle ambulance in Lahore, Pakistan.

5. Huda Salem, a member of Iraq's National Weightlifting Team, is strong in every sense of the word as she hits the gym in Baghdad.

8. Need a lift in Allahabad? Let Tabassum Bano give you a ride in her auto rickshaw.

9. Cristal dominates the ring as a professional wrestler in Mexico City, Mexico.

10. Hannah Beachler is the sought-after production designer behind the fictional nation Wakanda in "Black Panther."

11. Think you can keep up with South African mixed-martial artist Shana Power? No. No, you can't.

12. In case you didn't get the memo, women are gamers too. Jodie Azhar of the U.K. is the lead technical artist for the series "Total War."

13. Sound the alarm! Firefighter Ran Namise of Tokyo is putting in work as part of the command squad for the Kojimachi Fire Station.

14. For 11 years, Ana Sousa has taken to the skies as a pilot for TAP Air Portugal. That's not peanuts.

15. Michelle Whye saws through gender norms as a volunteer for the New South Wales state emergency services in Sydney, Australia.

16. When you're ready to step up from IKEA furniture, carpenter Asmaa Megahed can build and repair whatever you need in her Cairo workshop.

17. Kathryn Sargent is the first woman master tailor on London's famed Savile Row, a street that's been known for men's tailoring for more than 200 years.

While these women have the opportunity to live their dreams and find fulfilling work, many women will never get that opportunity.

According to some estimates, more than 131 million girls worldwide are out of school. These girls are left behind for a host of reasons. Some are intentionally excluded because of their gender, because they live in war-torn countries, because their family can't afford to send them to school, or because they've been pushed into child labor or marriage.

Regardless of the reason, their lack of educational opportunities limits their personal financial freedom and the economic development of their communities and country.

As we celebrate the women running the world, it's important to remember the ones left behind. There are doctors, engineers, teachers, writers, and dreamers waiting for their shot too. We can all do more to get them there, like volunteer with, donate to, and signal-boost the organizations around the world getting it done.