Meet the kids and get the backstory of the Scripps National Spelling Bee. 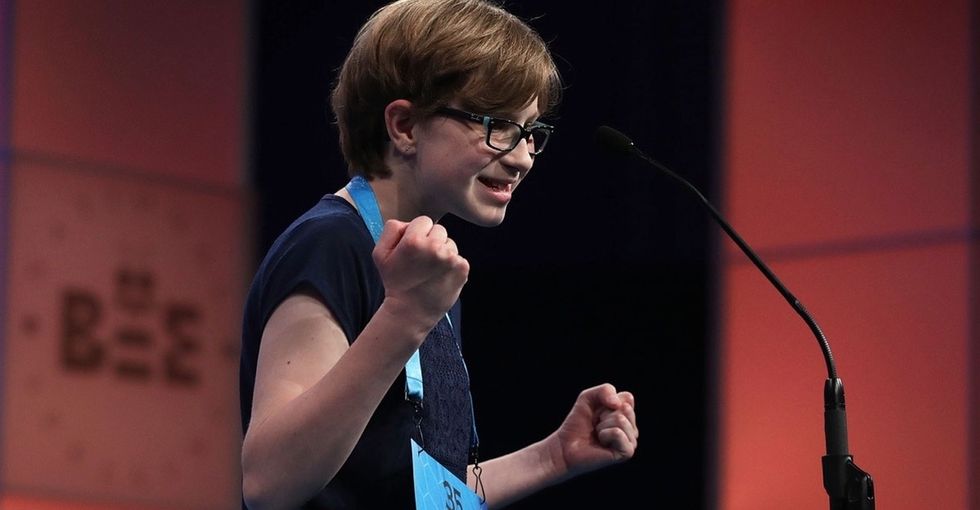 The 2016 National Scripps Spelling Bee is underway in Washington, D.C.

The annual event brings the country's strongest spellers (or at least those who haven't graduated the eighth grade) together for four days of feats of academic super-strength.

The days are long. It's stressful. And while the competitors love the challenge, it's not for the faint of heart.

All photos by Alex Wong/Getty Images.

But this event is much bigger than the small school spelling bees you may be familiar with.

Here are 15 facts about the National Spelling Bee you may not know.

4. Spellers at the bee take a preliminary test before the oral rounds begin.

To get past the preliminaries, the spellers have to earn at least 27 of 30 points on a vocabulary test. Needless to say, it's really tough. You can take it for yourself and see how you score.

5. 29 of the spellers this year have family members who've competed in the bee before.

Two of the spellers have siblings who've won the whole thing.

6. 66% of the spellers attend public school.

7. Speller Zander Reed of Ames, Iowa, is competing in the bee for the fourth time!

This is Zander back in 2013, when he could barely reach the microphone:

8. The youngest speller in the competition this year is Akash Vukoti, a 6-year-old first-grader from San Angelo, Texas.

He was on the "Steve Harvey Show" in March.

(Author's note: My computer doesn't recognize this as a word, but young Vanya Shivashankar from Olathe, Kansas, spelled it correctly to take home the title.)

10. If spellers miss a word — and most of them will — there's a crying couch.

It's away from the stage, and spellers can reflect with their families for a while.

11. National Spelling Bee champions are an elite group, with only 93 winners in the history of the event. There have been 48 girls and 45 boys.

12. Paige Kimble, the executive director of the event, is a former champion.

Kimble chats with a young speller at a press conference in 2012.

13. The bee's announcer, Jacques Bailly, is a former winner too. He reached out to Scripps to ask about a position, and they happened to have a need.

It's an American term, found in print in 1875, but scholars suggest it was probably around before then. It could be related to the busy, industrious nature of the insect and the way they work in teams, but no one knows for sure.

The spelling bee is an iconic celebration of language and literacy.

Whenever we can cheer kids on for pursuing the interesting and mind-expanding hobbies they love, we should. Keep it up, kids! You're all amazing!