11 facts about women-run businesses that prove the future really is female. 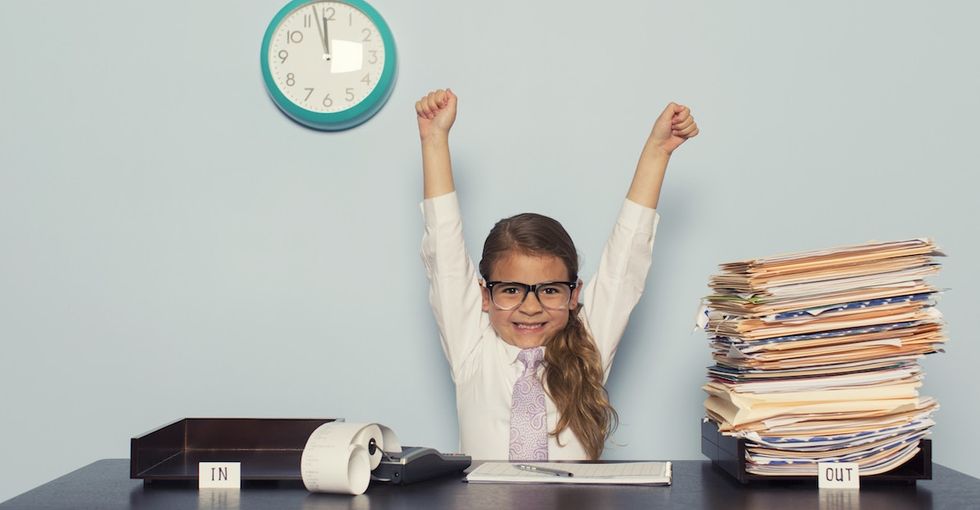 The New York Times made headlines a few years ago with a shocking statistic: Among CEOs of big U.S. companies, there were more men named John than there were women ... period.

In 2017, female executives are still rare — too rare. Though we like to think we've come a long way since "Mad Men"-era sexism in the workplace, studies like these remind us that in many ways, the glass ceiling is still firmly in place for female business owners and executives. And it's not just the Fortune 500 that has an equality problem; companies of every size still suffer a serious lack of female leadership. Among corporations and small businesses alike, women make up just a small percentage of executives and owners. But increasingly, women who've experienced professional roadblocks in the corporate world are leaving to do things their way, by starting businesses of their own.

Danielle Vogel is one woman who’s helping to break the glass ceiling of small business.

She knows just how many obstacles women encounter in businesses of every size because she's encountered them all herself. Vogel left behind a 10-year career on Capitol Hill and put everything she had into her entrepreneurial pursuits — and it paid off. Today she's the sole owner of Glen's Garden Market, a locally-sourced independent grocery store.

We headed down to the market to talk to her firsthand about life as a female entrepreneur:

People are constantly surprised that this grocery is run by a woman. Female business leaders being treated as equals is long overdue.

Even after achieving success, Vogel still encounters people who can't comprehend that she's the full-time CEO of an independent grocery store that employs 95 people.

Why? "Because it's an extremely atypical thing for a woman to do," she says.

The good news is that women like Vogel are helping pave the way for many more women to own and run businesses. Here are 11 encouraging signs that the future — of business, anyway — really is female.

1. Business isn't a boys' club anymore — and young female entrepreneurs are succeeding because of it.

One reason men have historically had more small-business success is that they could tap into an existing network of other male entrepreneurs. Thankfully, the balance is beginning to shift: There are now more than 9.9 million firms in the United States owned by women.

2. Today's female entrepreneurs have access to a growing population of mentors.

When it comes to mentoring women, men may exhibit "Reluctant Male Syndrome" — an amalgam of implicit biases that prevent them from forming professional relationships with the opposite sex. Now that we're seeing an increase in female leadership, we're also seeing an increase in young women who benefit from it.

Vogel is already contributing to the effort. “We’ve launched 65 local food businesses,” she says in the video. “35 are owned by women.”

According to Womenable’s 2016 “State of Women-Owned Businesses in the U.S.” report, the number of women-owned firms has increased by 45% since 2007, while the overall national increase remained at just 9%.

4. And, internationally, women make up approximately one-third of all entrepreneurs worldwide.

5. African-American women have become the fastest-growing group of entrepreneurs in the United States.

During that same time period, the number of jobs at companies not owned by women actually shrank.

7. Nearly 7.9 million people are employed by U.S. businesses that are owned by women.

Just one of many benefits that we all enjoy when more women are given the space to succeed in business.

8. Women entrepreneurs in the U.S. rank their own happiness at nearly three times that of women who are not entrepreneurs or business owners.

Any path a woman chooses can be rewarding — be it family life, a traditional career, or something else altogether. But with business ownership looking increasingly appealing, we can expect that more women will choose an entrepreneurial path.

That's an astronomical number compared to the Fortune 500, where only 4% of CEOs are women.

10. Women are better at writing crowdsourcing campaigns — and they raise more money because of it.

In traditional face-to-face fundraising scenarios, women have a much more difficult time getting investors than men do — and that's been a major obstacle to entrepreneurship for women. The arrival of platforms like Kickstarter and Indiegogo has cleared the way for some businesses that otherwise might not have gotten off the ground.

11. Women start companies with an average of 50% less capital than men do. So some cities and states are sponsoring resources to provide women with more access to investment capital.

Nashville, Chattanooga, and Memphis, Tennessee, appear at the top of WalletHub's list of friendliest cities for female entrepreneurs, thanks in part to the large number of resources they make available to them. But they're not alone — lots of cities in the U.S. offer entrepreneurship grants and programs for women, and some even have dedicated business centers for women to work and network.

All around the world, more and more smart businesspeople are investing in female entrepreneurs.

There are now grants, programs, and accelerators dedicated to helping women access resources that historically were only available to men.

Many of those programs are supported by female CEOs, like Vogel, who feel strongly that it's important to help other women reach the success that they've had themselves. And that's great news for everyone else: With all of the jobs, revenue, and innovation that women bring to the corporate sphere, everyone benefits from a world with more women at the helm.

Paige is a 6-year-old skateboarding wonder from Australia. A recent video of her dropping into a 12-foot bowl on her has gone viral, both for the feat itself and for the style with which she does it. Decked out in a pink party dress, a leopard-print helmet, and rainbow socks, she looks nothing like you'd expect a skater dropping into a 12-foot bowl to look. And yet, here she is, blowing people's minds all over the place.

For those who may not fully appreciate the impressiveness of this feat, here's some perspective. My adrenaline junkie brother, who has been skateboarding since childhood and who races down rugged mountain faces on a bike for fun, shared this video and commented, "If I dropped in to a bowl twice as deep as my age it would be my first and last time doing so...this fearless kid has a bright future!"

It's scarier than it looks, and it looks pretty darn scary.

Paige doesn't always dress like a princess when she skates, not that it matters. Her talent and skill with the board are what gets people's attention. (The rainbow socks are kind of her signature, however.)

Her Instagram feed is filled with photos and videos of her skateboarding and surfing, and the body coordination she's gained at such a young age is truly something.

Here she was at three years old:

And here she is at age four:

Paige clearly enjoys skating and has high ambitions in the skating world. "I want to go to the Olympics, and I want to be a pro skater," she told Power of Positivity when she was five. She already seems to be well on her way toward that goal.

How did she get so good? Well, Paige's mom gave her a skateboard when she wasn't even preschool age yet, and she loved it. Her mom got her lessons, and she's spent the past three years skating almost daily. She practices at local skate parks and competes in local competitions.

She also naturally has her fair share of spills, some of which you can see on her Instagram channel. Falling is part of the sport—you can't learn if you don't fall. Conquering the fear of falling is the key, and the thing that's hardest for most people to get over.

Perhaps Paige started too young to let fear override her desire to skate. Perhaps she's been taught to manage her fears, or maybe she's just naturally less afraid than other people. Or maybe there's something magical about the rainbow socks. Whatever it is, it's clear that this girl doesn't let fear get in the way of her doing what she wants to do. An admirable quality in anyone, but particularly striking to see in someone so young.

Way to go, Paige. Your perseverance and courage are inspiring, as is your unique fashion sense. Can't wait to see what you do next.