This university's transgender bathroom signs are on point. 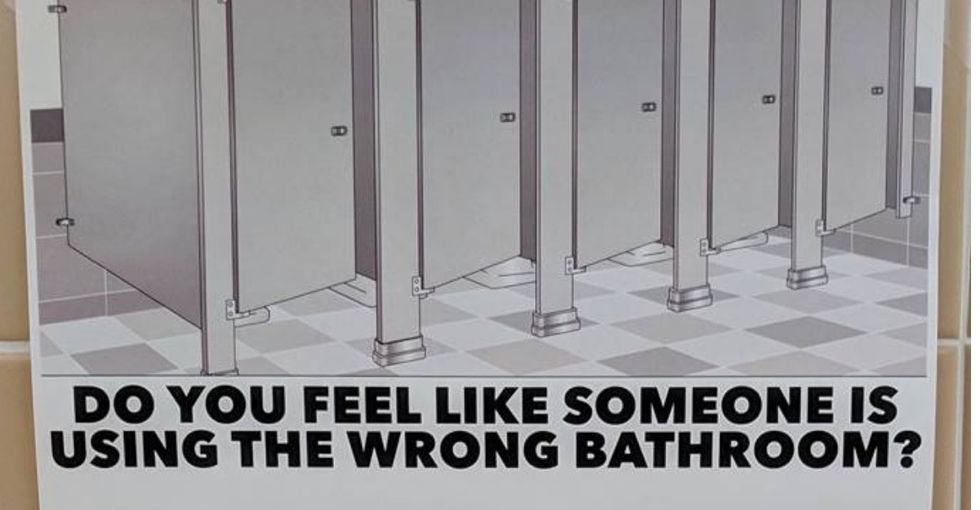 With greater visibility and acceptance in society, LGBTQ+ communities have also faced greater scrutiny in certain areas, including where it's appropriate for people who are transgender to relieve themselves.

Most of us have been using bathrooms with transgender folks for our entire lives; we just haven't been aware of it. But thanks to widely publicized anti-trans "bathroom bills" that attempt to require people to use the bathroom designated for the genitalia they had at birth, the issue of who goes where has become a much bigger thing than it needs to be.

But signs at Michigan Technological University bring us back to the basics of decency, respect, and privacy, which is all any of us really want in our public peeing experiences.

The simplicity of the instructions highlight why the transgender bathroom debates are rather silly.

So much of the fuss over transgender people and bathroom use comes down to basic human decency.

First of all, it's incredibly rude to assume anything about anyone's genitalia, especially in a public restroom. I mean, really.

Secondly, some women can have a masculine appearance. Some men are quite feminine. That may be because they're transgender, or it may not be. There is zero way to know unless you want to cross some very clear boundary lines that no one has the right to cross.

Third, it's really no one's business what a stranger has in their pants unless they're doing something inappropriate, which would be a problem in a public restroom no matter what your gender or gender expression.

That's why these signs from MTU's Center for Diversity and Inclusion emphasize treating everyone in the bathroom with respect and dignity and then moving right along.

"DO YOU FEEL LIKE SOMEONE IS USING THE WRONG BATHROOM?

X Stare at them

> Carry on with your day

Transgender and non-binary students—You have the right to be here:

We're all simply using the facilities we feel safe in. Please don't take this right away from anyone."

So simple, and yet so hard for some people to grasp.

But what about pedophiles? Yeah, no.

But people still ask questions such as "What's to stop a pedophile man from using a women's bathroom and preying on girls if people can choose the bathroom they use?" That may sound logical to some, but the scenario doesn't make sense when you think about the way many transgender people physically present.

If someone has physically transitioned so that their body matches their gender, you often can't even tell that they're transgender. By forcing people to use the bathroom that matches their biological sex at birth, you'd beforcing transitioned men to use women's bathrooms (and vice versa). These are men with beards and pectoral muscles and broad shoulders—men you wouldn't be able to differentiate from non-transgender men. See the problem? If transitioned men have to use women's bathrooms, then any man easily could—without even going through the hassle of dressing like woman. Therefore, anti-trans bathroom laws would do exactly nothing to make it harder for male pedophiles to use a women's bathroom.

But the pedophile argument is a scapegoat anyway, and a rather offensive one at that. The truth is that pedophiles have plenty of ways to prey on kids without using public restrooms, and that issue is entirely separate from where transgender folks go to the bathroom. As the sign from MTU points out, all people who are transgender want is to use the bathroom where they feel safest, and they have the right to pee in peace just like everyone else.

It would be great if everyone just used the basic public restroom etiquette that's always been there: mind your business, keep your eyes to yourself, and wash your hands when you're done. It's really that simple.