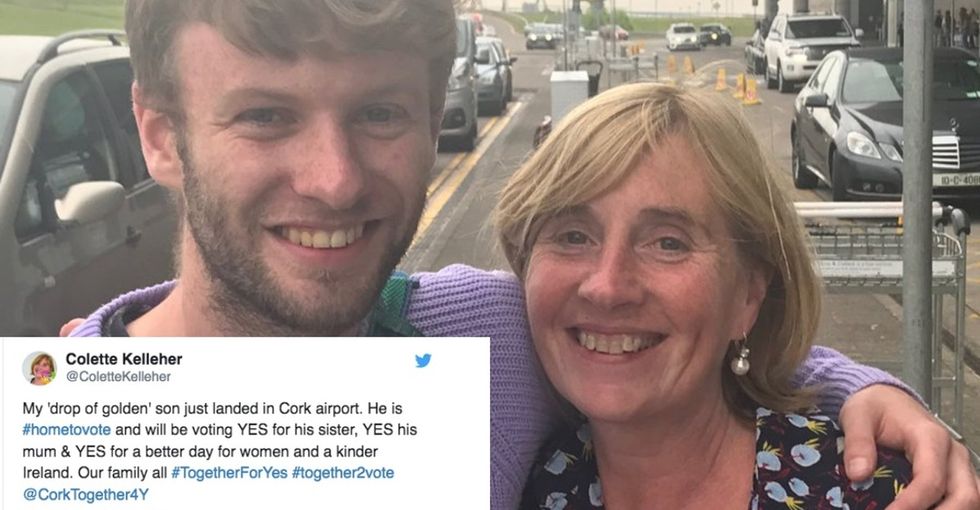 People are flying home to Ireland for a truly remarkable reason.

On May 25, 2018, Ireland is voting on whether or not to repeal its ban on abortion. According to recent reports, it looks like the repeal is likely to happen, in large part thanks to some incredibly engaged — and nomadic — citizens.

Irish citizens from around the world are sharing adorable photos online of them flying home to vote for their country to legalize abortion.

Banding together using the hashtag #HomeToVote, people are sharing scenes of their support.

Their posts have gone insanely viral, showing the world just how important a woman's right to choose is to their country. And people are sincerely moved by their actions.

Like this person, whose friend was helped by a stranger just to make it home to vote.

a friend of mine wasn’t allowed fly from Manchester as she forgot her passport. random stranger in the airport tran… https://t.co/kFsHXZ2mxQ
— angela merky (@angela merky)1527199341.0

And these friends, who joined alliances with the airport security.

And this hilarious Twitter user, who knows just how import social reform is to Irish voters.

This person shared a video of what's happening at arrivals gates.

Whenever I get gloomy with the state of the world, I think about the Arrivals Gate at Dublin airport #hometovote https://t.co/1eOMpNGvXT
— Nic Murray (@Nic Murray)1527189174.0

And this woman, who went to the airport just to see it all.

I went to Dublin Airport to bear witness to this amazing movement and I could.not.cope. #hometovote https://t.co/NBZQewsfAe
— Jane Horgan-Jones (@Jane Horgan-Jones)1527193767.0

And so. Many. Others.

🇮🇪🇮🇪🇮🇪THERE IS A LADY AT DUBLIN AIRPORT HANDING OUT BAGS OF TAYTO TO ALL THE ONES COMING #HOMETOVOTE 🇮🇪🇮🇪🇮🇪 🇮🇪🇮🇪🇮🇪… https://t.co/xNNmwAQp3r
— Daniel Gay Luas (@Daniel Gay Luas)1527203128.0

My 'drop of golden' son just landed in Cork airport. He is #hometovote and will be voting YES for his sister, YES h… https://t.co/QCjDFaa3kg
— Colette Kelleher (@Colette Kelleher)1527181283.0

Massive queues on arrival at Dublin airport. Ireland's children have been awakened and they answer her call home… https://t.co/ra0NeWpjV3
— Mark McCormack (@Mark McCormack)1527188656.0

It's clear Irish citizens understand just how important this vote is.

According to Leo Varadkar, Ireland's taoiseach, the referendum is a "once in a generation decision." Should the proposal to repeal the constitutional clause be defeated, it could be at least 35 years before voters get another say on the matter.

The vote is just one of many recent attempts to move Ireland toward being a more progressive society for all.

The country recently legalized same-sex marriage as well as marijuana for certain medical conditions. Repealing the abortion ban, which goes back to 1983, would be another marvelous, needed step towards human rights and dignity for all Irish citizens.

Margaret Mead once said, "Never doubt that a small group of thoughtful, committed citizens can change the world; indeed, it's the only thing that ever has."

Judging by these engaged civic leaders and citizens, it's safe to say they're well on their way.