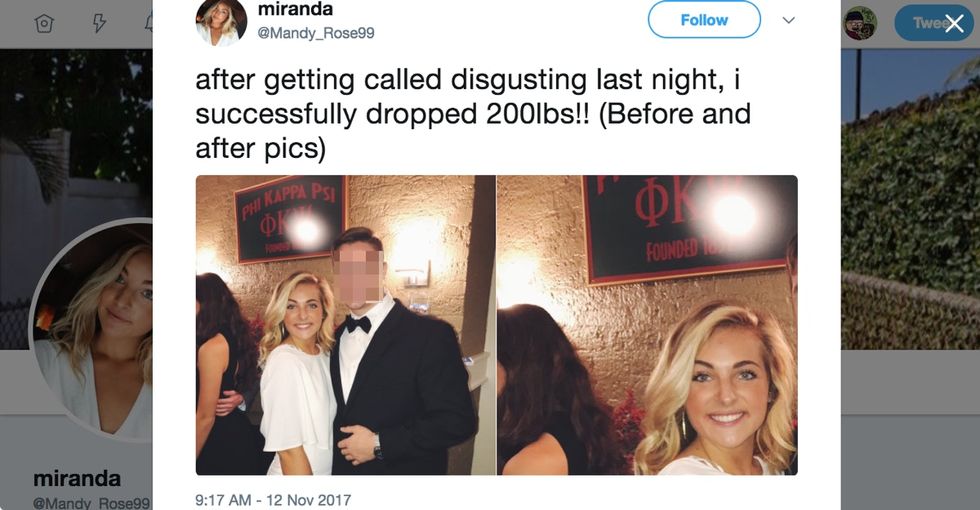 As she tells it, after Miranda Baker's boyfriend called her "disgusting and unattractive," she decided it was time to lose some weight — about 200 very specific pounds of it. On Nov. 12, the 18-year-old Iowa State University student tweeted, "After getting called disgusting last night, I successfully dropped 200lbs!! (Before and after pics)."

The before picture showed the couple together. The after was the same photo, with him cropped out of it. 🔥🔥🔥

Life's just too short to spend with people who don't value you for who you are.

"The way you were acting today was disgusting and unattractive," Baker quotes her (now ex) boyfriend as telling her after they spent the day together at a tailgate. That's when she says she bounced, deciding that her time was better spent with her friends than with a guy who'd say something like that to her.

It almost goes without saying, but losing weight doesn't necessarily mean getting healthier, and generally we roll our eyes at weight loss as any sort of relationship advice (#AllBodiesAreGoodBodies). But when it comes to losing 200 pounds the way Baker did, that's a special exception; dropping a person who treats you like garbage is by far the healthiest way to lose weight.

Find someone who likes you for you, for all your flaws and quirks. If they can't do that, they should hit the road.

This article was originally published on November 14, 2017.