This sneaky guide dog is too pure for this world. A hilarious video proves it. 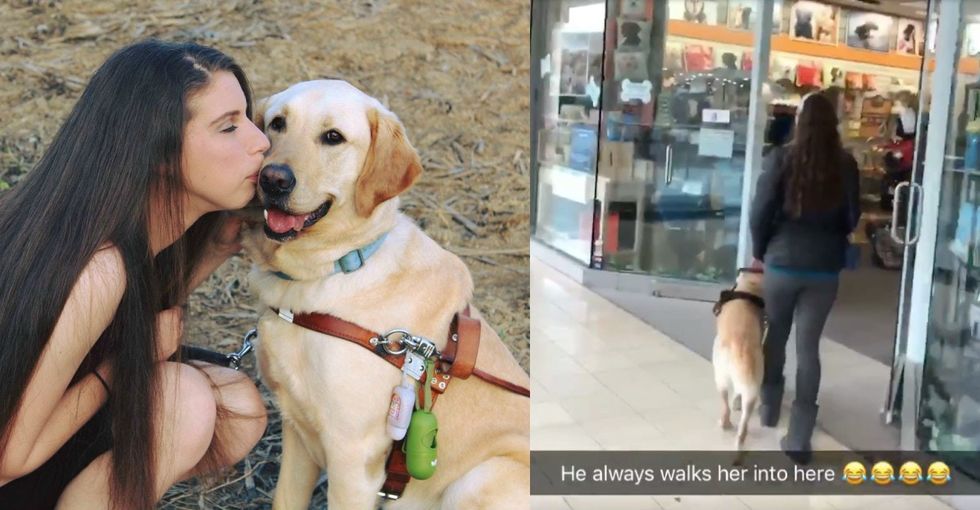 Imagine you're a guide dog: You're a dog with a job.  You love your human, and you want to keep them safe and healthy. So you're working all day.

You'd need a break, a few moments that are just about you, right?

And one dog's going hilariously viral for the sneaky way he's guiding his human into his plan for treating himself. Internet, meet Danielle Sykora (human) and Thai, the goodest and craftiest Labrador/golden retriever that's done ever retrieved. (Of course, they're all good dogs, Brent.)

After that caption, you may be asking yourself, "'Mad loyal to her otherwise?' What does that even mean?" And it's a good question — without context, the dog in that photo looks like he would never betray his human and that he could do anything he sets his mind to. He wants to fly a plane? I'd get a first-class ticket for the ride. He wants to be president? I'd vote for him. Thai wants to run the world? Beyoncé might consider allowing it. How could anyone say no to that face?

Thai's sneaky, "disloyal" behavior is so wholesome, so pure, it's about to make your whole day.

Here's the story: BuzzFeed reports that when Danielle, a college student, comes home for the weekend, she likes to go to the mall with her dad, her sister Michele, and Thai. The last time they all went shopping, Michele's dad told her to tread carefully because he was fairly certain Thai was about to walk Danielle past every other store and right into his favorite shop: a wonderland of dog toys, treats, and fine home decor aptly called Cool Dog Gear.

How did Danielle's dad know? Thai had happily done it before.

Because we live in a world where "video or it didn't happen" is the battle cry of the internet, Michele got it recorded.

My sisters guide dog always sneakily walks her into this store without her knowing 😂😍 I love dogs, man https://t.co/UuE9wDN4md
— Michele Sykora (@Michele Sykora)1524184870.0

First: Have you ever considered comic sans is probably the font that dogs think in? That sign wasn't meant for humans; it was meant for dogs. Who else would be taken in by the store name Cool Dog Gear but a retriever? (What I'm saying here is that I think dogs can read.)

Thai was handsomely rewarded for his subterfuge. According to Michele, with whom I connected on Twitter, whenever the pupper heads to Cool Dog Gear's treat bar, he's rewarded with a hard-earned snack. (He's done it about six times at the time of this story.)

Of course, Thai is an incredible guide dog.

Danielle told BuzzFeed that Thai is smart and full of energy. Of course, he's also a little "mischievous." According to her, Thai jumped on top of a cake only a week after he came to live with her. Yet he always keeps Danielle safe, her sister tells me.

"He has never ever put her in any type of harm," Michele says. "He is so smart. He just really likes taking her to places that have good food smells."

Isn't that all we're looking for in a friend — someone to share good food smells with? Danielle said she'd much rather have an impish guide dog, one who will take her to Starbucks because he knows she likes it (and he gets a puppuccino, of course), than one who's always perfectly behaved.

One thing's for certain, the internet loOOOoves Thai (that was my impression of a doggie howl).

After Michele's tweet went viral, people from all over chimed in with praise and their own adorable stories of service animals going just a tiny bit rogue.

If there's one lesson Thai teaches us, it's to always act like you belong.

@michelesykora He did it so carefully and wagging that tail. And then that determined look on his face as they ente… https://t.co/2KAe3eyumQ
— Billie Rich (@Billie Rich)1524512341.0

Congratulations, Thai! You've gotten a treat, made the world a better place, and even started important conversations in the Twitter comments about how people living with disabilities use social media. That deserves another trip to the mall.

You know what? Thai may even be giving this golden — who's been my favorite for years — a run for his money.

I shared this video with Michele over DM, by the way. Her response? "That is exactly what Thai would have done."