Why this Olympic swimmer gave his dad the middle finger before every race. 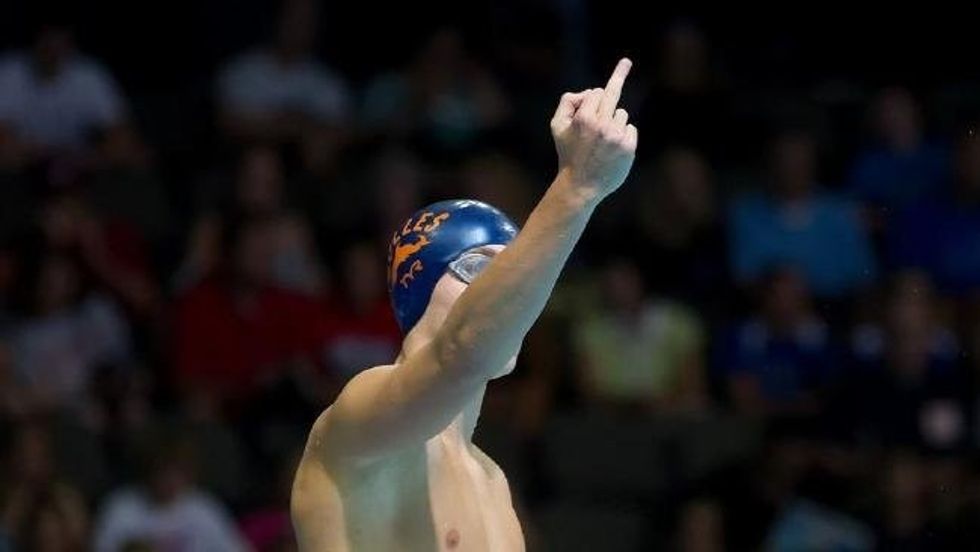 Santo Condorelli isn’t a bad kid. But every time he prepares to dive into another competitive swimming race, he takes a moment to stop and gives his dear Dad the middle finger.

And his Dad returns the favor, flipping off his beloved son before the race begins.

See, the 21-year-old used to have a ton of anxiety about competing against fellow swimmers. That’s when his father Joseph suggested flipping him the bird as a way of relieving tension before a big race.

"[He said] 'You've got to build your confidence yourself and say eff everybody else that you're racing," Santo, who is gearing up to swim for Canada at the Rio Olympics, told the CBC. "He said 'Every time you're behind the blocks, give me the finger and I'll give it back to you."'

However, the confidence inspiring gesture has not been without controversy. That’s because audience members, judges, and of course viewers at home, often mistakenly think the young swimming phenom is flipping them off.

"I was looking at my father and I gave him the finger . . . directing it right at the camera," he recalls.

But for now, he’s going to stick the method that’s working so well for him. Though he’s tried adjusting his finger guns ever so slightly so as to not offend delicate eyes watching at home.

And it certainly doesn't seem to hurt. During the 2016 Summer Olympic Games, he placed fourth in the 100m freestyle, missing a bronze medal by a mere .03 seconds.