Why this man went from food stamp ineligible to one of their biggest supporters. 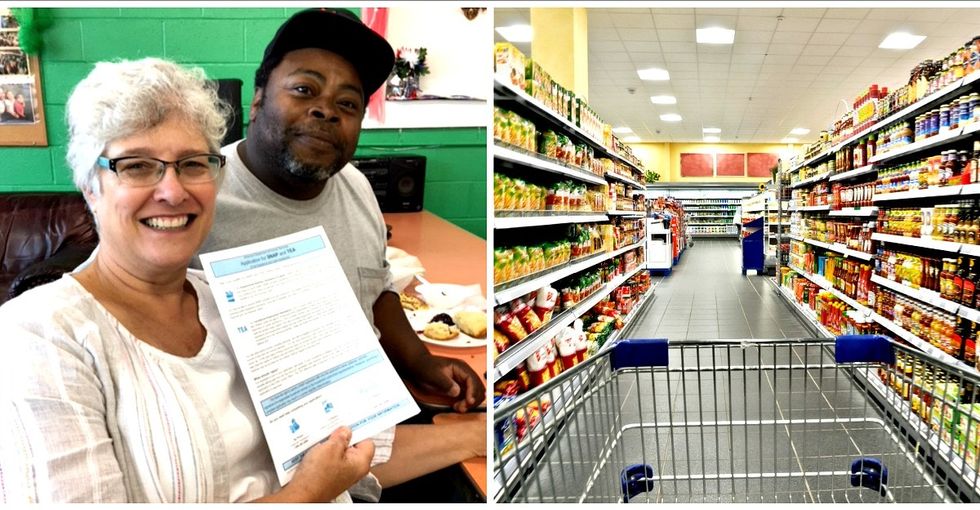 But for him, a 50 year-old Arkansas native, his second chance has been a long time coming.

In 2003, after serving a six-and-a-half year sentence for a drug felony charge, Orlando returned to his hometown of Benton, Arkansas, determined to make some big changes.

“I admit that what I did was wrong — I’m not going to sugar-coat it,” he says “But once I got home — right is right.”

He soon learned, though, that the road to re-entry would be a bumpy one.

There are a number of challenges that formerly incarcerated individuals can face when they return home from prison.

Many deal with the stigma of having served time. Some are still struggling with addiction or mental illness, which they may have had before they went to prison. And others, like Orlando, live in states that — up until recently — held public policy restrictions that limited the kind of help a person with a drug felony charge could receive.

Arkansas was one of those states.

At the time of Orlando’s release, the Arkansas state legislature observed a ban from President Clinton’s 1996 overhaul to the welfare program, known as PRWORA, or the Personal Responsibility and Work Opportunity Act. In this ban, directly related to the “war on drugs,” PRWORA imposed a denial of federal benefits to people convicted in state or federal courts of felony drug offenses. This meant that individuals like Orlando who were otherwise eligible for federal benefits like The Supplemental Nutrition Assistance Program (colloquially known as food stamps) were instead denied for life.

“You couldn’t vote again, you couldn’t get food stamps,” remembers Orlando of that time.

The difficulty of that time took a toll on his personal life too. “My son’s mother, we split up,” he says.

Making matters worse, Orlando was unable to work due to a disability.

So to make ends meet, he sought out help from local community centers, food banks, and outreach programs. But he still lived with food insecurity, just like 41.2 million Americans do every day.

Most of the time, he says, his fridge would be completely empty.

Orlando managed to survive for years without a safety net. But when he saw the opportunity for a second chance, he jumped on it.

In the years he spent at local food banks, Orlando would frequently run into Lynn Sudderth, a food stamp outreach field manager from the Arkansas Hunger Relief Alliance.

This organization works on the local level to advocate for people struggling with food insecurity, by organizing food banks and helping those eligible to sign up for food stamp benefits.

One day while Lynn was running an outreach session at a community center, Orlando expressed to Lynn his frustrations with the ban. He wanted to do anything he could to help, even offering to tell his story to anyone who could be influential in helping to lift it.

“Every time I saw him, he asked if it had changed, and we would sit and chat,” says Lynn. “I told him at one point that I was hopeful, and if the ban was lifted, I would personally come down to take his application.”

On August 1, 2017 — 15 years after his release —the state of Arkansas voted to lift the ban entirely.

Finally, it was possible for Orlando to access the benefits he needed to get back on his feet and stop living with food insecurity.

“The week we were able to start taking applications, I surprised Orlando at the Care Center breakfast and signed him up," says Lynn.

"We had to take a picture to celebrate."

So far, Orlando says it’s had a big impact on his life.

As for groceries, Orlando receives a monthly benefit of $130, which he uses to buy packages of chicken and ground beef to cook full meals. “It feels real good to put food in my fridge, I promise you that,” he says. “For people who can’t afford their food, to get warm food... it’s just a big blessing.”

And just this past April, he secured his own place to live for the first time in a very long time.

“With the extra money ... to pay for groceries, I have more money to pay my bills — the basic bills like lights and gas. It’s a huge help” he says.

After seeing the positive change these benefits brought to his own life, Orlando has made it his mission to help others like him in the community through volunteering and outreach.

“I see people in a similar situation, and they need to get that help too,” he says.

He volunteers his time at a local Christian community center, traveling to food banks to help bring back healthy options for the center’s food pantry. He participates in the center’s cooking classes, and sees himself as a role model, especially for the younger generations struggling to “get to the next level.”

“We really need to grab the young ones and say ‘Look, I got you’,” he explains. “ I can talk to them, say, ‘look, it can happen. It can be done.’ Help find them a job. You just need a little help to get back on your feet.”

He believes there’s no shame in asking for a little help, and he’s hopeful others living with a former drug felony charge won’t have to struggle with food insecurity for as long as he did.

Orlando’s hope for the future also may not be far off.

Other states have recently taken similar measures to Arkansas, either modifying the ban or lifting it entirely. According to the most recent state options report, only seven states maintain the ban in full, and that number looks to be changing. A bill lifting the ban just cleared the Indiana Senate earlier this year.

Soon, second chances may not be nearly as hard to come by.

And Orlando couldn’t have set a better example for why second chances are so important. In reaching out to his community, inspiring others, and getting back on his own feet, Orlando makes a case for every American having greater access to healthy and sustaining food options — regardless of their past.

As for the future, Orlando is optimistic. “My son is 21 now, he’s doing great, and going to go to college. I see the good things now.”