It's easy to feel let down by the world, but don't give up all hope. 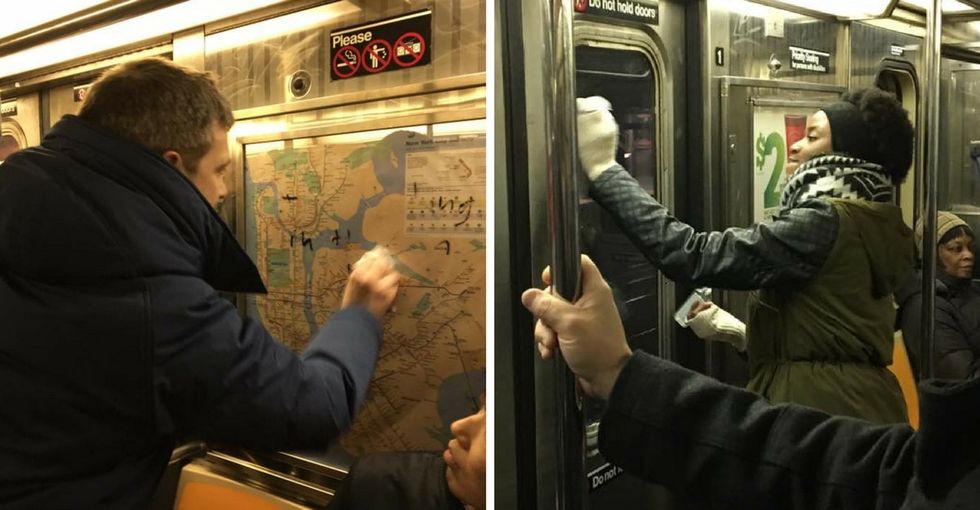 Onboard a subway car, New York-based lawyer Gregory Locke and his fellow passengers stood in uncomfortable silence as they took in their surroundings.

Swastikas and hateful messages were scrawled on the car's windows and advertisements in every direction. Messages like "Jews belong in the oven," "Destroy Islam," and "Heil Hitler" covered the walls. As Locke and his fellow passengers contemplated what to do next, a local chef named Jared Nied offered a suggestion.

Immediately, the car's passengers rifled through their bags in search of hand sanitizer and tissues. Recounting the incident on Facebook post, Locke estimated that within just two minutes, the hateful symbols and words had been erased from existence.

I got on the subway in Manhattan tonight and found a Swastika on every advertisement and every window. The train was...

In the wake of a contentious election season that saw the rise of white nationalists, neo-Nazis, and other members of the so-called "alt-right," it's easy to lose faith in the overall goodness of people.

In another incident reported in November, a New York subway car was defaced with racist and homophobic slurs. "White power," read one of the messages on the 1 train. According to the NYPD, instances of vandalism that included swastikas jumped by more than 500% in 2016 over the previous year. Additionally, hate crimes have seen a recent boost since Election Day.

Beastie Boys member Adam Horovitz speaks at a anti-hate rally at a Brooklyn park after it was defaced with swastikas in November 2016. Photo by Spencer Platt/Getty Images.

But incidents like the one Locke posted to his Facebook page show that while the world has its share of bad people with hateful ideologies — there are always good people who are willing to set things right.

It's a sentiment echoed by New York Governor Andrew Cuomo, who Tweeted, "This is what New Yorkers do — we turn hate into love. And we won't back down — not now, not ever," along with a photo of a swastika that had been turned into a message of love.

"'I guess this is Trump's America,' said one passenger," wrote Locke in his Facebook post. "No sir, it's not. Not tonight and not ever. Not as long as stubborn New Yorkers have anything to say about it."

All over the world, there are people making a positive impact by snuffing out hate. Democrat, Republican, Independent, or other, it's crucial that we stand together against hate, no matter where it comes from or in whose name it's being done.