'We're racist, we're racist, and that's the way we like it,' they chanted. Chelsea didn't like it.

Here's what "we don't tolerate racism" sounds like. High-five to Chelsea, a football club in the U.K., for the unequivocal NOPE. 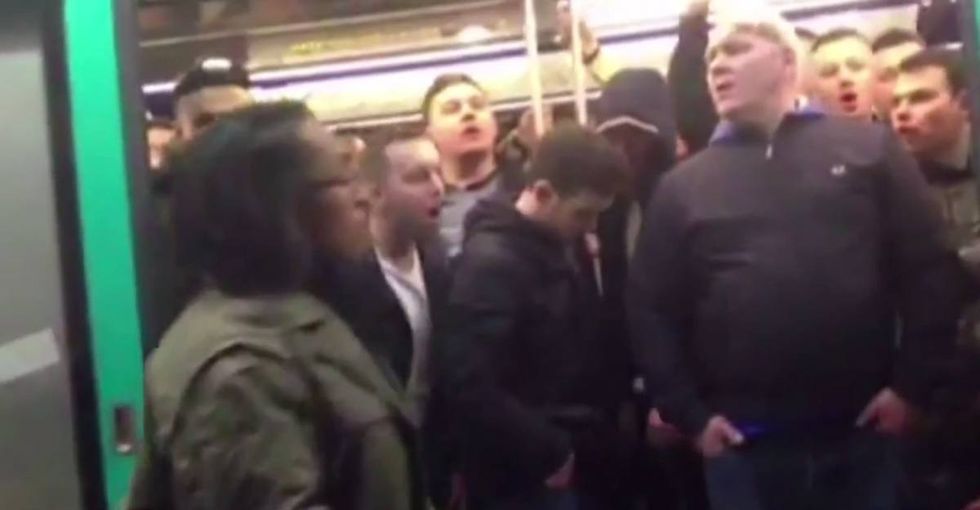 We don't always see racism when it happens.

Unfortunately (and no matter what people say), racism is alive and well all over the world. Often it's covert, meaning it's subtle and not done in a public way. Sometimes it's overt, meaning it's so obvious that no matter how much we want to believe that "we're all the human race!" there's no denying that people are treated differently because of the color of their skin.

Here's an example of an act of racism progressing from easy-to-ignore to blatantly obvious.

A black man was trying to board the Metro train in Paris before a football (soccer, for us Americans) game between British club Chelsea and Paris Saint-Germain. You might see the first few actions as a dude on a train being a jerk, not letting another guy on.

Passengers physically prevent him from boarding the train by pushing him off.

Yes, that's right. The fans actually chanted, "We're racist, we're racist, and that's the way we like it." I couldn't make up a more glaring example of overt racism. It's awful, disgusting, and dehumanizing.

Research has shown ongoing racism can cause many harmful health issues. Those of us who don't experience racism might not see it so easily in day-to-day life. If this had stopped with the fan pushing the man off the train, we might think, "The guy's being a jerk and not letting another man on the full train, but that's not racism!" But it might be. And in this case, it was. We know it because they said it. But racism also happens covertly.

(I should add that some fans who were present denied that it was an act of racism. It's hard for me to believe that, given the entirely audible chants, but anyway ... duly noted.)

Chelsea Football Club responded with a big old NOPE in a written statement.

(If you're unfamiliar with how racist and religious crimes are dealt with in the U.K., you can read more here.)

And I know some people are going to say, "Those are just words." But you know what? Words matter, especially coming from one of the most popular football teams in the world.

This clear statement is how we send the message that racism isn't tolerated. Outspoken condemnation and non-acceptance. High-five.

You can watch the full video clip and hear the chants: